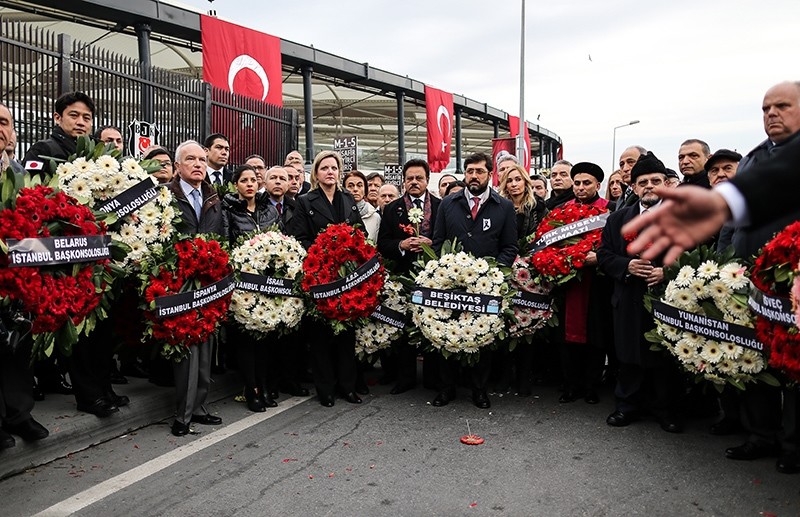 Consul generals from across the world gathered in Istanbul on Monday at the site of Saturday's deadly terrorist bomb attacks.

Representatives from over a dozen countries -- including the U.S., Germany, France, the U.K. and the Turkish Republic of Northern Cyprus -- joined local civic leaders and religious figures.

In a commemoration ceremony at Dolmabahçe Clock Tower in the Beşiktaş district, the foreign diplomats, along with local mayor Murat Hazinedar and religious leaders, left wreaths and offered condolences to the victims' families.

Consuls general from the Netherlands, Greece, Italy, Azerbaijan, Israel, Belgium, Brazil, South Korea and Austria were also among those represented.

The group marched from the clock tower to Beleştepe (now renamed Martyrs' Hill) -- the exact site where the attack happened -- to show solidarity with the Turkish nation.

Beşiktaş mayor Hazinedar told Anadolu Agency the bombs did not just attack Turkey's values but the values of humanity.

Recalling world leaders' solidarity march in Paris after the January 2015 Charlie Hebdo attack, Hazinedar called for a similar display in Istanbul from leaders.

Saturday's twin terror attacks by the PKK's offshoot TAK -- one by a bomb-laden car and the other a suicide bomb -- against riot police near Maçka Park killed 44 people and left 155 more wounded.