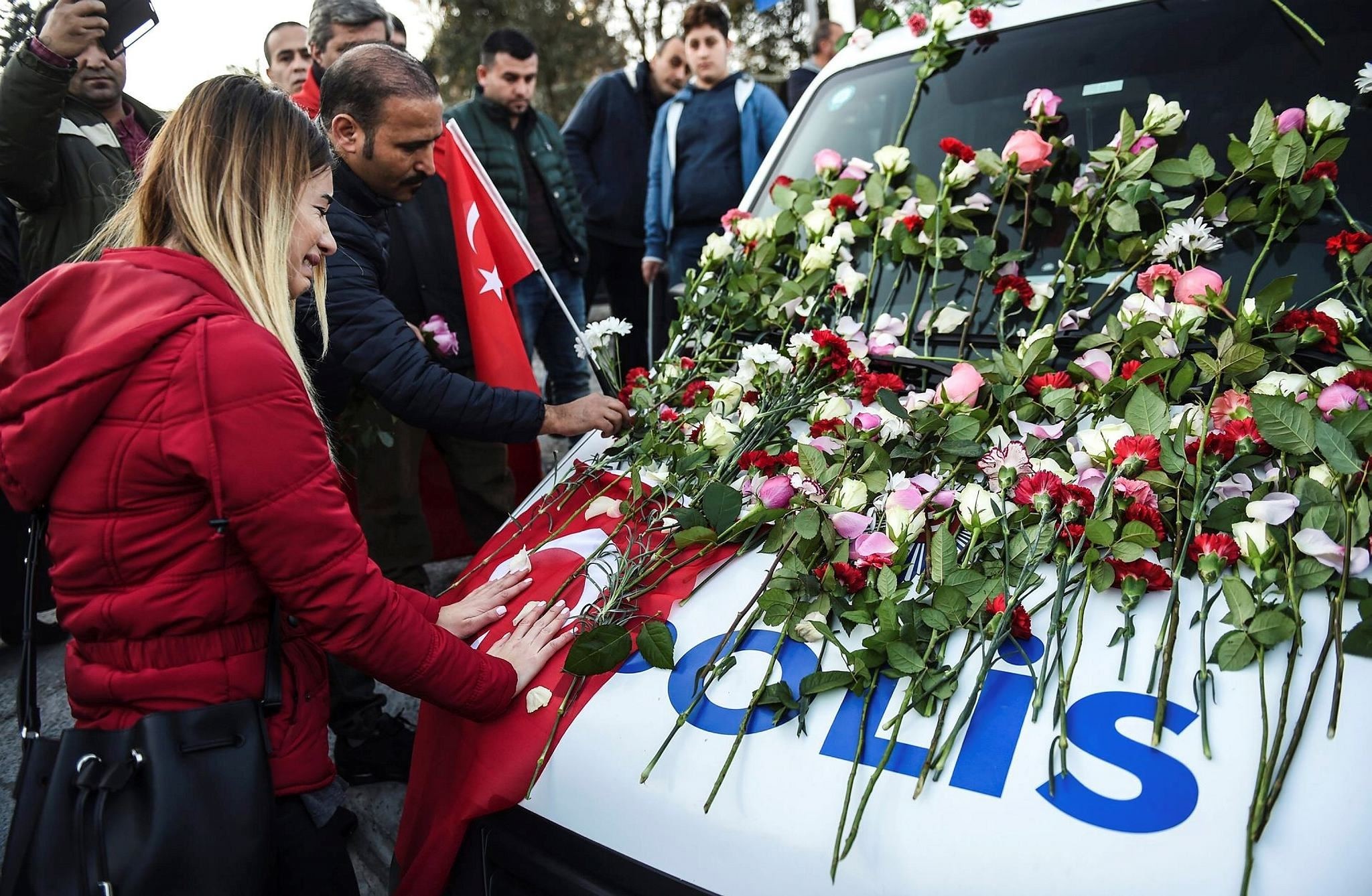 A woman cries next to a police car at the scene of the attack covered with flowers left by mourners. The public marched on Sunday against terror and to remember the victims.
by Yusuf Ziya Durmuş Dec 12, 2016 12:00 am

Two attacks blamed on the PKK terrorist organization that killed 44 people, mostly police officers, in Istanbul on Saturday night, renewed anger against the West's perceived support for the attacks targeting Turkey as the nation stands united in grief and solidarity against terrorism

Saturday night's deadly terror attacks in Istanbul which killed 44 people, mostly police officers, sparked outrage in Turkey against what many call other countries' support for terrorism. The public bonded over resolve against terrorism in the wake of the attacks, which left at least 155 people injured, while the country declared a one-day mourning to remember the victims.

The Freedom Falcons (TAK), a militant group affiliated with the PKK, which carries out terror attacks with high civilian casualties, claimed responsibility for the two attacks, according to a website linked to the group. The TAK last claimed responsibility for a November attack targeting the governorate of Adana province in southern Turkey that left two dead. A car bomb exploded at around 10:30 p.m. local time near the Beşiktaş Football Club's Vodafone Arena Stadium, about an hour after the team played a match against Bursaspor.

The blast site was an assembly point for riot police deployed for the match's security measures. Soon after the first blast, another loud explosion was heard at nearby Maçka Park as a suicide bomber, who drew the suspicion of patrolling police officers, blew himself/herself up as officers approached the suspect. The first attack, that left a large crater at the spot where the car bomb stood, claimed most of the lives while four police officers and one civilian were killed in the second attack. 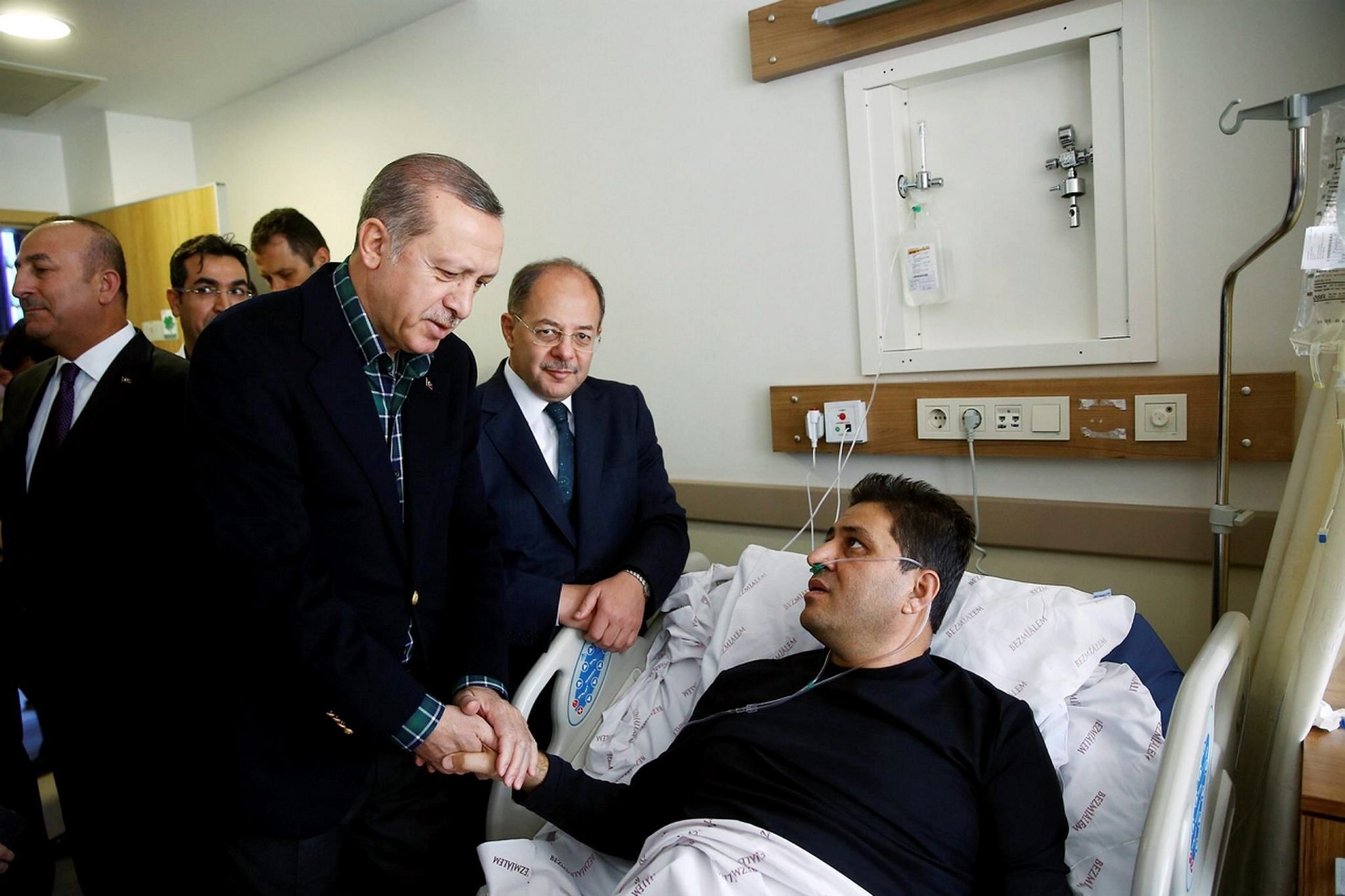 President Erdoğan pays visit to the injured victims at the Istanbul hospitals.

Officials announced 13 suspects were detained in connection with the attack while some media outlets claimed one of the suicide bombers entered Turkey from Syria, from an area controlled by the Democratic Union Party (PYD), a Syrian Kurdish group linked to the PKK. The People's Protection Units (YPG), the PYD's armed wing, had previously threatened Turkey with terror attacks in a video released in February this year. In the video, militants declared war against Turkey.

The TAK, which rose to prominence in the past two years, is viewed by security experts as a convenient way for the PKK, which struggles to legitimize its campaign of terrorism, to deflate blame for civilian casualties in its attacks. The group was also behind a car bombing in Istanbul that killed 12 in June, a March bombing in the capital Ankara that claimed 37 lives and a February bombing targeting a military convoy in Ankara that killed 29 people. 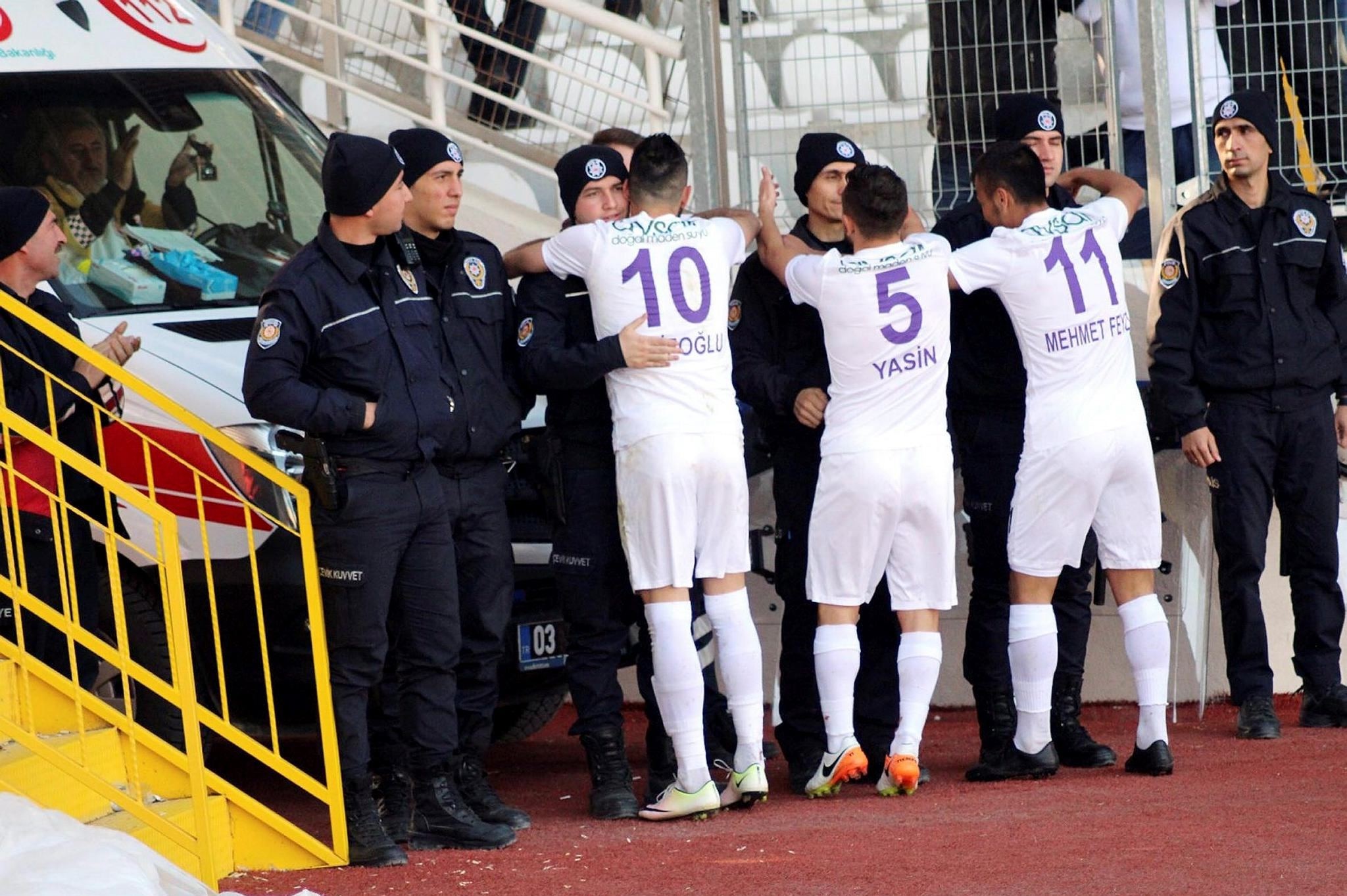 The attacks triggered a campaign to support the police. Players of Afjet Afyonspor joined the campaign by hugging police officers at the stadium during a Sunday match in a local league.

Explosions are the latest in a spate of terror attacks targeting Turkey last year and this year that killed hundreds and one of the deadliest since the bombings at Atatürk International Airport in the city that killed more than 40 people in June. Beset with terror threats which escalated after the Syrian civil war, Turkey seeks to strengthen its counterterrorism defenses by boosting its security forces and seeking assistance from abroad to cut off support to numerous terrorist groups threatening the country, from the PKK to Daesh, the Gülenist Terror Group (FETÖ) and the Revolutionary People's Liberation Party-Front (DHKP-C), but to no avail, as Ankara is frustrated over lack of support for counterterrorism, especially from Europe which it accuses of harboring terrorists openly threatening Turkey. On the contrary, the West gives open support to the terrorist groups and their supporters, Ankara claims, pointing out to the permission granted for pro-PKK rallies in European countries and the lack of a legal process against the several PKK figures who took shelter in Europe and are wanted by Turkey.

Social media users vented anger at the support that the PKK and its affiliates enjoy in Western countries where they are viewed as freedom fighters despite the designation of the militant group as a terrorist organization. "European Union and United States condemn terrorism but how sincere they are while they supply arms to the terrorist groups?" a social media user tweeted. Deputy Prime Minister Numan Kurtulmuş echoed the public concerns for support for terrorism. In a televised interview, Kurtulmuş accused the West of "hypocrisy" on terrorism and said they expected those who condemned the Istanbul attacks to support Turkey's fight against terrorism.

Though the PKK is on the EU's official terrorist organization list, Turkey has complained of member states' indifference to the terrorist group. Ankara argues that although in rhetoric EU leaders condemn PKK terror, the activities of the group in EU countries contradict EU authorities' stances. President Recep Tayyip Erdoğan has repeatedly said that Western countries "pick and choose" between terror groups. Erdoğan has said previously that when the PKK carries out attacks in Turkey, the Turkish nation does not receive the same empathy, compared to the attacks against the West carried out by the Daesh terrorist group. The European Union is also under fire by Ankara as EU officials frequently criticize Turkey's counterterror operations as a crackdown on human rights.

Funeral ceremonies were held for the police officers who died in the blasts on Saturday at the headquarters of Istanbul police yesterday. The flag-draped coffins of the victims were surrounded by their teary-eyed relatives while President Recep Tayyip Erdoğan, Prime Minister Binali Yıldırım, ministers and other senior figures extended their condolences to grieving relatives.

Erdoğan also visited the injured at Istanbul hospitals and spoke to the reporters afterwards Sunday. "Never doubt that Turkey, the nation will not stop the fight against terrorism. We will not be intimidated and will not step back. We have our shrouds ready and we are people of a faith that considers martyrdom as the ultimate honor," Erdoğan said in emotionally-charged statements. Erdoğan said the perpetrators targeted police officers fulfilling "a national duty" of protecting the citizens. "They should be aware that they would not get away with it and will pay the highest price," he said.

Interior Minister Süleyman Soylu said at the funeral ceremony that Turkey would retaliate the attacks. The minister fumed at terrorists and their "supporters" and his speech targeted the PKK which claims to be fighting for a Kurdish self-rule in the southeast of Turkey. "Where is that country you wanted to establish? You have no lives other than a life on the run, a life mired with treason and you received nothing but curses. You are nothing but puppets, pawns of some dark powers, you are nothing but slaves and hitmen of your dark Western partners. No one will feel sorry for you when you die," Soylu said.

A group of citizens gathered in front of Dolmabahçe Mosque near the blast site and marched to the scene waving Turkish flags and condemning the attacks. They left flowers at the site of the blasts.

The public also took to the social media to express their support for police after the explosions. People shared their support with the hashtag #PolisiminYanındayım which roughly translates to "I support my police," while social media users encouraged others to approach any police officer they saw on the street and express their condolence and offer a hug. Players of Çorluspor, a football team hailing from northwestern Turkey, embraced police officers deployed at the stadium for security to contribute to the social media campaign.
Last Update: Dec 15, 2016 12:42 pm
RELATED TOPICS