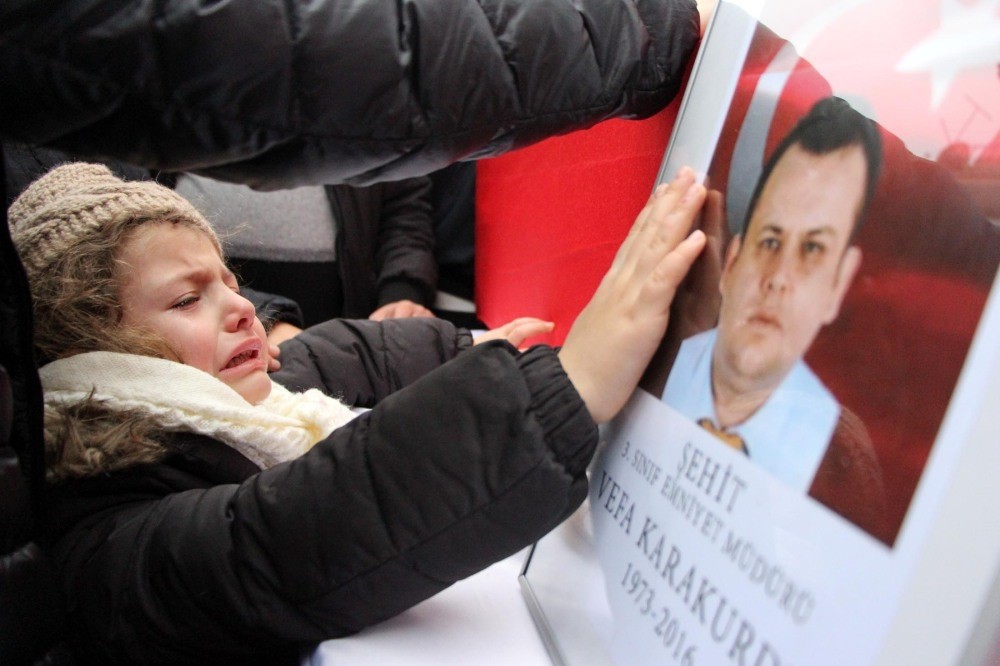 Six-year-old Duru Karakurdu cries while touching the photo of her father Vefa Karakurdu, veteran police chief died in the blasts.
by Daily Sabah with Agencies Dec 13, 2016 12:00 am

Anti-terror protests erupted in Turkey on Sunday and Monday as the country mourns the 44 killed in two Istanbul attacks by the terrorist group PKK/TAK. Foreign diplomats joined a march against terrorism while victims were buried yesterday

Saturday night's terror attacks in Istanbul that killed 44 people and injured dozens sparked outrage against terrorism in Turkey which saw a string of large-scale attacks this year and last year by several terrorist groups. Locals, foreign diplomats and people from all walks of life attended the marches against terror and held vigils for the victims.

In scenes reminiscent of this summer's democracy rallies to protest the coup attempt on July 15, people all across the country took to the streets, waving Turkish flags and vowing not to bow down to terror threats.

The Kurdistan Freedom Falcons (TAK), an affiliate of the terrorist group PKK, has claimed responsibility for the car bombing and suicide bombing near Beşiktaş stadium that targeted police officers and civilians. On Sunday morning, people poured to the site of the blasts to condemn the terrorist group and by Sunday night, major rallies were held all across the country that declared one day of mourning for the victims.

In Istanbul, a large convoy of taxi drivers drove round the stadium with Turkish flags hanging out of their windows while another group staged a rally on Vatan street where the headquarters of the Istanbul police is located to show their solidarity with the law enforcement.

Demonstrator Gülay Fırat said she wants widows and orphans to be avenged. "No one can tear this country apart," she told The Associated Press.

"Damn the PKK" and "We don't want the PKK in Parliament" chanted the crowd, calling for the reintroduction of the death penalty.

Beleştepe, the hill where the first bomb attack took place, to leave wreaths in memory of the victims yesterday. Beleştepe, renamed as Şehitler Tepesi (Martyrs Hill) after the attacks, has drawn crowds since Sunday as people paid tribute to the victims. Thirty consul-generals from countries including the United States, Germany and France, locals, priests and rabbis walked to the spot and observed one minute of silence in memory of the victims. A group of locals were angered at the diplomats visiting the site. "They killed them and now they leave flowers," a man removing the wreath left by Dutch Consul-General Robert Schuddeboom said. The public is angered at the perceived support for terrorist groups, particularly the PKK, by Europe. The West gives open support to the terrorist groups and their supporters, Ankara claims, pointing out the permission granted for pro-PKK rallies in European countries and the lack of a legal process against several PKK figures that took shelter in Europe and are wanted by Turkey. Social media users vented anger at the support that the PKK and its affiliates enjoy in Western countries where they are viewed as freedom fighters despite the designation of the militant group as a terrorist organization. "European Union and United States condemn terrorism but how sincere they are while they supply arms to the terrorist groups?" a social media user tweeted. Deputy Prime Minister Numan Kurtulmuş echoed the public's concerns for the support against terrorism. In a televised interview, Kurtulmuş accused the West of hypocrisy on terrorism and said they expected those who condemned the Istanbul attacks to support Turkey's fight against terrorism. U.S. Consul-General Jennifer Davis, quoted by the Turkish media, said in a statement yesterday the United States would continue siding with Turkey in its fight against terrorism. "Our thoughts and prayers are with the people of Turkey and with victims of this cowardly attack. We respect the courage of the Turkish police officers killed and injured on duty and share your grief," she was quoted as saying.

Yesterday, funerals were held in the hometowns of the police officers. President Recep Tayyip Erdoğan, the prime minister, ministers and other dignitaries were among the high-ranking officials attending the funerals.

Erdoğan attended the funeral of Haşim Usta, one of the slain police officers, at a mosque in Istanbul's Fatih district before he paid a brief visit to the headquarters of Istanbul's riot police in the city's Bayrampaşa district. Erdoğan, who spent Sunday visiting the injured at Istanbul hospitals, visited the sites of the two blasts yesterday along with Interior Minister Süleyman Soylu. The president prayed for the victims at the scene of the first blast adorned with large Turkish flags and flowers.

An unprecedented display of support for the police followed the attack with a campaign to support police gaining traction on social media. Social media users urged others to express condolences to any police officer they run into and hug them. Celebrities, including popular singers Orhan Gencebay and Mustafa Ceceli, shared photos of their visits to police stations as part of the campaign.

Yasin Öztekin, a Galatasaray football player, made headlines when a photo of the young player emotionally embracing police officers deployed by the pitch for match security during a domestic league match. Social media users heaped praise on the player for his support to the police.
RELATED TOPICS