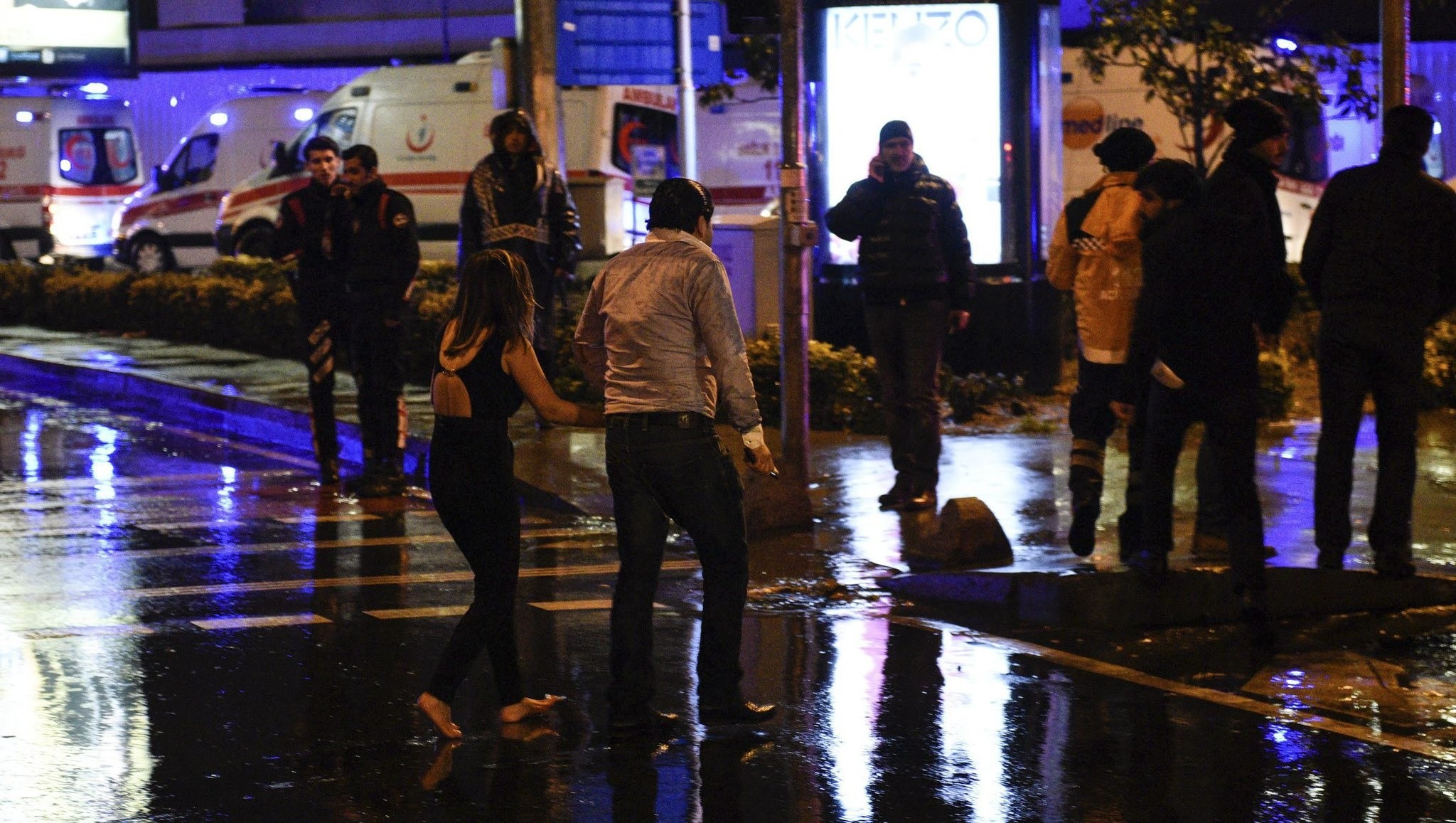 They had come to celebrate the New Year in Istanbul at the exclusive Reina nightclub overlooking the Bosphorus, and to enjoy a city reputed for its diversity. But just over an hour into 2017, 39 people including an Indian Bollywood film producer, a Turkish waiter, a Lebanese fitness trainer and a Jordanian bar owner, were forced to hide when a gunman intent on killing as many people as possible stormed through the club.

At 01:15 a.m. on Sunday (2215 GMT), an armed assailant sprayed the entrance of the club with gunfire, killing two people before entering the venue and causing carnage. The seven-minute rampage left 39 dead and dozens injured, the majority of whom were foreigners on holiday, and was claimed by Daesh. The victims included citizens of Turkey, Saudi Arabia, Lebanon, Iraq, France, Tunisia, India, Morocco, Jordan, Kuwait, Canada, Israel, Syria, Belgium, Germany and Russia.

"As soon as he entered the club he started firing and he didn't stop. He fired non-stop for 20 minutes at least," said Younis Turk, a French citizen of Turkish origin. "We thought that there were several of them because it just didn't stop," he said.

Turk described the ensuing panic in the club: "In the panic we were running all over, we weren't really watching who was around us. But people who were running with me were hit."

"I think back to those moments; I can't erase them from my memory. The people panicking, the blood, the noise of the gunshots, the explosions. That's what I keep on thinking about," Turk's cousin Kodat told Agence France-Presse.

Shot in the arm and slumped behind a table, Francois al-Asmar said he played dead as the gunman walked through the exclusive Istanbul nightclub shooting the wounded as they lay on the ground. "I was hiding behind the table, sitting on the floor, but my shoulder must have been exposed. He was shooting us on the floor... I acted dead so he didn't keep shooting me," the Lebanese survivor said.

Al-Asmar also said it was his passport that saved his life, with a bullet grazing the document: "It saved my life because I was carrying it near my heart," he said, talking from his hospital bed.

Turk said they were taken out through the basement to avoid seeing the main room. "But there were already a few corpses on the terrace and there was blood everywhere and broken glass. The windows from inside going onto the terrace were broken as well."

The attack evoked memories of the Nov. 2015 carnage in Paris when Daesh unleashed a gun and bombing rampage on nightspots in the French capital, killing 130 people including 90 at the Bataclan concert hall.

Turk also told Europe 1 the attack made him think of the Bataclan as well. "It was the same. [The attacker] came to [kill] as many victims as possible."

The gunman fired between 120 to 180 bullets during his onslaught, then changed his clothes before escaping.

"He didn't want to just injure them"

Mehmet Yılan, a barman at Reina for 12 years, said the attacker deliberately targeted the most crowded areas of the club, which sits on the shore of the Bosporus in Ortaköy, an Istanbul neighborhood packed with cafes and restaurants.

"He stormed in and immediately headed for the people to the left, which is always more crowded... I wonder if he came here before because he seemed to know where to go," Yılan said, describing how his manager yelled at people to run. "He was shooting randomly but aiming for their upper bodies. He didn't want to just injure them."

Yılan escaped into a back room with five customers and two other bar staff, then went downstairs to a terraced area on the edge of the water. Despite the icy, snowy weather, some people jumped into the water to escape the gunfire.

"He kept shooting all throughout. I called for our boat which transfers our customers, but he kept firing toward the sea too. The boat couldn't approach," Yılan said. He spoke to Reuters at the funeral of his colleague, Fatih Çakmak, a security guard who worked at the club and had survived a suicide bombing targeting police at a soccer stadium a few kilometers away just three weeks earlier.

Lito German, a Filipino living in Saudi Arabia who works in marketing, was in Istanbul for the first time with his wife and daughter and was approaching the club as the attack began. "We were about 100 meters away and started seeing people fleeing toward us. Most were very well dressed, though many were barefoot and looking shaken and scared," he said.

"We were actually meant to go to another club, but we didn't want to be in a very big place due to security issues, and we found Reina by Googling 'Istanbul's best nightclub.'"

Among the dead were Abis Rizvi, 49, a Bollywood producer who was in the middle of making his second film, and Khushi Shah, a fashion designer in her 20s, both from Mumbai. The Indian government said it was making arrangements to help the families as they come to Turkey to collect the bodies.

Lebanon sent a plane to carry back the remains of three of its citizens who were among the dead.

One of the other victims was Mohammad al-Hout, a 22-year-old Syrian, who had fled the civil war devastating his country and carved out a new life for himself in Turkey, like 3 million others from his homeland. Al-Hout, who hailed from Syria's Aleppo, was in the nightclub with customers of the travel agency for which he worked as a tour guide. The multilingual young man who spoke English, German and French as well as Turkish and his native language, fled to Turkey two years ago. He had taken advice from his mother, who opposed him taking part in the conflict in Syria, according to relatives who attended al-Hout's funeral in Istanbul yesterday.

Al-Hout was born on Jan. 1, 1994. "It is the worst of coincidences," the Turkish owner of his travel agency told reporters at the funeral. "He was a perfect guy, a well-educated, cultured gentleman. He fled terror in Syria and died in an act of terror in Turkey," Mehmet Ali Sayan said. Adnan al-Hout, the young man's uncle, who also attended the funeral, echoed the sentiment. "He was a university student in Syria and the family sent him here just so he would not be involved in the conflict," he said.

Abdulased Ashki, another uncle of the victim, pointed out that most killed in the nightclub attack were Arabs and from Muslim countries. "[The terrorist] views himself as a Muslim but it has nothing to do with Islam. I hope he will be captured as soon as possible and will get the punishment he deserves," he said at the funeral.

Elias Wardini, 26, a personal trainer, had posted a picture on Instagram a few hours before the attack, posing in the Istanbul snow with fellow Lebanese victim, Rita Chami.

"I really don't know how this demon, I can't even call him a terrorist, was able to reach here despite all this intelligence and extraordinary security measures," said Reina's owner, Mehmet Kocarslan.

'I will come again'

William Jacob Raak from the U.S. was one of the survivors. Speaking to reporters at Istanbul's Atatürk International Airport on Monday ahead of his flight to the U.S., Raak said he was with nine friends in the nightclub at the time of the attack.

"I was shot on the ground. I just let him shoot me," Raak told NBC News. "You just have to stay as calm as you can... I took a bullet." Despite this, Raak said he wants to visit Turkey again and wished a speedy recovery for those injured in the attack. He also praised Turkey as a very beautiful country with good people.

French survivor Turk also said, "[This attack] doesn't mean that I won't be coming anymore. For me Turkey, Istanbul, is one of the nicest cities in the world and I will keep on coming again and again."