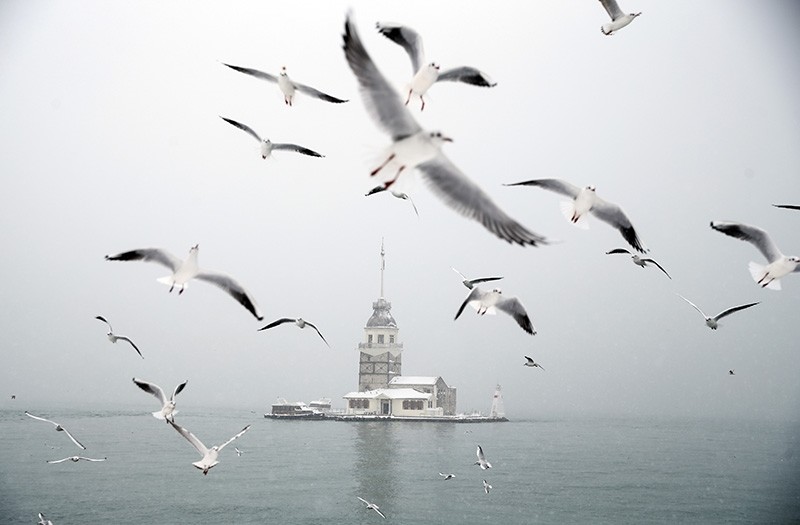 Heavy snowfall in Istanbul paralyzed traffic for a third straight day on Monday with the Bosporus closed to maritime traffic and hundreds of flights cancelled, again

Heavy snowfall and blizzards took hold of Istanbul and most of the western cities yesterday. This is the third day in a row that bad weather has taken its toll on daily life in the city, causing the Bosporus to close to maritime traffic, along with schools going on snow holiday and hundreds of flight cancellations.

With freezing temperatures and heavy winds, the Bosporus, one of the world's busiest-shipping bottlenecks, was closed due to poor visibility, the Turkish Coast Guard said.

All passenger ferry services, popular with commuters between the Asian and European side of Turkey's largest city, were also cancelled.

Schools were shut down across the city, Istanbul's Governor Vasip Şahin said on his Twitter account, while the closure was extended to Tuesday. The governor also ordered an early end to work hours for public sector employees at 3:30 p.m. instead of 5:00 p.m. The governorate had also imposed a ban on large trucks to ease traffic.

Istanbul experienced the heaviest snowfall since 2009 over the weekend, with snow depth reaching 120 centimeters (47 inches) in some areas, Istanbul Mayor Kadir Topbaş said on Sunday.

Around 7,000 municipality personnel worked with 1,340 vehicles throughout the city to keep roads in the city open as snow fell for the third-straight day.

Topbaş said that around 90 tons of salt and 370 tons of ice-melting solution were used to keep Istanbul roads free of snow and ice.

Hundreds of flights have been cancelled over the last three days, stranding thousands of international passengers in Istanbul.

Flag carrier Turkish Airlines (THY) cancelled some 277 domestic and international flights scheduled to depart from Istanbul's Atatürk International Airport. Thousands of passengers from cancelled flights were accommodated at hotels. Some delayed flights resumed as crews gradually cleared the runway and the weather periodically eased, leading to long queues at the airport yesterday. Adem Esiroğlu, one of the passengers, told İhlas News Agency he had been staying at a hotel since Friday after his flight to Turkmenistan was delayed. "Our flight time changes every day and every day it snows," he says.

Low-cost carrier Pegasus, which mainly operates out of Sabiha Gökçen Airport on Istanbul's Asian side, announced cancellations for 74 flights yesterday. The carrier has cancelled some 228 flights since the onset of the heavy snowfall on Friday.

Authorities warned that more snowstorms are predicted for today in Istanbul, potentially adding another layer to the blanket of snow. Snow depth reached 122 centimeters in Çatalca on Istanbul's far-western side, while it was 55 centimeters in the Sarıyer district on the shores of Bosporus.

Despite clearing efforts, side streets were seriously affected by heavy snowfall that left the traffic immovable, while the highways were clear with little traffic in the rush hour.

Experts have been warning both pedestrians and motorists about icy roads and sidewalks, while trees and roofs made of light material also pose a danger. On Istanbul's Asian side, a large number of trees gave way to heavy snow and collapsed. No casualties were reported in the incidents, but two cars were damaged by toppled trees.

In the city's Maltepe district on the Asian side and the Avcılar district on the European side, crews used snowplows to clear the road to residences of patients in need of immediate-medical care in scenes resembling the rescue efforts common during the winters of remote-eastern villages.

Turkey has already been bombarded with heavy snowfall that is particularly affecting the eastern and central regions, while the country's west has largely been spared from the harsh winter except for chilly temperatures and occasional rainfall. However, traffic on the roads connecting cities in central and northern Turkey was disrupted for hours due to blizzards.

Temperatures in western cities including Bursa, Balıkesir, Çanakkale, Yalova, Eskişehir, Kütahya and Bilecik dropped as low as minus 17 degrees Celsius (1.4 degrees Fahrenheit) yesterday. Snow-clearing crews worked around the clock to clear roads to remote neighborhoods and villages coated by continuous snowfall for the past three days. Police also took measures on the roads and stopped cars unfit for winter conditions, instructing drivers to install winter tires and tire chains.