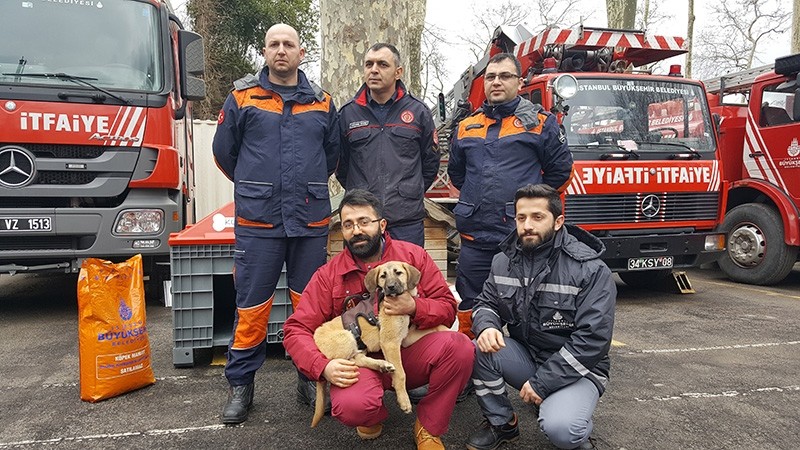 A puppy that made headlines in Turkey after it was saved from a 70-meter-deep borehole in Istanbul's Beykoz district now has a new home with the firefighters who led its 11 day-long rescue efforts.

The three-month-old Kangal (native Turkish guard dog) puppy named Kuyu ("well" in Turkish) was handed over to the fire station in Beykoz Thursday after its treatment was completed at the animal hospital in the Fatih district of Istanbul.

Ümit Ahmetoğlu, a firefighter at the station, said that the rescue efforts lasted for a long time because Kuyu had a two-square-meter wide place to hide inside the hole, and they had to wait for the puppy to reach out in order to intervene. "We started our intervention in the first three hours after we found Kuyu. Our struggle paid off after ten days. We are very content, and we are very happy that he became our dog in the end. Now he is our guest. He will live with us, he will be a part of our team," Ahmetoğlu said.

Firefighter Veysel Sivri, credited with devising the apparatus for rescuing Kuyu, said that after Kuyu is seven-months-old, they are planning to raise him as a rescue dog if possible. He added that it was the first time that their station took part in such a rescue operation, and now they have the experience to intervene in such cases.

Vedat Zor, another firefighter who took part in the rescue efforts, said that they are very content that the dog's owners decided to give the puppy to their station, among all rescue crews.

Turkish Plastics Industrialists' Association (PAGDER), donated a kennel to Kuyu, however, he spends most of his time nearby the heater located in firefighters' waiting lounge because of the cold weather.

The puppy was stuck in a pit 30 centimeters wide and was first noticed by locals who heard it barking. Authorities were alerted, and its story quickly began to trend on social media. Municipality workers and animal rights activists rushed to the scene first, but efforts to retrieve the puppy through the narrow mouth of the borehole while it was stranded in the broader bottom section were futile. Desperate to keep it alive, people delivered food and water with the help of a rope lowered to the canine that was growling in pain.

Later, rescue experts from the Disaster and Emergency Management Authority (AFAD) arrived, and the waterworks authority also provided assistance. Crews tried their best to try different methods to rescue the dog, from a primitive mechanism made of rope and pulleys to a "robotic arm" developed by students from a high school. Then, Turkish Hard Coal Enterprises (TTK), a state-owned mining company, took charge of the efforts and the next day "Kuyu" was liberated, to the relief of everyone worried about the puppy's fate.

Sivri said that he improvised a cylinder to pump air into the borehole. With the help of crews from AFAD and the TTK, as well as other firefighters, he connected it to a controller stick and installed a night vision camera. "[The apparatus] can operate freely in narrow spaces, and after some hours, we managed to corner the scared dog in a corner, and with a lasso (similar to a leash) grabbed it by the neck. Then we pulled it to safety," said Sivri, who has worked on countless other animal rescue operations. He said all the firefighters had volunteered to stay long after their shifts had ended.