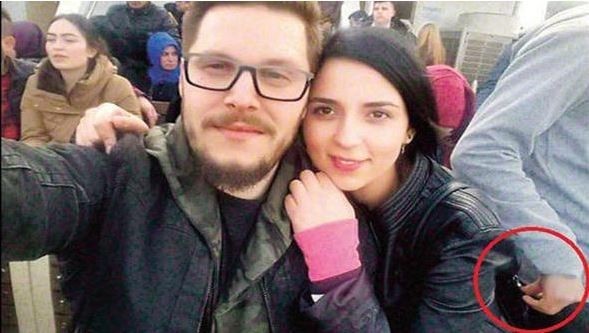 The exact moment a pickpocket swiped a woman's wallet in Istanbul was captured on film in a selfie taken by the victim.

The event occurred aboard an Eminönü-Üsküdar ferry, which links the European and Asian sides of Istanbul, while Elçin Özge Cörüt taking her guests from Germany on a sightseeing trip, Turkish daily Habertürk reported on Wednesday.

Just as the ferry was about to dock in Üsküdar, her friend Fatih Özkan suggested that they take a photograph together.

While the two were posing for the selfie, Cörüt felt like someone was touching her handbag.

After the picture was taken, Cörüt checked inside her purse, and realized that her wallet was missing.

As soon as she realized that her wallet was stolen, Cörüt asked her friend to check the picture they had taken moments earlier. The photo revealed the exact moment the pickpocket was snatching the wallet from Cörüt's purse.

Despite the fact that the pickpocket's body was not completely visible in the photograph, Cörüt could still identify the wallet-thief.

Caught red-handed, the suspect, identified with the initials M.Ö., denied the allegations.

However, police officers aboard the ferry intervened, and searched the suspect after reviewing the photo evidence.

Police located Cörüt's stolen wallet inside M.Ö.'s underwear. After the ferry docked, the suspect was taken to the Üsküdar district police department. The selfie will reportedly be used as a piece of evidence against the suspect in their upcoming trial.