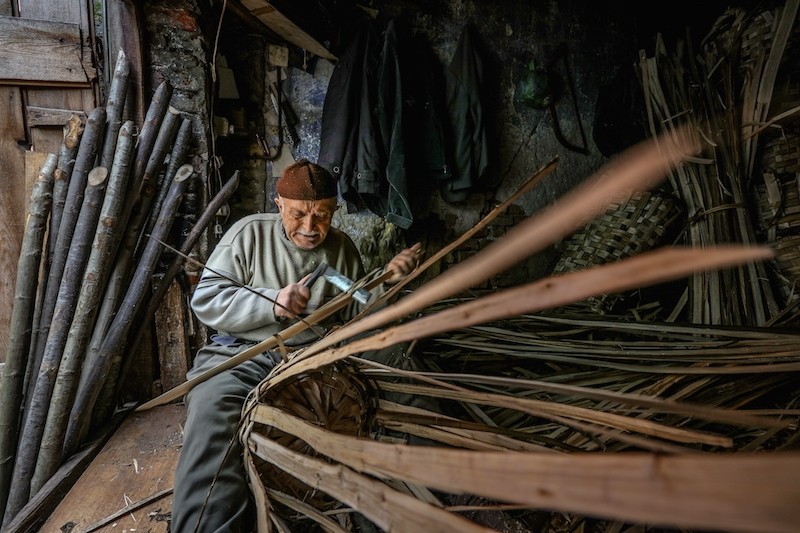 Eighty-four-year-old Kemal Kayaoğlu usta (master) continues his craft of traditional basket weaving, which he learned from his father at age 11, in a small workshop in Istanbul's Fatih district.

Kayaoğlu comes from the town of Abana, in northern Turkey's Kastamonu province and moved to Istanbul with his family decades ago. He and his father rented a shop in the Eminönü district of Fatih to weave and sell baskets.

Learning the subtleties of his profession from his father since he was a young boy, Kayaoğlu has been making different kinds of baskets for 73 years.

Every day after Morning Prayer, Kayaoğlu takes the bus from Eyüp to open his shop. He is a beloved member of the community, and those who pass him on the road acknowledge him with appreciation and respect for continuing to work despite his advanced age.

Kayaoğlu told Anadolu Agency that years ago, people used the baskets to carry everything from coal to fruits and vegetables.

Explaining that basket weaving was more common in the past, Kayaoğlu said, "Today the profession has been destroyed by plastic products, and there is only one other person in Eminönü who weaves baskets like me."

Kayaoğlu explained that he married and lived with his eight children on the top floor of the shop, where he wove the baskets to make a living for his family.

Fifteen years ago, the house and shop were damaged by fire, and Kayaoğlu moved his home to Eyüp, but he did not abandon the 60-year-old shop.