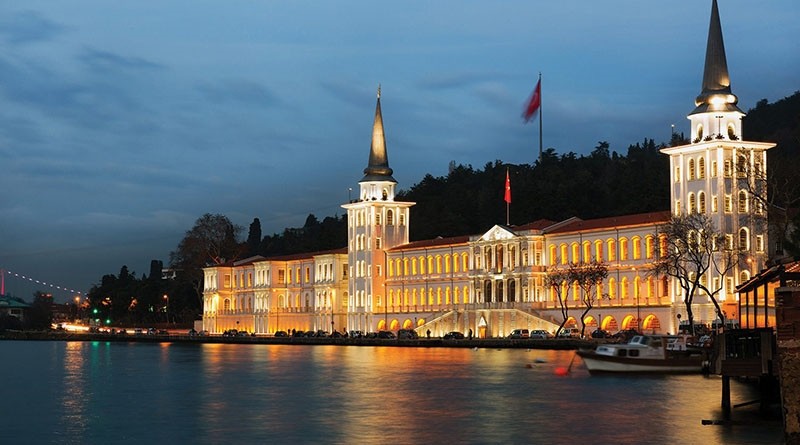 The iconic building of the former Kuleli Military High School located on Istanbul's Asian side of the Bosporus strait, will be turned into a museum, Minister of National Defense Fikri Işık said, spelling the end for the place whose officers and cadets were involved in last year's coup attempt.

Turkey's post-coup transformation for its military after the July 15 coup attempt, which killed 248 people, extends to the school, the oldest of its kind in the country.

Işık, who spoke to journalists during a reception at the Grand National Assembly for Turkey's April 23 National Sovereignty and Children's Day, announced that the school's building, an Ottoman-era landmark notable for its pointed towers and white exterior, will be converted into a museum while plans are also underway to re-purpose vast green spaces inside the school's sprawling lands.

Kuleli was one of the places at the heart of the coup bid blamed on infiltrators of the Gülenist Terror Group (FETÖ) in the army. Cadets, mostly those persuaded by their commanders at the school and several military officers serving as administrators and teachers at Kuleli, joined the coup attempt. Twenty-two people were killed when the pro-coup troops from Kuleli invaded the Çengelköy neighborhood where the school was situated, in an attempt to quell public resistance to the putsch. Approximately 250 residents stood up against efforts to take over the shore connecting the military school to Bosporus bridge access and managed to divert the pro-coup soldiers.

Işık has said that the museum, which will be run by the Ministry of Culture and Tourism, will be specialized on military history and said the decision to convert the place into a museum was upon the instruction by the president.

The Kuleli Military High School was one of the critical locations of the July 15 failed coup attempt when residents from the Çengelköy neighborhood took to the streets after putschists from the school joined efforts to topple the Turkish government.

After the July 15 coup attempt, Kuleli joined a list of military schools to be closed down for transformation as Ankara felt a need to reform the army plagued by supporters of the putsch. There were rumors that the school would be razed but Ankara dispelled the rumors and pledged to preserve this Ottoman legacy.

The decision came with the requests and suggestions of local residents, who had wanted to see an educational institution to take up residence in the historic buildings. Despite the fact that some of the residents were connected to the school through their own family histories of military service, they no longer wished to see soldiers in their immediate neighborhood. In order to erase the bitter memories, the people of Çengelköy suggested that the military school be turned into a library, university or social facility.

Can Cumurcu, headman of the Çengelköy neighborhood who was injured when pro-coup troops from the school opened fire on him and others resisting the coup, said they expect the school to be turned into a library, university or social facility. Speaking to Daily Sabah in an August interview, Cumurcu has said the residents would not want to see "anyone wearing a military uniform" in the neighborhood as the coup attempt traumatized them.

Other military schools such as the Işıklar Lisesi in Bursa province have also been shut down in the aftermath of the coup attempt. Işık, explained that this year, student applications to institutions in question could not be taken into consideration, as the percentage of FETÖ members at these schools had been especially high and it would take further efforts to determine which students were members of the FETÖ terrorist organization.

The Kuleli Military School was founded in 1845. The compound had been handed over to the Janissaries during the time of Sultan Selim I and, due to a building remaining from the Byzantine period and its beautiful environment, it became known as "the garden with a tower" (Kuleli Bahçesi). The building, built by famed Armenian architect Garabed Balyan, dates back to the era of Sultan Abdülmecid I, with construction ending in 1843. In 1871, the architectural complex was redesigned and took its current form. It saw constant change in its use since then, including its conversion to a hospital during the Ottoman-Russian wars and as a dormitory for Armenian orphans in the 1920s. After the foundation of the Republic of Turkey, it served as one of the most prestigious military schools in the country, training future generals of the powerful Turkish army.