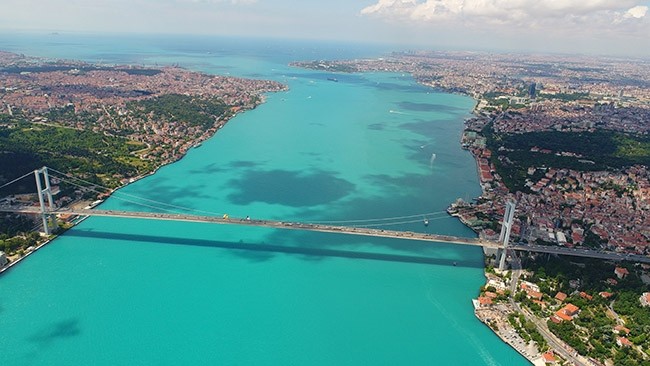 NASA has put an end to the confusion over the mysterious hues of the Bosporus, which have changed from dark blue to a bright turquoise color in recent days.

The turquoise color stretches along the Bosporus to a large portion of the western Black Sea, which puzzled residents and raised questions about pollution.

NASA explained that the color was caused by phytoplankton, single-celled microscopic organisms that make food from sunlight and nutrients in the water. The flow of the Danube and Dnieper Rivers into the Black Sea provides nutrients for the tiny creatures.

Turquoise swirls in the Black Sea. These eye-catching hues indicate the presence of organisms known as phytoplankton https://t.co/hKC0Te3TaW pic.twitter.com/151hZ04H7s

The Aqua satellite's Moderate Resolution Imaging Spectroradiometer (MODIS) captured its first images of the phytoplankton boom in the Black Sea on May 29.

Fishermen have predicted a rise in anchovy yields this year due to the plankton, which provide food for fish and shellfish. However, when in large groups, phytoplankton can suck oxygen from the water and damage other marine life.

The bright color itself is produced by the plankton's reflective plates, which when viewed from a distance lighten the normal color of the water.

After the perplexing phenomenon emerged, some took to social media to express fears that there had been a pollution spill while others even suggested the changing hues could be linked to the recent earthquake that rocked the Aegean region on Monday afternoon.

However, scientists said there is no mystery behind the color change, which is also accompanied by a pungent smell.

Ahmet Cemal Saydam, professor of environmental science at Hacettepe University, told the Doğan news agency that the cause of the change is a surge in the number of micro-organisms known as Emiliania huxleyi, or Ehux.

"This has nothing to do with pollution," he said, adding that this is particularly beneficial for the increased presence of anchovies, a popular dinner staple in Istanbul.

"Across the Black Sea there has been an explosion of Emiliania huxleyi which is a blessing for the Black Sea," he said.

One of the most successful life-forms on the planet, Emiliania huxleyi is a single-celled organism visible only under a microscope. Its astonishing adaptability enables it to thrive in waters from the Equator to the sub-Arctic.