Erdoğan calls on western leaders to choose between Turkey and terrorism 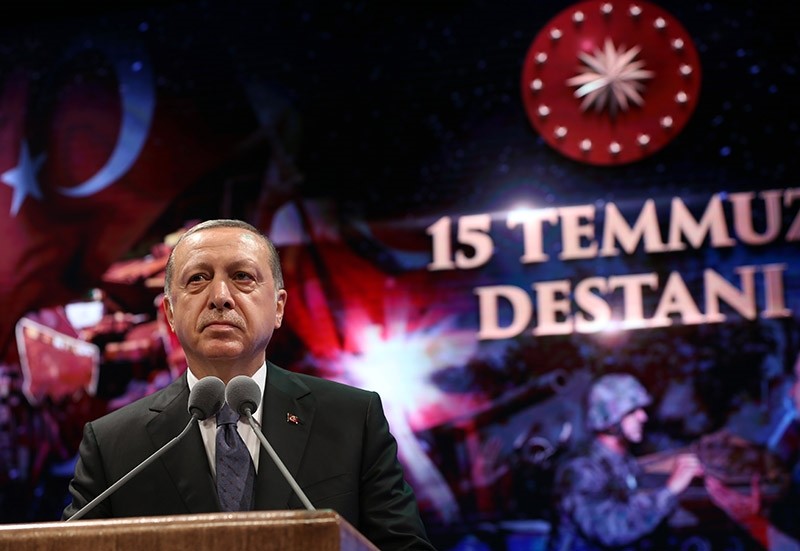 President Recep Tayyip Erdoğan asked western leaders to make a choice between Turkey and terrorist organizations in an article he wrote for British daily the Guardian.

In the article published Saturday on the first anniversary of the July 15 coup attempt, Erdoğan wrote that there is "no way to sugar-coat this betrayal of Turkey's friendship," adding that it is incompatible with bilateral relations and fundamental values alike.

"Today, western leaders have a choice between standing in solidarity with terrorists or regaining the favor of the Turkish people," he said.

The president underlined that the thwarting of the coup marked a "turning point in the history of democracy," adding that it would be a source of hope and inspiration for all people who live under a dictatorship.

He also slammed western leaders for not fully appreciating the significance of what happened in Turkey on July 15, 2016.

"Instead of expressing solidarity with my countrymen, a number of western governments and institutions opted to wait and see how the crisis would play out," Erdoğan said.

"Their hypocrisy and double standards deeply disturbed the Turkish people, who risked everything to defend freedom," he added.

In his article, the president also stressed the importance of bringing Fetullah Gülen and his followers to justice, saying evidence proves they were behind the foiled coup.

It "isn't just important for Turkey but for democracy everywhere," Erdoğan said.

"Our goal is to prosecute criminals to the full extent of the law while building our country's resilience to future attacks."

According to the Turkish government, the Gülenist Teror Group (FETÖ) and its U.S.-based leader Fetullah Gülen orchestrated the defeated coup of July 15, 2016, which led to the death of 250 people and injured nearly 2,200 others.