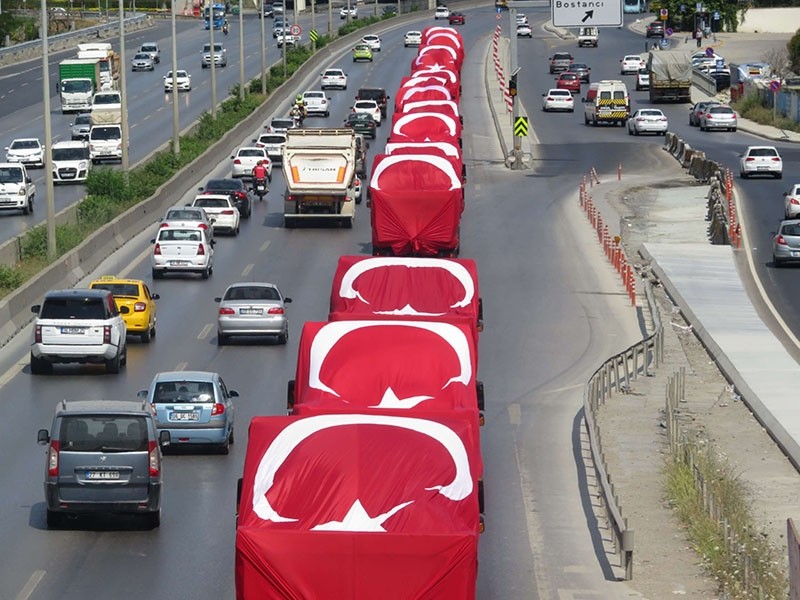 The July 15 Martyrs Bridge, formerly known as the Bosporus Bridge, has been closed to traffic at 12.00 p.m. local time as part of the ongoing preparations for the commemoration ceremonies of last year's failed coup attempt.

The bridge, which spans the Bosporus and connects the European and Asian sides of Istanbul, will be part of the planned the "National Unity March."

The "National Unity March" will start at 6:30 p.m. and is expected to be attended by thousands, including President Recep Tayyip Erdoğan and families of the victims and survivors of the failed coup attempt.

Meanwhile, trucks belonging to the Istanbul Metropolitan Municipality, which were used to prevent tanks from leaving barracks on the night of the coup attempt, formed a convoy in Istanbul's Kartal district on the Asian side.

The convoy of 22 trucks all covered with the Turkish national flag headed to the July 15 Martyrs Bridge, using the D-100 highway.

The trucks will be used for blocking roads near the bridge.

The Bosporus bridge was one of the first locations secured by putschists during the initial stages of last year's July 15 coup attempt. Dozens of people were killed by snipers, gunshots and tanks on the bridge, before the soldiers surrendered. The bridge has been renamed the July 15 Martyrs' Bridge to commemorate the civilians who lost their lives there.