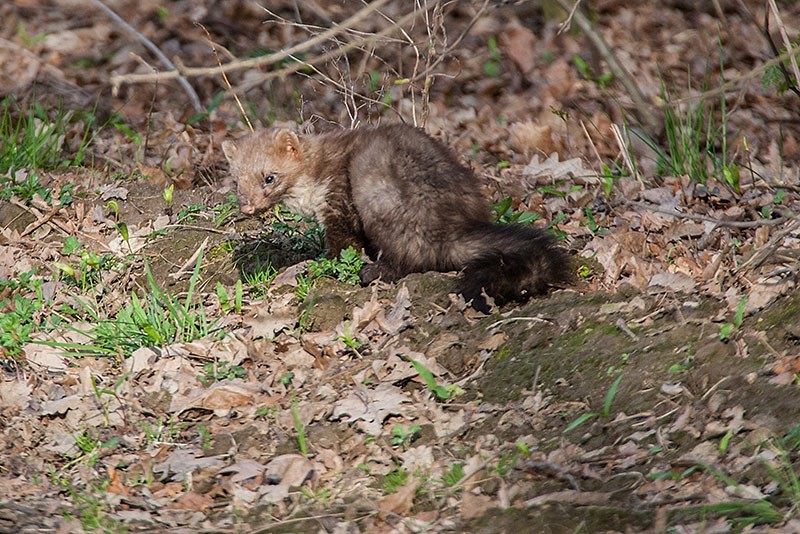 Joining the ranks of Turkey's famous street cats and dogs, martens have caused a social media stir as many Istanbulites have taken to the internet to report that they have seen the animals in backyards or on rooftops.

Istanbul's marten population has risen over the past several months, along with a surge in the population of hedgehogs, another animal one wouldn't necessarily expect to see strutting the city's streets.

Wild animal veterinarian and World Wildlife Fund (WWF) member Ahmet Emre Kütükçü stated that the species reported in Istanbul is the beech marten, which is also known as the stone marten, house marten or white-breasted marten.

Explaining that martens found in the city usually live in wooden buildings or on rooftops, Kütükçü said that the species feeds at night and that Istanbul was chock full of food sources like rats and pigeons, which are important elements of the marten diet.

"They are also fond of sweets. Sometimes they can break into houses if they find open windows. They also like eggs," Kütükçü said.

Noting that martens have adapted well to living in urban areas, Kütükçü said the majority of sightings came from the central European-side Fatih and Beyoğlu districts, which house numerous historic buildings and wooden structures. However, the construction of high-rise and concrete structures has pushed the animals to seek other areas to settle in, he added.

Istanbulites shared posts on social media, in which they commented on their experiences with the furry animals. One user said that there were martens living in schoolyard behind his house in the Cerrahpaşa neighborhood of Fatih, adding that the carnivorous creatures were eating food meant for stray cats.

Another user said one could suddenly come across martens as they popped out from under cars in Fındıkzade, also a Fatih neighborhood. Other users reported seeing martens in the Üsküdar district on the Asian side of Istanbul.

Martens are slender and agile predators, known for their thick fur and weighing in at about 1.5 kilograms. Native to coniferous and deciduous forests across the Northern Hemisphere, they belong to the mustelid family, which also includes otters, badgers, wolverines and weasels.
Last Update: Aug 17, 2017 4:43 pm
RELATED TOPICS