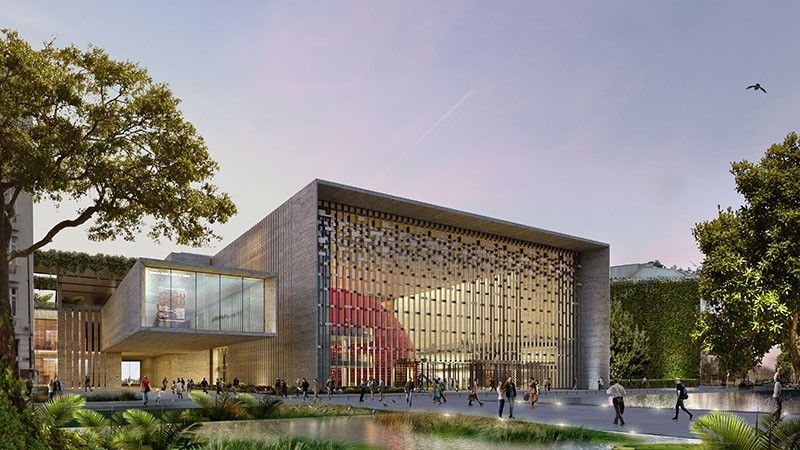 Istanbul will finally get a cultural landmark as the plan for a new cultural center to replace Taksim’s Atatürk Culture Center was unveiled Monday. The venue, set to open in 2019, will serve as an opera house and cultural events center

President Recep Tayyip Erdoğan joined dignitaries Monday to announce the plan to construct a new arts and culture venue overlooking Istanbul's iconic Taksim Square. The new building will replace Atatürk Culture Center, a relic of the 1970s, and will appeal to larger crowds, according to Erdoğan who has heavily campaigned for a makeover of the square at the heart of the city.

Though it will mainly serve as an opera house, the center will also have sections ranging from a cinema and theater to exhibition halls and is expected to be a major attraction for the city's locals and the thousands of tourists visiting from around the world.

Addressing the event to introduce the new project that is expected to be completed in 2019, President Erdoğan said the new venue would be a "dynamic" place. "This place will be a reflection of our modernization efforts. It is being built by Murat Tabanlıoğlu, son of Hayati Tabanlıoğlu, the man who designed Atatürk Culture Center. This indicates that we drew inspiration from the past for the future," he said.

Erdoğan added that the new center would not be limited to an "elitist" audience and will appeal to the wider public.

"It will be a symbolic place. A landmark we can take pride in for Istanbul and the country," he said. He also touched upon the opposition to the demolition of Atatürk Culture Center. "Scientific data shows that the current building cannot be sustained and that it is not earthquake-proof. We were supposed to carry out this project 10 years ago, but it was unfortunately delayed [due to opposition]," the president said.

The president, who is credited for the redevelopment of Istanbul in the late 1990s during his tenure as the city's mayor, said he would closely follow the construction.

The project is part of government's ambitions to transform Taksim Square. The municipality is working toward a complete pedestrianization of the place, which attracts hundreds of people daily. Erdoğan stated that vehicle traffic will be "diverted" to underground passes and the new landscaping will "enrich" the square.

The new culture center will have a 2,500-seat opera hall, almost doubling the capacity of the former hall. It will have concert halls, theaters, cinemas, libraries, design workshops as well as restaurants.

An 800-seat theater, 1,000-seat conference hall, 285-seat cinema and a 250-seat smaller theater are among the other features of the new center. Each new feature will have a separate entrance.

A new restaurant will open on the uppermost floor offering views of Istanbul's famous landmark-covered peninsula.

Culture and Tourism Minister Numan Kurtulmuş said one of the most important features of the building is that its architecture and all building materials will be indigenous.

Despite earlier projects and announcements suggesting a baroque structure to replace the minimalist building, the building's façade overlooking the square will be protected. The new project also includes new structures to be built over the parking lot located next to the old building designed with terraces, cafeterias and restaurants overlooking Taksim Square and the Bosporus.

The architect for the new project was announced as Murat Tabanlıoğlu, son of old AKM's architect Hayati Tabanlıoğlu.

The elder Tabanlıoğlu is famous for a number of designs, including Ataköy's waterfront area in Istanbul's Bakırköy district that also includes Turkey's first mall, Galleria, that opened in 1988 and was awarded the best design award by the International Council of Shopping Centers (ICSC) in 1989. Hayati Tabanlıoğlu also created the master plan for Turkey's first modern airport terminal building at Istanbul's Atatürk International Airport, which now serves as the domestic terminal. Tabanlıoğlu Architects has undertaken many renowned residence, office and public buildings and urban redevelopment projects since its establishment in 1990.

The AKM, located in the eastern end of Istanbul's main square, was initially designed in 1946 by architects Rüknettin Güney and Feridun Kip. Due to lack of funding and bureaucratic obstacles, construction was suspended and the Development Ministry took over the project in 1953. Construction resumed in 1956 with Tabanlıoğlu's project and finally completed in 1969.

The building sustained severe damage when a fire broke out during a play in 1970, destroying priceless items belonging to 17th century Ottoman Sultan Murad IV that were brought to the theater for a play.

The AKM was repaired in its original design in 1977 and reopened in 1978. It was registered as an "urban protected area" in 1993 and declared a protected cultural landmark in 1999.

In 2005, authorities announced that the building was "condemned" and needed to be demolished. However, a proposal by the then-culture minister was not approved. In 2008, the building was closed for repairs.

The main argument surrounding the building was whether the cultural center should be preserved as a landmark or rebuilt in its original design since it is regarded as a masterpiece of Turkish architecture by many. However, others have called the building ugly or cold due to its minimalist design that reflects its connections to the elitist policies of the early Republican era marked by one-party rule.

Five years later, the status of the center was among the causes of the protests in Gezi Park, located a few meters from the building, held in protest of larger redevelopment issues in Taksim Square, Gezi Park and İstiklal Avenue, but turned into nationwide anti-government riots.

During the riots, people used the building's exterior to hang banners for two weeks until Taksim was cleared of protesters. Afterward, riot police set up a police station there to suppress the months-long riots. The station is still located in the building.

Plans for a reconstruction were eventually scrapped due to a Turkish court decision. The tender for the reconstruction, which had been issued by the Culture Ministry, was halted in 2013.

Since 2008, Istanbul has lacked a proper concert hall to host operas and large orchestras. Due to AKM's inactivity, the State Opera and Ballet performs its plays at Süreyya Opera, originally a movie theater, located in Kadıköy district. The building, which belongs to Kadıköy Municipality, is seen as an inadequate facility for staging operas.