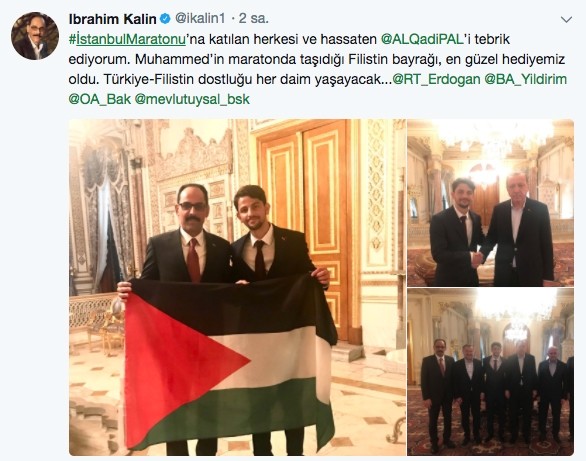 President Recep Tayyip Erdoğan met with a Palestinian athlete who participated in the Istanbul marathon Sunday upon Turkey's invitation after being denied entry to the U.S. for a race earlier in October.

Mohammad al-Qadi, who has run nine international marathons in the last 19 months, was recently not allowed to run the Oct. 8 Chicago Marathon after being denied entry to the country by U.S authorities.

İbrahim Kalın, an aide to President Recep Tayyip Erdoğan and presidential spokesperson, responded by issuing an invitation to Qadi to run the Istanbul Marathon on Nov. 12.

"Come and run in Turkey. Raise the Palestinian flag. Enjoy the beauty of the Turkish landscape. Be our guest," Kalın tweeted to the runner.

Qadi replied, thanking Kalın and saying he would run the marathon bearing the Palestinian and Turkish flags.

Following al-Qadi's meeting with Erdoğan at Yıldız Mabeyn Palace, Kalın tweeted a photo of the two, saying: "We will always cherish the Palestinian flag Mohammad carried proudly at the marathon. Turkish-Palestinian friendship will live forever."