Istanbul safer from Daesh with 1,447 suspects detained in 2017 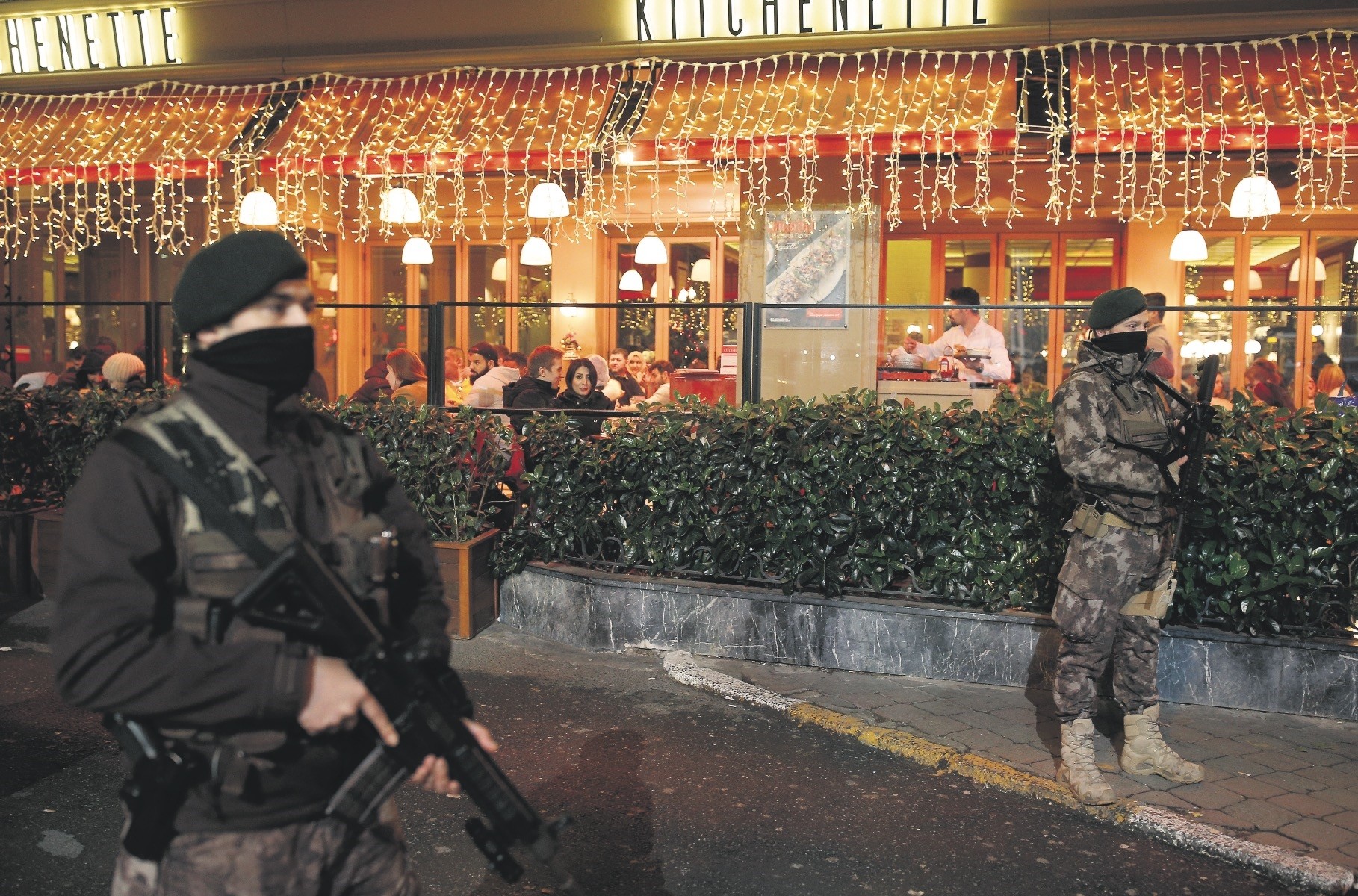 Special Operations police stand outside a restaurant at Istanbulu2019s Taksim Square during New Yearu2019s Eve. Security measures were stepped up across the city after a Daesh militant killed 39 people at a nightclub in the early hours of Jan. 1, 2017.
by Daily Sabah with AA Jan 03, 2018 12:00 am

Once posing a constant threat to millions, Daesh has not targeted Istanbul for 11 months last year thanks to a yearlong crackdown on the terrorist group that netted 1,447 suspects

The year 2017 started with a brutal attack in Istanbul at the hands of Daesh - a member of the terrorist group opened fire in a popular nightclub on the Bosporus shore, killing 39 people.

Nevertheless, authorities have managed to cap the year without any other attacks by the terrorist group thanks to a full year of operations. A total of 1,447 people, including foreigners, were arrested in Istanbul for their suspected links to the Daesh in 2017.

The Istanbul Police Department's Counterterrorism Unit has conducted 58 operations against Daesh throughout the past year. Police arrested 1,141 foreigners during the operations, while the intelligence service prevented many armed and bomb attacks.

The operations were not without incident. On Aug. 13, police detained 12 foreigners who were plotting a terror attack.

During an operation on March 16, anti-terror police raided a cell house in Istanbul's Kağıthane district and held Uzbek nationals, identified by their initials C.C. and I.D., who were preparing to carry out an attack similar to the one that targeted Reina nightclub on New Year's Eve.

On Oct. 28, four Daesh suspects, including two women, were arrested as they attempted to bomb a parking area in a shopping mall in the Bayrampaşa district of Istanbul. The arrest came a day before millions of Turks across the country celebrated the 94th anniversary of the proclamation of the Republic of Turkey.

The suspects were apprehended in the parking area of Forum Istanbul shopping mall, located in the European part of the city. Police seized 66 bombs, four suicide vests, two guns and a heap of ammunition.

Also on April 15, police arrested a total of 49 people, including 41 foreigners, who were plotting to carry out a terror attack before the referendum.

Turkish security forces have been involved in a long-running campaign to thwart Daesh attacks. More than 300 people have lost their lives in Daesh-claimed attacks in Turkey, where the terrorist group has targeted civilians in suicide bombings, and rocket-and-gun attacks.

The country's efforts against Daesh made it a primary target for the terrorist group, which has carried out numerous gun and bomb attacks targeting security forces and civilians.

This includes the country's deadliest terrorist attack, which killed 102 people and wounded 400 others in a twin suicide bombing at a peace rally in Ankara on Oct. 10, 2015.