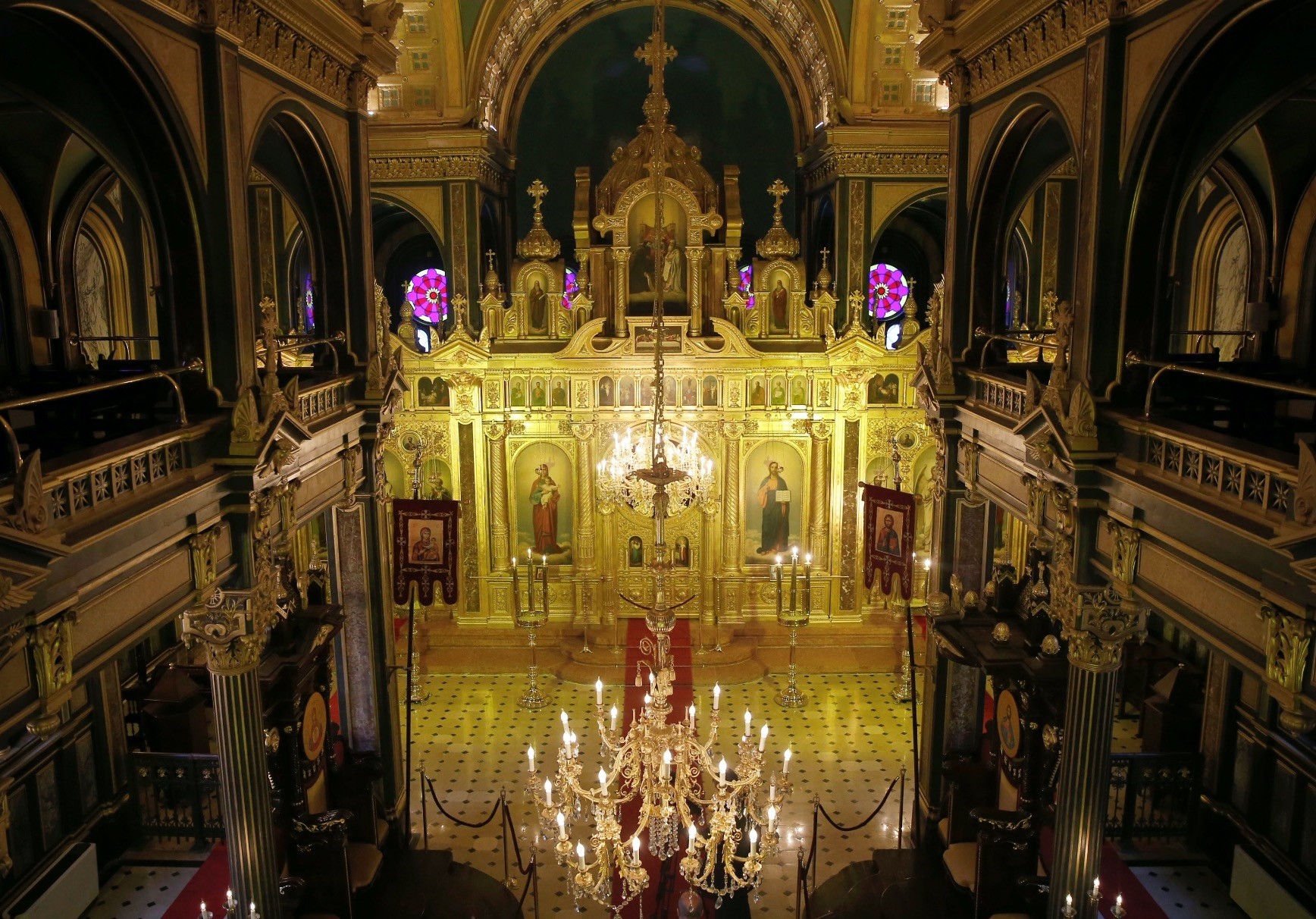 Built in the 19th century, Sveti Stefan is known for its intricate use of iron components and is known as u201cDemir Kiliseu201d or Iron Church in Turkish.
by Daily Sabah Jan 15, 2018 12:00 am

Istanbul's Sveti Stefan, or Iron Church as it is commonly known, drew hundreds of visitors a week after it was reopened by Turkish and Bulgarian leaders following major restoration

Istanbul's Bulgarian community may be one of the smallest of its kind but their splendid church on the Golden Horn shore made a splash after it was reopened last week in a ceremony. Since the opening of the church that underwent major restoration courtesy of Turkey, at least 2,000 people came to see Sveti Stefan Church, better known as Iron Church by locals due to its iron architecture. Though the community thinks they may not have Sunday services regularly as the congregation is small, the church is popular among weekend sightseers and tourists. Bulgarian tour operators also added the site to their itinerary, further driving up the visitor numbers.

Istanbul municipality and Bulgarian government had jointly completed the restoration project of the 19th century church, spending some TL 16 million. Sveti Stefan is branded as the only church mainly made of iron in the world, but it fell into a state of disrepair. Restoration started seven years ago.

Hristo Kopano, a board member of Bulgarian Orthodox Church foundation that oversees the church, told Anadolu Agency that they have a high number of visitors and expect more soon as more people hear about the place. "We had a successful restoration project here and the church shifted back to its original state," Kopano told Anadolu Agency (AA). Sveti Stefan is the largest church of the community whose number is small, so Kopano does not expect Sunday services every week but he adds that religious services in upcoming Easter and other holidays will be observed at the church.

Unlike other churches, Sveti Stefan is open to everyone between 09:00 a.m. and 17:00 p.m. "This is the house of God, anyone is welcome," Kopano says, noting that the church is also valued for its icons and decorations. The church's basement also hosts an art gallery where hundreds of photos show its state before and after the restoration.

Maria Tataru, a Romanian resident of Istanbul, says she came to see "a place saved from certain end" by restoration. "It really became beautiful. I believe more people will admire this beauty," she told AA.

İbrahim Zeytunlu, a church caretaker who had his wedding in 1994 officiated at the church before it was closed for repair, says the church will host weddings again soon. "People used to ask me all the time when it would be reopened during the restoration. We had an official opening but not all people may have heard it. Most visitors are those who saw the opening on the news," he says.

An outstanding symbol of Bulgarian Orthodox Christianity, the church was built in 1898 on the site of a wooden church destroyed in a fire. An Austrian contractor was hired for the construction and 500 tons of iron components were brought from Austria for the construction. The components were pieced together before it opened on Sept. 8, 1898. With three domes and rich exterior decoration, the church stands out among many other Orthodox churches in Istanbul. Six bells in the bell tower were brought from Yaroslavl, Russia, but only two have survived to the present day. The cross-shaped basilica has a ground floor, a basement, a gallery and a spire.

Turkey's Bulgarian community in Istanbul traces its history to the 18th century. Although Bulgarians were always present in the then-Ottoman Empire's capital, their number and settlement flourished in that century. It was Prince Stefan Bogoridi, an Ottoman statesman of Bulgarian origin, who spearheaded the efforts for construction of a Bulgarian church on the site of Sveti Stefan, on land he owned and donated to the church. Like other minorities, the number of Bulgarian community members dwindled in time, with many returning to Bulgaria or migrating to the U.S. and Europe.

Since the Justice and Development Party (AK Party) came to power in 2002, Turkey has sought to restore the rights of religious minorities as well as the houses of worship of minorities, including those of Assyrians, Jews and Greeks. Many properties have been returned to these minorities decades after they were forcefully confiscated by the Turkish state, while the government continues to pursue a policy of restoring abandoned historical buildings. In 2013, the Bulgarian Orthodox Church was returned a 59,000 square meter plot of land in central Istanbul that once belonged to the foundation that ran the church.