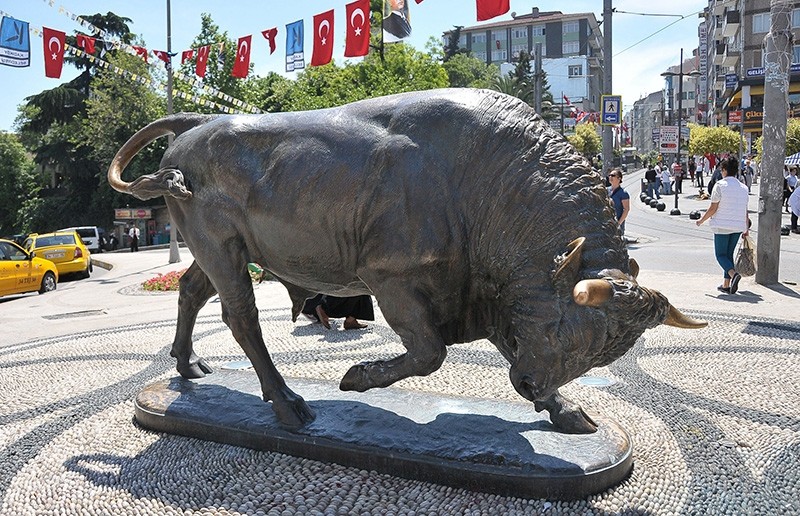 Following a decades-long and hard journey, a statue that has become a landmark of Istanbul's Kadıköy district over the last 20 years has finally earned its final resting spot.

The historic Bull Statue, located on the Altıyol Square of the busiest district of Istanbul's Asian side, was included in the master plan by an unanimous decision of the city council of Istanbul Metropolitan Municipality.

The statue, placed in its current spot in 1987, has quickly turned into a famous tourist attraction, selfie and celebration spot for Fenerbahçe fans.

However, its journey was a long one, and until today, it was not clear whether it will remain there despite its popularity.

The "Fighting Bull" statue was ordered by Ottoman Sultan Abdülaziz in 1864 and was built by French artist Rouillar in Paris.

However, a frequently cited online version of its story says that it was built by sculptor Isidore Bonheure in Alsace-Lorraine in 1864, and taken by Germans, who were the victors of the French-German war of 1870. The sculpture itself also bears the sign of Bonheure along with the date 1864.

The initial story suggests that the sculpture arrived in Istanbul in the early 1900s, was first displayed in front of one of the chalets of Yıldız Palace compound on the European side, and later transferred to Beylerbeyi Palace on the Asian side along with its sister bull statue, known as the "Stubborn Bull." Its earliest photograph taken in the Yıldız compound confirms this story.

The alternate story says it was a gift from Germans to the Ottomans, their World War I allies in 1917, specifically to Enver Pasha, the figure who led the empire into an alliance with German Empire.

After its arrival to Beylerbeyi, the fate of the statue became more traceable. Along with many other statues displayed in Ottoman palaces at the time, which were taken away by high ranking figures of the ruling Committee of Union and Progress (CUP), the Fighting Bull was first taken by Enver Pasha to be placed in a private farm in Belgrad Forests in the European side, then was returned to the yard of a high school in Kadıköy.

The statue then appeared in front of the then newly-inaugurated Lütfü Kırdar Congress and Exhibition Palace located in the Harbiye district of the European side in 1940s. For a brief period, it was taken to the entrance of a neighbor building, the Hilton Hotel, in the 1950s, but was returned to its old spot, Lütfü Kırdar, until 1970.

The bull made its final cross-Bosporus journey in 1971 as it was taken to be displayed in front of the old Kadıköy Municipality building, which currently serves as a library across the pier for Beşiktaş ferries.

This marked the beginning of the affection of locals in Kadıköy for the statue, which was later brought to its current spot in Altıyol in 1987.

In 2013, the National Palaces, which administers the old Ottoman palaces for the Grand National Assembly of Turkey (TBMM), demanded from the Kadıköy Municipality to return the statue to be displayed next to its sister statue in Beylerbeyi Palace, as part of a general effort to retrieve historic pieces missing in their inventories. However, the Kadıköy Municipality confronted the demand, saying that it had already become a landmark of the district.

The latest decision of the Istanbul Metropolitan Municipality confirms the final exhibition spot of the 154-year-old, tired, but still fighting statue.