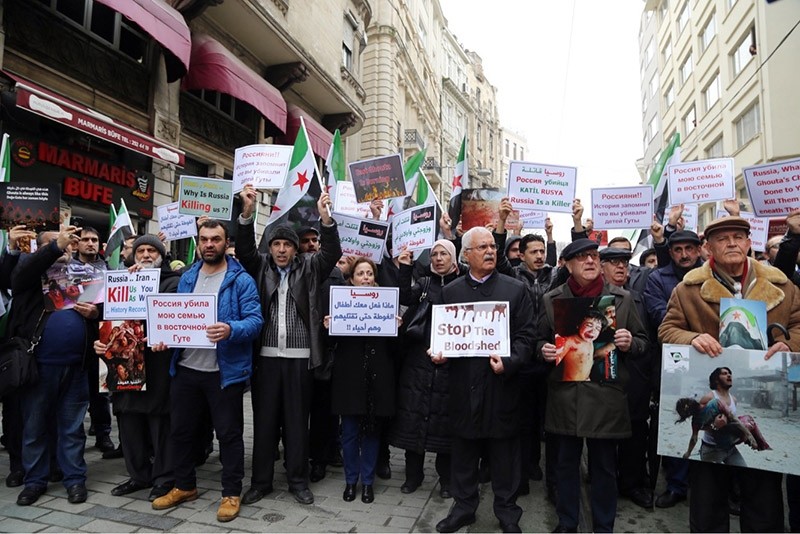 Over 200 people on Thursday protested outside the Russian consulate in Istanbul against the deadly assault on Syria's opposition-held enclave of eastern Ghouta.

More than 350 civilians have been killed in the five-day blitz by the Assad regime in the opposition-held enclave near Damascus.

Regime supporter Russia has been accused of taking part in air strikes but the Kremlin denied involvement, on Wednesday calling the accusations "groundless."

The demonstrators, most of them Syrians, chanted slogans against Damascus as well as Moscow and another regime supporter, Iran, an AFP correspondent said.

Others held placards saying "Russians, you are killing Ghouta's children, but history records" and "Children are dying of hunger in under-siege Eastern Ghouta."

Protesters called on the major powers to bring pressure to bear to "end the bloodbath."

Over three million Syrian refugees live in Turkey including nearly 540,000 in Istanbul after fleeing the conflict which began with anti-regime protests in 2011.

Now a multi-front war, Russia entered in September 2015, sending planes to back the Assad regime and turning the military situation around in Damascus's favor.

Turkey, which has supported the Syrian opposition in the conflict, has been working closely with Moscow and Tehran on a process to bring peace to Syria, despite occasional tensions.

Presidential spokesman Ibrahim Kalın on Wednesday said Turkey condemned the attacks and "urged the Syrian regime to immediately put an end" to them.

"It is a crime against humanity. That is to say, killing innocent people in East Ghouta is unacceptable whatever the reason is," Kalın said.