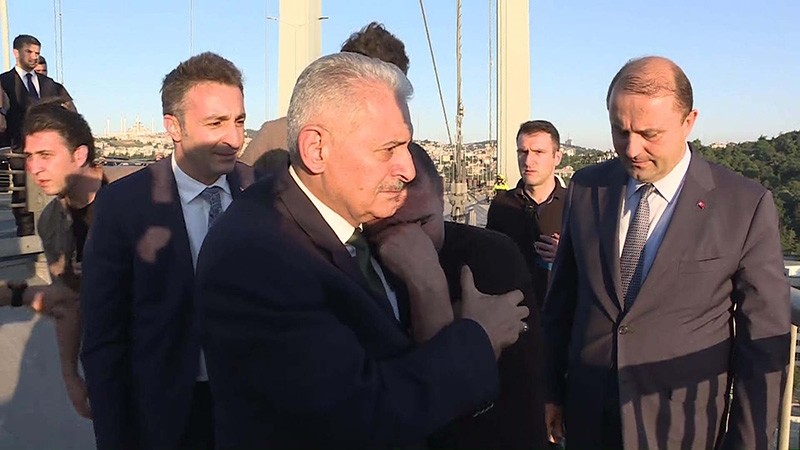 In a poignant encounter, Prime Minister Binali Yıldırım talked a man out of committing suicide Saturday evening on the July 15 Martyrs' Bridge in Istanbul.

According to information obtained, a Turkish man identified as T.T. had climbed over the guard rails on the July 15 Martyrs' Bridge when Yıldırım, on his way from Tuzla to the European side, was passing in his vehicle.


Seeing the commotion, Yıldırım got out of his car, crossed to the other side of the bridge and embraced the emotional man, who had been pulled to safety by authorities.

Yıldırım, who became visibly overwhelmed with emotion while holding onto the trembling man, offered him water. He told him "Come on, let's go together," and guided him to his vehicle.

Yıldırım and T.T. sat in the car together and talked for some time.

T.T., who is 40 years old, told Yıldırım he was having problems with his brothers and for that reason, wanted to end his life.

"Don't bring such a thing into your mind," Yıldırım comforted the man.

"We are Muslims, there is no reason which can compel us to end our lives. We all get overwhelmed from time to time. What we have to do in these situations is, take refuge in God and endure," he said.

"Every darkness has a light at the end, every narrow path has a refreshment at the end. We should never put out our hope in God Almighty. God has ordained the things you've come up against and accompanied them with sweet things. After this, everything will get better, don't worry," Yıldırım told him.

Yıldırım then brought T.T. along with him to the wedding ceremony of Culture and Tourism Minister Numan Kurtulmuş's daughter held at Haliç Congress Center.

Authorities learned that T.T. had come to the middle of the bridge by taxi, and was injured in the chest while attempting to jump. The prime minister's doctors performed initial medical intervention until an ambulance arrived to take T.T. to a hospital.

Yıldırım, who is Turkey's beloved last prime minister as the country transitions to an executive presidency, was nominated Saturday by his Justice and Development Party (AK Party) for the parliament speaker post.