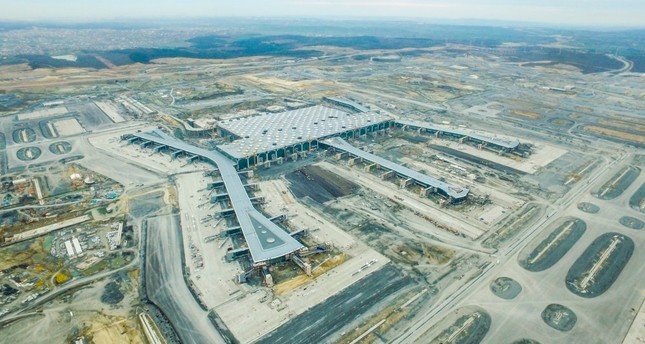 Istanbul's new airport is scheduled to open on Oct. 29.

National Geographic is in talks with Turkish Airlines (THY) to make a documentary on the historic relocation of Istanbul's aviation hub, Turkish media reported.

Istanbul New Airport, the third in the city, will replace Atatürk International Airport this October as the main flight hub in country's most populated city.

Uğur Cebeci, an aviation columnist for Hürriyet newspaper wrote yesterday that the National Geographic was in touch with THY officials to cover the massive relocation process that is expected to take 48 hours.

It will be inaugurated on Oct. 29, the Republic Day, and transfer of major flight operations from Atatürk to the new airport is expected to take place within 48 hours after the inauguration ceremony.

THY plans to not to fly for at least the first 18 hours of the transition that will see 5,000 trucks carrying equipment heading to the new airport from Atatürk, which will be used for small-scale aviation operations once the transition is completed. The airport, one of the mega projects of the ruling Justice and Development Party (AK Party) to raise Turkey's profile and boosts the economy, will accommodate 3,500 take-offs and landings per day. The airport will have some 100,000 square meters of living space, a 25,000-capacity parking area, 143 boarding bridges, a 42-kilometer baggage handling system and cargo capacity for 5.5 million tons. It is expected to generate more than $15 billion in revenue for the Turkish economy and create more than 225,000 jobs.

Share on Facebook Share on Twitter
Previous in Istanbul The six minarets of the Çamlıca Mosque, situated on the Çamlıca Hill... Next in Istanbul More than 6,000 people visited the Fourth International Arabic Book...
DAILY SABAH RECOMMENDS