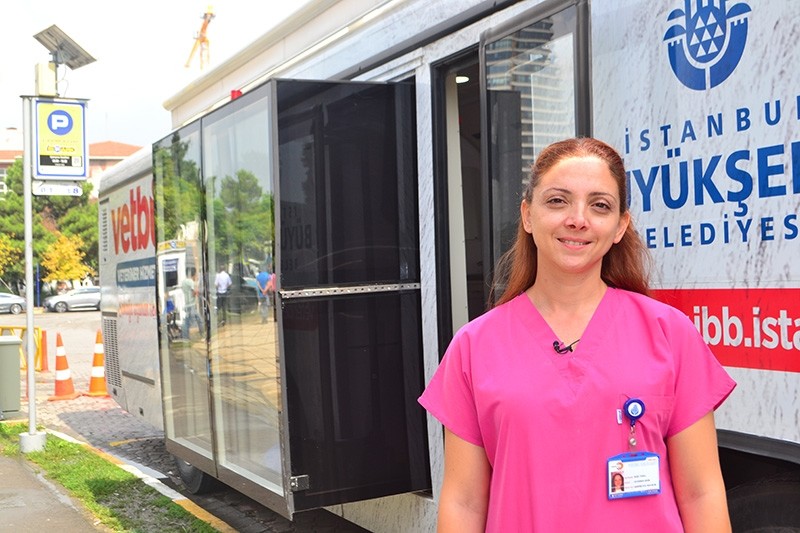 In the past two months, 280 street animals in Istanbul have received treatment from a team of veterinarians, surgeons and technicians, thanks to Istanbul Metropolitan Municipality (IBB)'s new project to boost care and treatment of stray animals in all 39 districts through mobile veterinary clinics.

The project named "Vetbus" currently consists of two buses converted to clinics. One of the buses operates on the European side in Istanbul and the other on the Asian side, both providing health screening, immunizations, parasite treatments and microchipping.

Neşe Toker, a veterinarian at IBB's Directorate of Veterinary Services, told Anadolu Agency that the buses will be going to different districts every day for health screenings for as many stray animals as possible.

"As part of the Vetbus project we do health screening, immunizations, internal and external parasite treatments and microchip applications. If the animal doesn't have a serious illness, we provide outpatient care," she said.

For animals that are very badly hurt or unwell, Vetbuses also provides transfers to IBB treatment centers for extensive care.

The service also allows for citizens to bring their pets to the mobile clinics for any treatment that may be required which is taken care of by the veterinarian on duty.

The "Alo 153" help line also takes inquiries from citizens as part of the Vetbüs project.

Toker stated that the service aims to reach many more stray animals and provide necessary treatment.

Turkish cities, Istanbul in particular, are known as stray animal heavens, especially for cats, due to the harmonious relationship between locals and the animals.

However, many of the stray animals also suffer from diseases, malnutrition and extreme weather conditions. Incidents of animal cruelty and abuse are also common.

Last year, municipalities across the country were allocated an additional 11.5 million Turkish liras ($3.3 million) by the government for the rehabilitation of stray animals.

The funds, doubled compared to 2016's allocation, were to be used for the spaying of animals, electronic tagging and the construction of shelters for stray animals. According to the Minister of Forestry and Water Affairs Veysel Eroğlu, the government provided more than TL 22 million to 45 municipalities for the care of animals between 2009 and 2016.