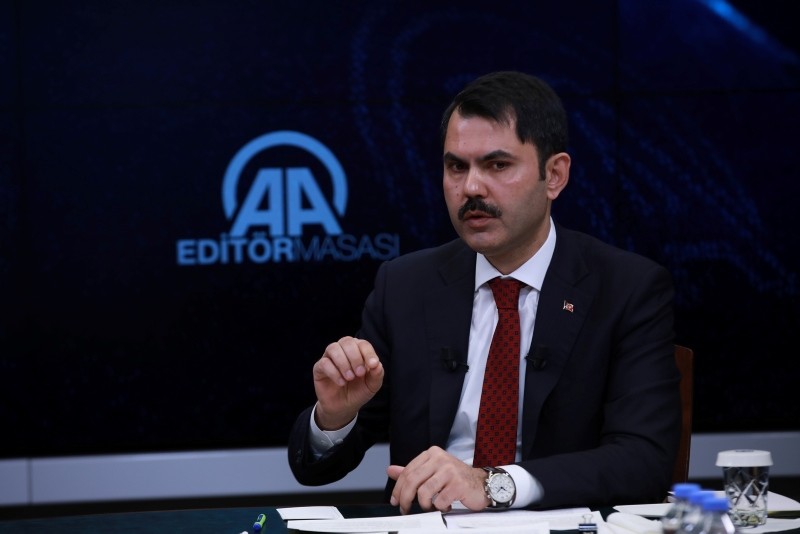 Five large new city parks will be opened in Istanbul this weekend, Environment and Urbanism Minister Murat Kurum said Wednesday, adding that the megacity will gain 1.5 square kilometers of green space at an instant.

The new city parks, referred to as "millet bahçesi" (translated as public garden) by the government, look to create a vast expanse of greenery in the middle of rapidly developing cities. They will act like an oasis in the concrete jungle that is Istanbul, whose skyline nowadays is increasingly dominated by construction cranes, rather than trees and minarets. The parks will offer a quicker access to nature for urbanites compared to the city's forests, which have moved farther away with a shift in populated areas.

Newly-developing Başakşehir district on the European side of the city will house three parks in Başakşehir, Kayaşehir and Hoşdere neighborhoods, while the two others will be located in the historic Baruthane (Ottoman-era gunpowder factory) complex in Bakırköy district and Çırpıcı neighborhood of Zeytinburnu district.

Speaking about the ongoing urban transformation drive launched to renew poor-quality buildings, Kurum also said that as of today, some 5 to 5.5 million buildings throughout Turkey should be renewed and this number will reach 7.5 million in 2025.

The minister stressed that 66 percent of Turkey's territory and 71 percent of its population lives in top-risk first and second grade earthquake zones, saying: "Therefore we need to transform these buildings as soon as possible. This is an inevitable truth."

Kurum noted that 550,000 buildings have been renewed since 2012, when the law on urban transformation was issued.

He said that high-rises will not be considered anymore for urban transformation projects and construction area increase will not exceed 20 to 25 percent, if there is to be increase.

Kurum also said that nearly 8.6 million citizens have applied for the construction amnesty practice first launched in June, and the ministry expects 14 to 15 million people to apply before its end.

The practice aims to give legal status to unauthorized buildings or additions by partially charging fees to be paid to authorities, while bringing these buildings under the scope of urban transformation projects.

The park in Başakşehir, which covers over 360,000 square meters, is located next to the district's central square. It will house a large parking lot, an 11,740 square meter reservoir, gardens with 80,000 plants of 34 different species and 4,700 trees. It will also feature a 6-kilometer walking and bicycle lane, as well as playgrounds and sports grounds.

It will also host a "millet kıraathanesi," a new type of reading cafe championed by the government. These cafes are open round the clock and offer a place to read books, drink tea for free and socialize with people of all ages.

The Kayaşehir Park covers 350,000 square meters and offers facilities similar to the park in Başakşehir. In addition, it will be home to a viewing terrace.

The park in Hoşdere is built on an area of 142,000 square meters. It will house fruit orchards, picnic grounds and a basketball court.

The park in Baruthane will have the restored Ottoman-era factory at its heart and cover an area of 59,719 square meters.