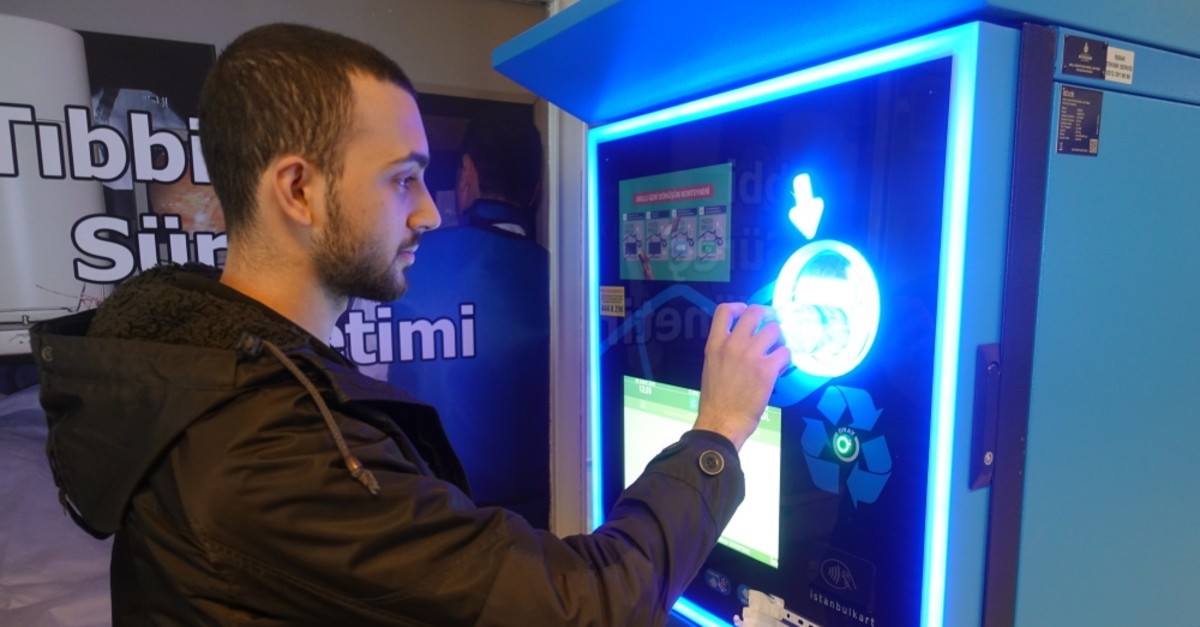 Only months after being launched in Istanbul, vending machines giving free bus tickets in exchange for plastic waste have led to the collection of hundreds of thousands of plastic bottles, reduced carbon emissions and saved fuel

Turkey's most populated city, Istanbul, introduced a unique project to keep it clean in September 2018. Reverse vending machines giving bus tickets in exchange for plastic bottles have led to the collection of 785,084 bottles and aluminum cans for recycling. Commuters have installed more than TL 34,000 on their commuter Istanbul Cards, the electronic card used for mass transit in the city.

Currently, the city hosts 96 reverse vending machines; the majority of them are at schools. Three are placed in metro stations, while two others were deployed in public hospitals. In exchange for plastic bottles and aluminum waste, people can get fare credits on their electronic passes. The more they deposit in a machine, the more credits they can get.

Smart Mobile Waste Transfer Machines, as they are called by the municipality, are to be installed in 25 locations and more will be added in the coming months. The machines feature an electronic interface that is able to recognize and sort discarded waste and crush, shred and store it.

Municipal officials say more than 18,000 people have used the machines since Sept. 18, 2018 and dumped 682,179 plastic bottles and 102,905 aluminum cans. In total, the waste weighs more than 15,000 kilograms. This equals 41 tons of carbon emissions and 12,000 liters of fuel, as well as 130,000 megawatts per hour of electricity. The municipality plans to collect as many as 2 million bottles and cans in the first year. In particular, schools were chosen as main locations to raise awareness among children about recycling. The project was honored with an award by the Ministry of Environment and Urban Planning last year.

It is a big step toward increasing awareness of recycling, which remains low in Istanbul and in Turkey in general.

Istanbul, home to nearly 15 million people, produces an average of 17,000 tons of domestic waste every day, of which 6,000 tons are processed in the municipality's garbage collection and recycling centers. One recycled plastic bottle produces enough energy to power a 60-watt light bulb for a few hours.

Turkey, under the patronage of first lady Emine Erdoğan, launched the "zero waste" initiative in 2017 to curb waste. It concentrates on collection of waste separately, collection of food leftovers for delivering to animal shelters, conversion of food waste to compost and a nationwide awareness campaign. Started at the presidential complex, it has progressed as more people, more public institutions, private companies and municipalities joined the effort to recycle and sort waste. The campaign helped Turkey rediscover its potential to be a more eco-friendly country, despite heavy industrialization in recent years. The ensuing recycling drive saw zero waste collection areas set up in more places, from shopping malls to businesses, schools, hotels, airports, etc. The drive saved more than 30 million trees in 2017 and 2018, recycling more than 1.7 million tons of paper waste and cartons.

In recent years, the country has started to prioritize waste management over concerns about rising environmental damage, with municipalities responsible for garbage collection and upgrading their waste management systems. Under a new draft bill, every business or public institution will be required to receive a zero waste certificate that evaluates how they have complied with the new policies. The bill also makes it mandatory for municipalities to set up facilities for collection of waste separated at its source.