Seen as the backbone connection that will join the transportation systems of Istanbul and provide significant relief to traffic, the 63-kilometer link in the 76.6-kilometer Gebze-Halkalı railway has officially opened

Turkey's most populous city, Istanbul, has witnessed the completion of the long-awaited Marmaray project. Revamping the existing suburban railway line with a tunnel connecting the sections separated by the Bosporus, all sections of the project finally came into service on Tuesday.

The line, operated by the Turkish State Railways (TCDD), was opened in a ceremony in the Kartal district on the Asian side of Istanbul. President Recep Tayyip Erdoğan took the driver's seat on the first official train departing from Kartal station. Former Parliament Speaker and Prime Minister Binali Yıldırım, the ruling Justice and Development Party's (AK Party) mayoral candidate for Istanbul in the upcoming March 31 local elections who served as transport minister for 14 years, accompanied Erdoğan, along with Transport and Communication Minister Cahit Turhan and his predecessor Ahmet Arslan.

"This line, which is the busiest and most heavily-trafficked route in Istanbul, will carry 75,000 passengers an hour and 1.7 million passengers per day. In other words, this suburban rail line will carry passengers that would normally require 100,000 vehicles," Erdoğan said.

Saying that they have brought Istanbul to a whole new level not only in transportation but also drinking water, air quality, the cleaning of the Golden Horn, zoning and green spaces, Erdoğan said: "Thank God, our efforts are being repaid by making Istanbul the most popular city on earth. This is the reason why Istanbul was visited by as many tourists as its population [15 million] last year, although this number is far below Istanbul's potential. We are determined to bring Istanbul from eighth place among the most visited cities in the world to the top spots."

The president noted that Istanbul's 10 districts would be able to use this line, which will greatly reduce congestion on the bridges crossing the Bosporus and the historic peninsula area. 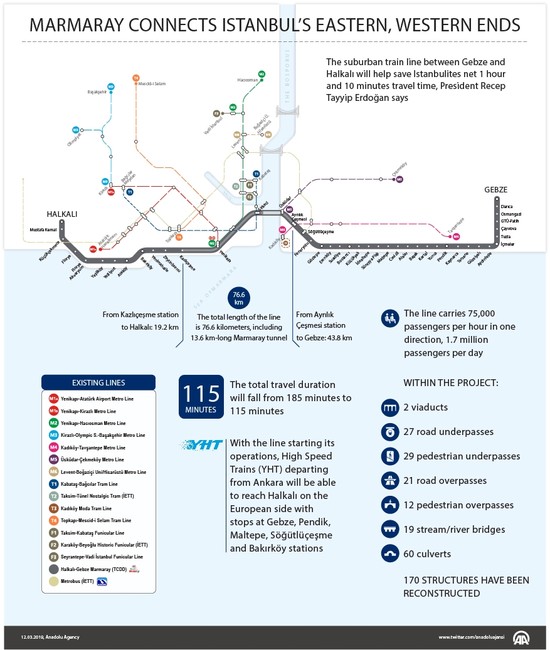 With regular service covering 43 stations, it takes 115 minutes (1 hour 55 minutes) for a train departing from northwestern Kocaeli's Gebze district neighboring Istanbul, the eastern terminus of the Marmaray, to reach Halkalı, the western terminus of the line located in the Küçükçekmece district on the European side. The previous route took nearly 3 hours, including crossing the Bosporus with a ferry between the Asian terminus Haydarpaşa and the European terminus Sirkeci.

The 76.6-kilometer Gebze-Halkalı railway line includes the 13.6-kilometer Marmaray, an intercontinental subway that connects the Asian and European sides of the city through a submerged tunnel under the Bosporus. Marmaray has been serving two stations on the Asian side and three on the European side since 2013.

Erdoğan voiced pride that 300 out of the 440 vehicles that will operate on the line were manufactured in Turkey. He noted that to date, around 1.4 billion euros ($1.58 billion) was spent for the line.

Together with the 63-kilometer line, Istanbul's 170-kilometer rail system has been increased to 223 kilometers. Erdoğan noted that they aim to increase this figure to 500 kilometers in the first phase and to 1,100 kilometers later on.

Another feature of the line is that it constitutes the Istanbul leg of the Iron Silk Road that will extend from London to Beijing, Erdoğan said, adding that trains that depart London will use the line to Beijing.

He also noted that high-speed trains will no longer use Pendik as the last stop, but they will continue until Halkalı.

Following the opening ceremony, President Erdoğan continued his rallies for the local elections in Küçükçekmece, Avcılar, Beylikdüzü and Büyükçekmece. In Küçükçekmece, Erdoğan said that through the railway project, not only would the two sides of Istanbul have been connected, but also the two continents, Asia and Europe.

"We will continue to hail both Küçükçekmece and Istanbul following the elections," the president added.

Meanwhile, in his statement earlier this week, Minister Turhan said that 63 kilometers of double lines and existing stations, consisting of the 43.8-kilometer link from Ayrılık Çeşmesi to Gebze on the Asian side and the 19.2-kilometer line from Kazlıçeşme to Halkalı on the European side, have been removed. All the infrastructure and stations have been rebuilt as part of the project that will reduce the travel time between the two lines to 115 minutes from 185 minutes.

"All the infrastructure and stations have been rebuilt to allow three lines on the same route. Marmaray trains will use two lines in the north from among the three new lines to be built. The suburban operation could be actualized at the subway standard at two-minute intervals. The third line in the south will be used by intercity passenger and freight trains and high-speed trains. Ten units of siding have been constructed to ensure the two-way high-speed train operation on this line," Turhan said.

Noting that 38 new stations, 27 on the Asian side and 11 on the European side, have been built, Turhan noted that seven of them (Gebze, Pendik, Maltepe, Bostancı, Söğütlüçeşme, Bakırköy and Halkalı) would be intercity train-suburban train transfer stations.

According to Turhan, as part of the project, which will start passenger transportation this year, the Gebze-Halkalı high-speed train line will be ready and put into operation along with the Ankara-Istanbul high-speed train line. Thus, a high-speed train departing from Ankara will reach Istanbul and be able to stop in Gebze, Pendik, Maltepe, Bostancı, Söğütlüçeşme, Bakırköy and Halkalı.