The Grand Çamlıca Mosque, the biggest of its kind in Turkey and a new landmark in Istanbul, officially opened on Friday with President Recep Tayyip Erdoğan in attendance

Ali Erbaş, Turkey's top religious figure who is the head of the Presidency of Religious Affairs, led the prayers and delivered a sermon on the occasion. A large number of foreign guests who were later scheduled to hold a meeting with Erdoğan were among those attending.

Speaking at the ceremony, Erdoğan used the occasion to condemn attacks on religious institutions across the world, underscoring that attacks on places of worship stemmed from the same "dark source".

"Attacks in the name of religion on places of worship or innocent civilians constitute terrorism, not jihad," said Erdoğan, urging all to reject the brutal and primitive mentality that turns houses of worship into "a bloodbath".

"Those who attack mosques or those who target churches share the same dark mentality, they're all common enemies of humanity," he said.

The president also reiterated his determination "to clear the nation and region of Daesh, PKK, FETÖ, Al Qaeda terrorists". 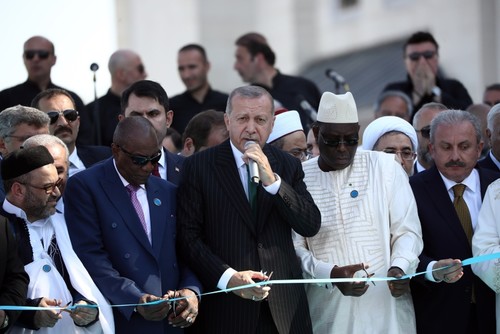 The mosque originally opened for prayers in March during the Islamic holy night of Laylat al-Ragha'ip, six years after its foundation was laid, but was still undergoing construction. A successor to grand Ottoman-era mosques dotting Istanbul like the famed Blue Mosque and Süleymaniye, Grand Çamlıca Mosque offers a view of other grand mosques with its location on the eponymous hill on Istanbul's Asian side. The mosque incorporates old and new in its architecture although its exterior is designed in the tradition of old mosques in Turkey. Traces of decoration and building styles from the Ottoman era and pre-Ottoman Seljuk architecture adorn the mosque's interior and exterior.

It is also full of veiled symbolism that the public can only learn from its designers, like six minarets representing the six articles of the faith. Four of its minarets are exactly 107.1 meters tall in a tribute to the 1071 Malazgirt (Manzikert) victory of the Seljuks against the Byzantine army that cemented Muslim rule in Anatolia. Its 72-meter high main dome represents what builders say are the 72 nations that lived in the city. The secondary dome has a diameter of 34 meters after the license plate number for the city. The interior of the dome is inscribed with 16 adjectives attributed to Allah, and it also symbolizes the number of states founded by Turks in history. Atop the main dome is a three-piece finial that weighs 4.5 tons, and at a height of 7.77 meters, the largest of its kind.

The mosque also has one of the largest temple entrances in the world: A 5-meter-wide, 6.5-meter-high door weighing 6 tons. Before that, an enormous marble arch marks the entrance to the courtyard with verses from the Quran inscribed on it. The main door also contains verses from the al-Imran surah or chapter of the Quran. Inside, a 9,000-piece, 220-meter-long horizontal plate placed under the dome contains the al-Fath surah in its entirety.

Additionally, it is more than a mosque, with additional facilities, such as an 11,000-square-meter museum, a 3,500-square-meter art gallery, eight workshops for artists, a library, a conference hall with a capacity of 1,000 people and a large parking lot that can hold 3,500 vehicles.

It is situated in the middle of a 90-acre piece of land covered with greenery specifically to make it closer to nature, unlike other mosques in the city that are stuck amid the concrete jungle. A short walk from the mosque gives visitors a magnificent view of the Bosporus on the outskirts of Çamlıca Hill.

The association behind the mosque's construction, which consists of several donors, picked the mosque's design from 62 candidates and was ultimately inspired by the works of Sinan the Architect, a legendary Ottoman-era architect credited with beautiful mosques in Istanbul and other cities. The museum and art gallery are among the highlights of the mosque, separating it from its modern counterparts. The museum will host a number of artifacts and function in part as a venue run by the Topkapı Palace Museum.

The mosque's interior has a capacity of hosting 25,000 people but in total, 63,000 people can pray at the same time with the inclusion of the spacious courtyard.