Long hours of traffic for drivers on road for Ramadan Bayram 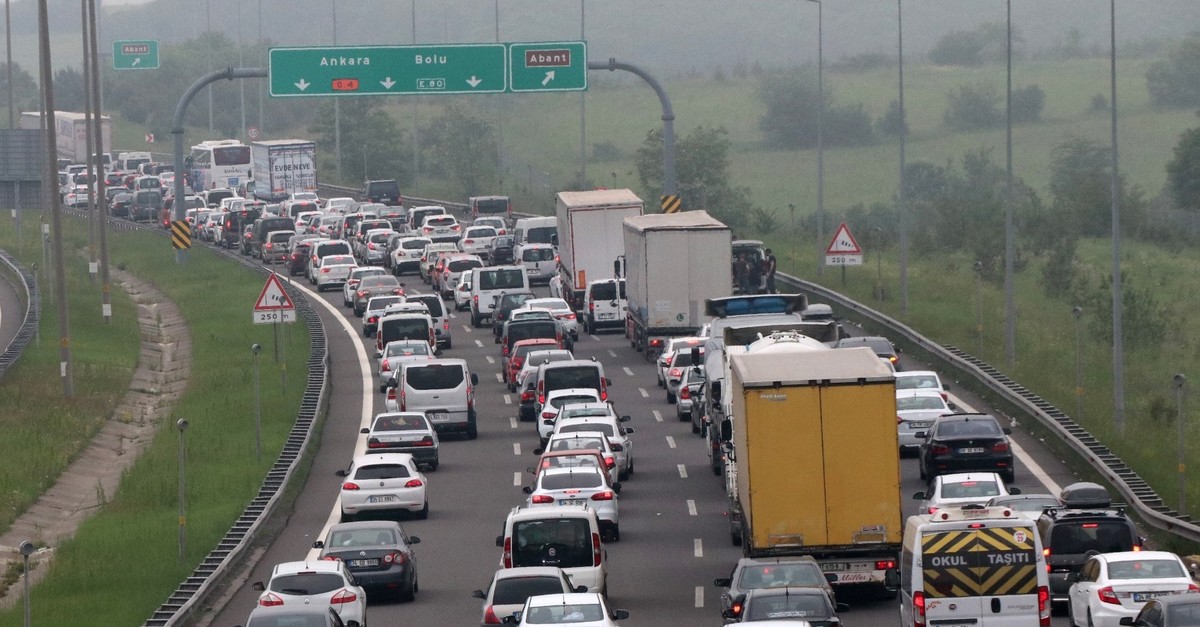 Flocking to tourist areas or their hometowns, thousands got on the road to leave Istanbul, causing kilometers-long traffic jams.
by daily sabah Jun 03, 2019 12:04 am

Drivers hitting the road for the nine-day holiday, were faced with long lines due to backed-up traffic, especially at Istanbul's exit points and the surrounding areas. Those who chose to spend the holiday in Istanbul, on the other hand, woke up to empty streets with almost no traffic

Istanbulities, who hit the road to spend the 9-day Ramadan Bayram outside the city, have caused congestion in the Kocaeli section of the D-100 highway and the Anatolian Motorway. In Derince and İzmit, traffic was backed up for about 10 kilometers.

The density has been continuing non-stop in the Bolu section of the Anatolian Motorway since Friday, the beginning of the nine-day holiday. Traffic sometimes came to a standstill, especially in the Bolu Mountain Tunnel, Abant Junction, Yumrukaya, Köroğlu service area and Gerede Black Sea sections of the motorway.

Traffic, gendarmerie and road teams of the Bolu Provincial Directorate of Security have been working tirelessly to ensure that the road is not closed. Expecting the density to continue throughout the day, crews have been asking drivers to comply with traffic rules and avoid driving while they are sleepless and tired. In Istanbul, one of the most famous cities in the world in terms of traffic density, there was a notable decrease in in-city traffic after the holidaymakers left the city.

Transport and Infrastructure Minister Cahit Turhan said Friday that during the Ramadan Bayram, except for those constructed with the build-operate-transfer model, bridges operated by the General Directorate of Highways (KGM) would be free of charge, noting public transport would also be available free of charge in many cities including Istanbul during the holiday. Meanwhile, Interior Minister Süleyman Soylu said seven people were killed in the traffic accidents on the first day of the holiday, a 62% decrease compared to last year. "Do not compensate for your slow travel due to traffic jams by stepping on the gas after the traffic congestion is relieved," he added.

Soylu met with neighborhood mukhtars at a restaurant in Esenler. Elaborating on traffic density during the holiday right before the meeting, Minister Soylu stressed that the death toll on the first day of Ramadan Bayram decreased by 62% compared to the last 10 years.

"While we are happy and excited during the holidays, we also feel worried, anxious and sad due to the traffic," Minister Soylu said. "We also took very inclusive measures for this holiday. About 185,000 traffic officers will be on the road. Every day, 9,000 teams are on duty. Our traffic teams are positioned every 10 kilometer in the accident points we determined."

Stressing that they aimed to reduce the number of accidents, to zero if possible, with no loss of life, Soylu advised citizens to make their travel plans before they start their vacation to prevent the accidents, noting that the holiday starts from the moment they get in the car.

Minister Soylu also urged citizens to get some rest if they felt tired regardless of the remaining distance, recalling that the holiday was 11 days in 2011 and 2016 and again 10 days last year.

"According to the first-day figures, we lost 18 people on the first day of the Ramadan Bayram last year. The 10-year average is 20 people. We have lost seven people so far, which points to a 62% decrease," Soylu said, reminding citizens to be careful.

"Do not compensate for your slow travel due to traffic jams by stepping on the gas after the traffic congestion is gone," he continued. "If you feel tired, even when there are only five kilometers left, it is essential to get some rest. Otherwise, you might pave the way for a huge accident," he added.

Deputy Minister of Interior Tayyip Sabri Erdil, on the other hand, said that between May 31 and June 10, 101,000 traffic crews and 180,000 traffic personnel would be on the road. "Inspections, follow-ups, and checks will be maintained on the roads. Our goal here is to reduce the number of traffic accidents," he said, pointing out that approximately 9,200 teams and more than 18,000 traffic personnel conducted daily controls and inspections during the holidays.

Having made on-site examinations at police and gendarmerie traffic checkpoints, Erdil chatted with drivers and passengers and gave the children a red whistle.

Erdil also recalled that they declared 2019 as the year of the fight against traffic accidents and carried out seven to eight separate projects in this regard.