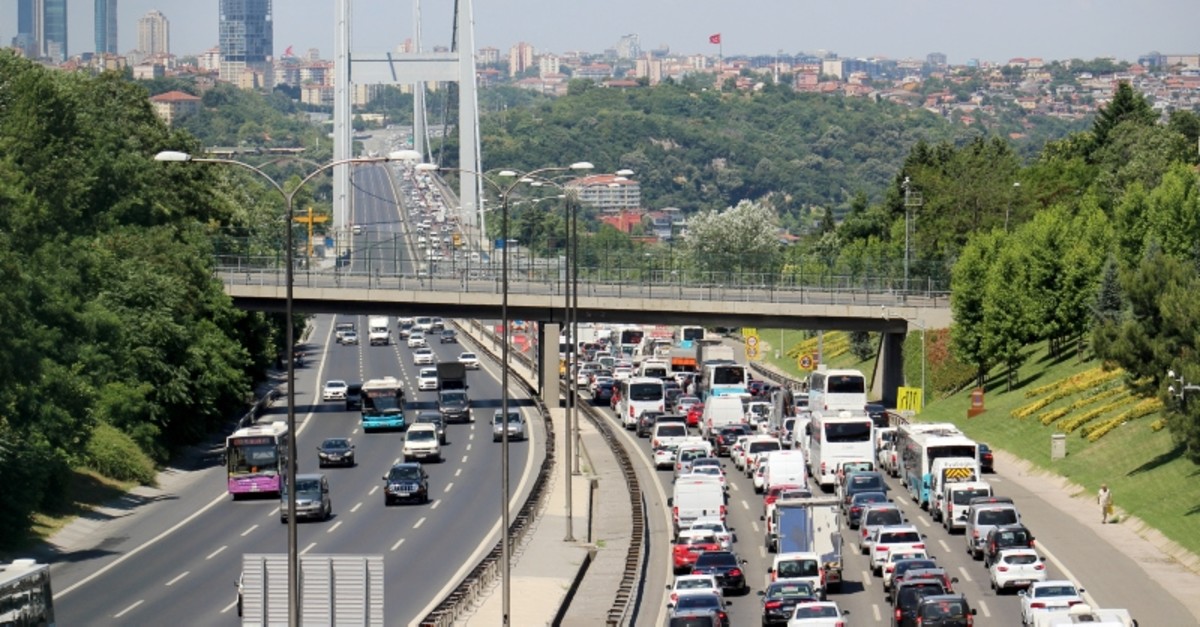 Driving in morning rush hour is already a stretch for Istanbul commuters, but the partial closure of the Fatih Sultan Mehmet (FSM) Bridge for reparation adds to the woes of thousands of people now. Starting Thursday, the bridge connecting Istanbul's Asian and European sides was partially closed for 52 days.

Four lanes – two in each direction – that relieve the traffic flow were shut down as crews started maintenance of the lanes and poured new asphalt. Motorists had only two lanes for crossing on each side, and some decided to take the July 15 Martyrs Bridge, another of three bridges connecting the two sides, immediately creating another traffic jam in the early hours Thursday. As of 8:30 a.m., traffic reached to 49%, doubling and at time, quadrupling travel times, in scorching heat.

Istanbul governorship on Monday originally said July 15 Martyrs Bridge would undergo maintenance too, but the General Directorate of Highways on Thursday said repairs would only take place on the FSM Bridge.

This might be only the beginning of further troubles for motorists as authorities announced the July 15 Martyrs Bridge will also be closed in the coming days for maintenance, though no date is fixed yet. It will likely start and end before the beginning of the new school year on Sept. 9, the day thousands of school buses hit the roads.

Authorities say regular maintenance is required to provide safe, comfortable and long-term service on the bridges, which are the main routes of Istanbul transportation across the Bosporus.

Lane closures for maintenance on Istanbul's main bridges have created massive traffic jams in the past. In July 2012, when five lanes of the FSM Bridge were closed for maintenance, traffic around the bridge came to a halt, trapping thousands of drivers for hours in the sweltering kilometers-long standstill. With the then-crippled bridge acting as a bottleneck, the long lines extended to highways, leading to citywide traffic jams and prompting Istanbul drivers to protest.

Apart from the July 15 Martyrs Bridge, drivers are provided with the alternate route of the Yavuz Sultan Selim Bridge, also known as the third bridge, to the north and the Eurasia Tunnel to the south but both are toll roads.

The bridge, which stands about 5 kilometers north of the July 15 Martyrs Bridge, connects the Hisarüstü district on the European side with the Kavacık district on the Asian side.