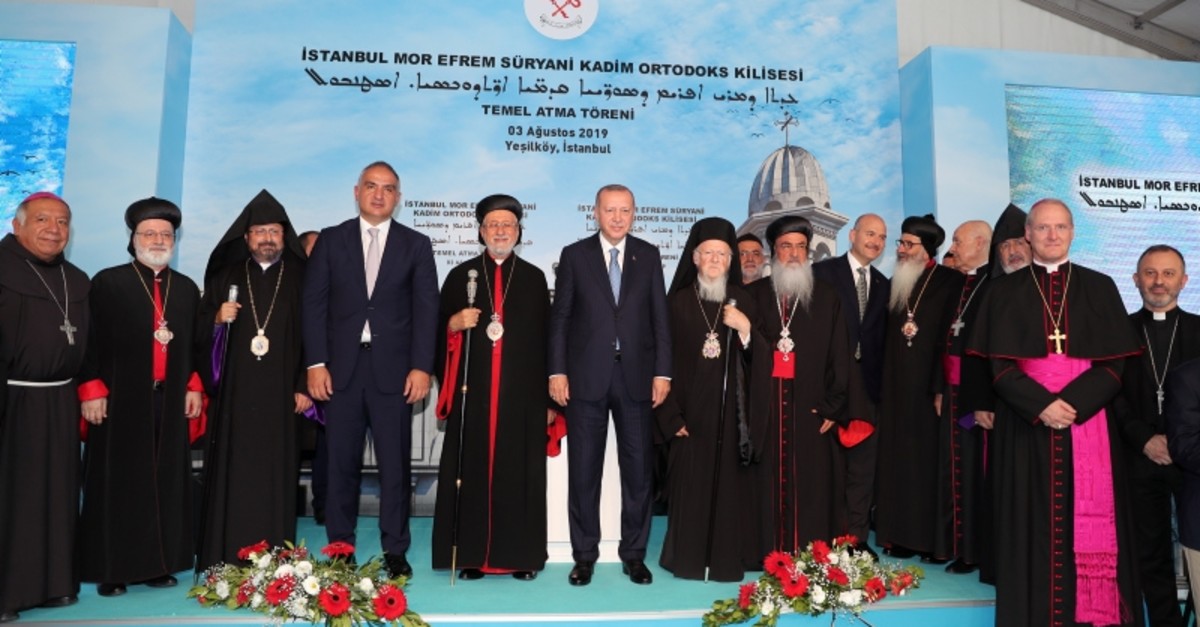 The construction of Istanbul's new Syriac Orthodox church will be completed in two years, President Recep Tayyip Erdoğan said at the foundation-laying ceremony on Saturday.

"I see Mor Ephrem (Saint Ephraim) Syriac Church as a new richness for Istanbul," the president said in the city's Yeşilköy district on the European side.

Erdoğan highlighted that Turkey's door has been open to all people oppressed people, from Spain to Northern Africa. "Turkey hosts nearly four million Arabs, Kurds, Turkmens; Muslims, Assyrians, Ezidis, other groups from Syria, Iraq," Erdoğan said. He continued by saying that there is no place in the hearts or minds of the Turkish people for discrimination and there never will be.

"Like all their other issues, meeting the worship needs of the Assyrian community, the ancient children of our geography, is the duty of the state of the Republic of Turkey," Erdoğan said.

"We are a nation which has been ruling over this region for almost a millennium, and Istanbul for 566 years. Throughout this long history, our region has always been the heart of religious, ethnic, and cultural diversity, and most importantly of the conscience of humanity," he added.

"Although suffering in our region over the last 150 years has caused many troubles and much destruction, we have never wavered even an iota in our will to coexist. To us, anyone who has affection and loyalty for Turkey and contributes to [the country] is a first-class citizen," Erdoğan stressed.

He added that Turkey currently hosts nearly 4 million Arabs, Kurds, and Turkmens as well as Muslims, Assyrians, Ezidis and other groups from Syria and Iraq.

From Spain to North Africa, Turkey's gates and hearts have been open to all the oppressed, said Erdoğan, stressing: "There never was and never will be room for discrimination in our hearts and minds.

"The real target of terror groups and their allies is our common homeland, and the best way to disappoint them is to see our differences as our most important richness," Erdoğan said.

The new church will mark the first time a church is built from scratch in the Republic-era. The church will be constructed on an empty lot belonging to the municipality near the Italian Cemetery in Yeşilköy neighborhood of Bakırköy district, with a high concentration of the Syriac community.

There are 25,000 Syriac Christians in Turkey, approximately 18,000 of whom live in Istanbul, according to unofficial figures.

Assyrians are a community that traces its heritage back to ancient Mesopotamia. They speak a Semitic language distinct from Arabic.