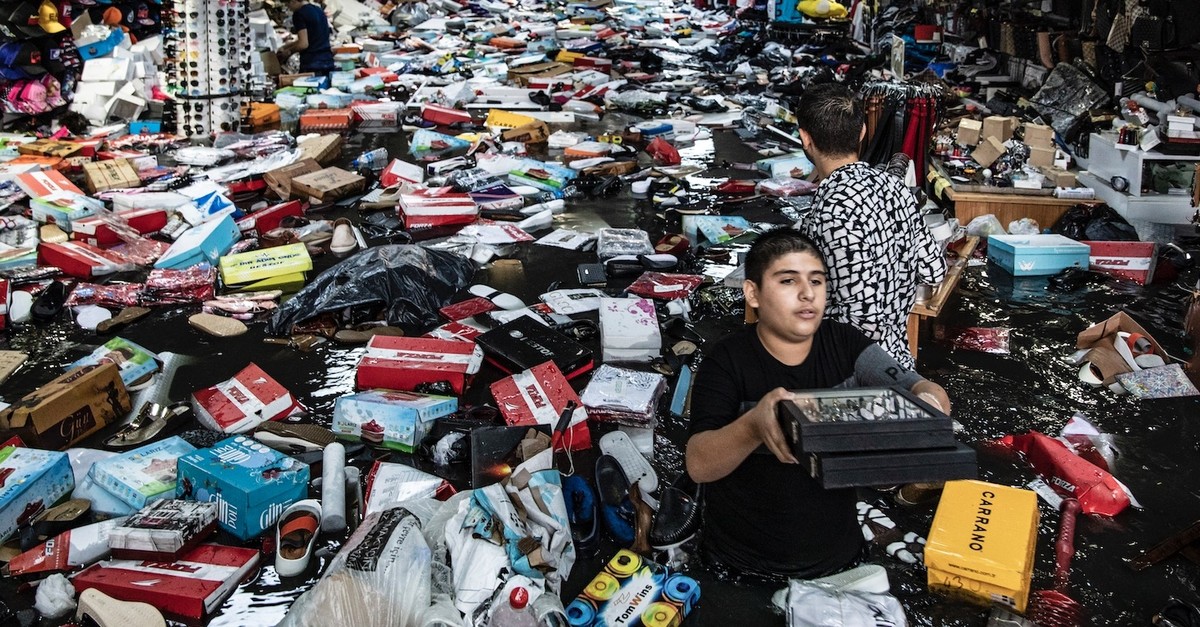 Istanbul's new Mayor Ekrem İmamoğlu, who went on a second vacation in two months since he took office, incurred criticism as Turkey's most-populated city was gripped by flash floods on Saturday. İmamoğlu, the first mayor from an opposition party in almost two decades, toured flood-hit areas Sunday and blamed the meteorology agency for not warning the municipality about the imminent floods.

The mayor faced criticism on social media for not returning to the city from vacation but İmamoğlu, whose video of his vacation aboard a yacht made rounds online, said he left only for two days and spent the rest of his six-day vacation to attend events in other cities.

Heavy downpours pounded Istanbul and other cities in northwestern Turkey on Saturday after a days-long heat wave with flash flood warnings from experts over the last couple of days, disrupted public transport and traffic in various areas.

Flash floods, in particular, wreaked havoc in lower parts and seafront areas of the city, including major transport hubs such as Eminönü, Beşiktaş, Üsküdar, Karaköy, Kadıköy and Kabataş. The lifeless body of a man was found under the Unkapanı Underpass near the Golden Horn in Fatih district. Reports said the man could be one of the homeless seeking shelter in the underpass, where floodwaters reached 190 centimeters in depth. It is not clear whether the man drowned during the flood or was unconscious or dead before the flood.

Avenues leading to Üsküdar Square by the Bosporus once again served as streams, flooding the square and producing images as if the sea met the land.

Many shops and homes were flooded in lower parts of the district where significant infrastructure, including some rain discharge tunnels, have been under construction for the last couple of years. The Kasımpaşa neighborhood in Beyoğlu was also hit by flash floods, inundating several homes and shops. The coastal road in Bakırköy, connecting to the Eurasia Tunnel crossing the Bosporus, was closed to traffic due to inundation. The city's landmark Grand Bazaar, a 558-year-old complex that recently underwent an extensive roof and infrastructure restoration, was also affected by a flash flood.

Avcılar, Sefaköy, Bahçelievler, Çatalca, Zeytinburnu, Sarıyer, Fatih, Esenyurt, Kadıköy, Üsküdar, Tuzla and Pendik were the districts that received the most rainfall. Experts said that some areas received as much as 113 kilograms of rain per square meter in only one-and-a-half hours, the same amount of rain that would normally occur throughout the winter.

The pedestrian underpass in Eminönü Square on the European side was filled with floodwater as the shops inside suffered great damage. A street caved in due to heavy rain in Üsküdar.

'THIS IS HOW CHP WILL RUN THE CITY'

Mehmet Tevfik Göksu, who leads the Justice and Development (AK) Party council members in the Istanbul City Council, said the İmamoğlu administration was responsible for the impact of the flood disaster. Speaking to the Sabah newspaper, Göksu said the disaster was not tied to the city's infrastructure but how the city administration handled it. "The meteorology agency and other agencies warned about rainfall days ago and if the municipality took measures, we wouldn't have problems. This unfortunately sets an example to demonstrate how the Republican People's Party (CHP) will run the city," he said, referring to İmamoğlu's party.

İmamoğlu visited Eminönü and Üsküdar yesterday in the company of municipality officials while a shopkeeper in Eminönü he came across criticized İmamoğlu. "Where have you been, Mr. Mayor? You should have been here [on Saturday]. There wasn't a single person from the municipality here," the shopkeeper said.

Speaking to reporters after his visits to disaster-hit areas, İmamoğlu acknowledged that the meteorology agency issued a warning to the Disaster Coordination Center of the municipality but claimed it was a downgraded warning. "They did not issue a proper warning and only gave a mid-level warning, and it was not as early as it should have been. The agencies should better conduct their early warning system," the mayor said. İmamoğlu also pledged a quick recovery. "We inspected the damage and our crews will be in the field," he said.

Heavy downpours will be effective throughout the northwestern quarter of Turkey, the Turkish State Meteorological Service (TSMS) said, and flash flood warnings were also issued for capital Ankara. Temperatures are expected to drop between 5 to 10 degrees Celsius.