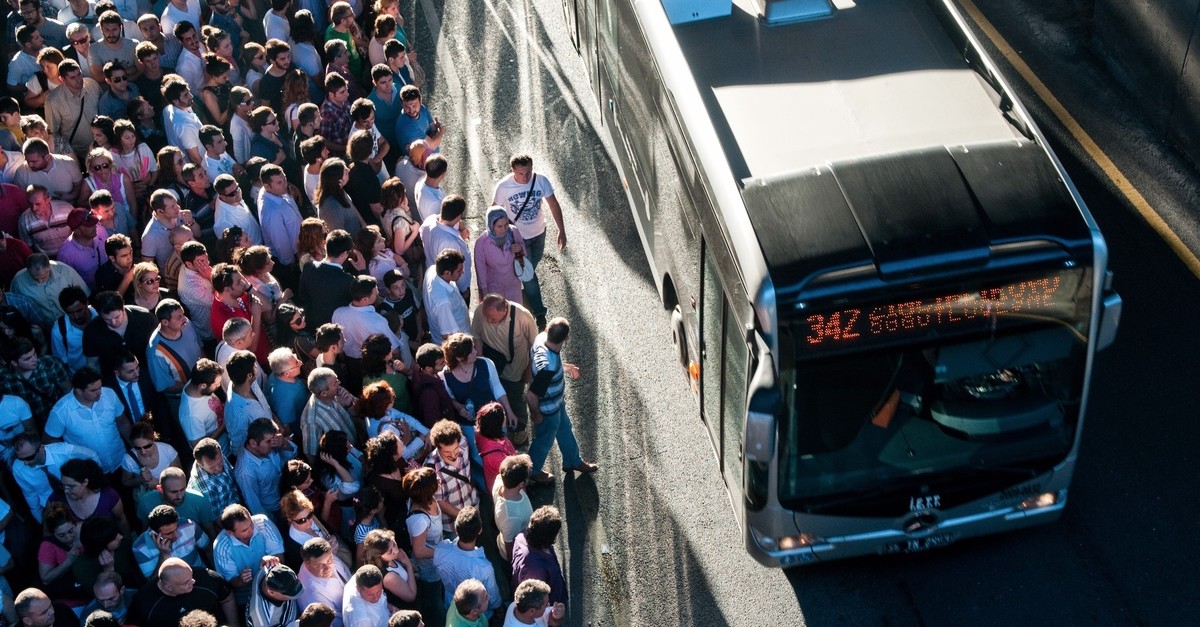 Metrobus stops brim with commuters especially during rush hour.
by Daily Sabah with DHA Sep 21, 2019 1:35 am

The metrobus, a bus rapid transit system in Turkey's most populated city, was launched in 2007 to address its ever-growing traffic problem. It worked miracles for years and saved thousands of commuters from spending hours in traffic and decreased travel times; however, as the population grows uncontrollably, to over 15 million, this popular means of transportation has hit a snag along the way: an ever-larger number of commuters. The issue has been in the spotlight since last week's stabbing incident in a metrobus over a row on grabbing an empty seat.

The 50-kilometer route sees almost an endless flow of commuters in morning and evening rush hours and though authorities introduced more buses along the route and switched to a longer timetable with more frequent trips, the problems linger.

Passengers complain it is "torture" to find even a small space to stand in the buses as the city's traffic has worsened with the start of the new school year when thousands of school buses hit the road.

Overcrowding is particularly evident in the first stops of the rapid transit route that takes commuters from Beylikdüzü on the far western corner of city's European side to Söğütlüçeşme on the Asian side.

Verbal arguments are common in metrobuses and sometimes they even end in brawls.

"People are on the verge of breakdowns. I see people fighting over empty spots whenever I take the metrobus," a passenger, who did not want to be named, says. "People fight over trivial matters, like giving seats to the elderly or someone looking to grab a seat just to read his book," he says.

Passengers point out that the problem is worse particularly for Beylikdüzü, as thousands travel every day from the district and nearby districts to work in the city's financial centers like Mecidiyeköy and Levent.

Most agree that an alternative is needed and the most plausible solution seems like an extension of a metro line to the city's suburbs. "This is a route built for carrying 500,000 people at most but today more than 1 million people use metrobus," a passenger points out.

"I have a car, but I have to take metrobus. If you use a car you're often stuck in traffic and there is always the risk of an accident.

So, I have to travel on metrobus which uses a separate lane," says a desperate passenger, who urged the municipality to find a solution to the problem.