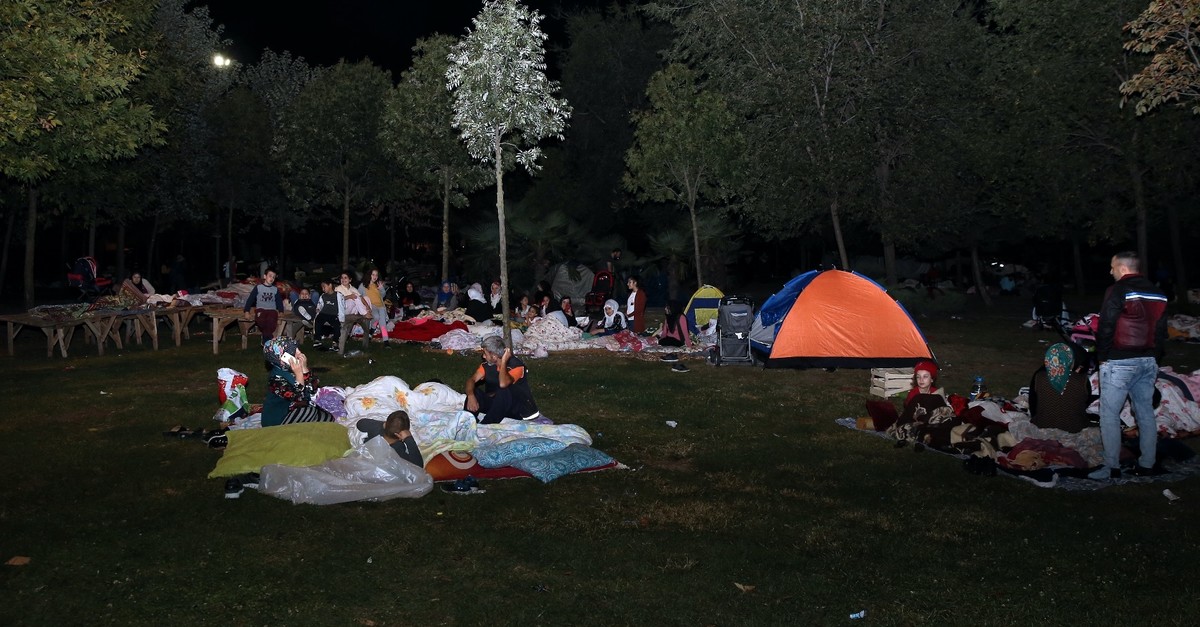 Experts in Turkey have warned people to take out compulsory earthquake insurance as soon as possible in order to protect themselves and their belongings. While insurance purchases are on the rise, people have also gone online in droves, searching for survival kits and tents.

"Compulsory earthquake insurance sales increased 100% in our company as well as in the whole country," said Sibel Doğaç, a sales director at Quick Sigorta, an Istanbul-based insurance company.

"Earthquake risk is a reality for Turkey and DASK [earthquake insurance] is a must for everyone," Doğaç warned.

Doğaç urged people to take out insurance without losing any time against the risk of losing all their assets due to material damage caused by a possible earthquake.

Some 24 people injured in a 5.8-magnitude tremor in Istanbul on Thursday were discharged from the hospital, Turkey's vice president said Friday. Speaking at a meeting on a national disaster response plan in Istanbul, Fuat Oktay said treatment for 10 others was ongoing. Some 314 aftershocks, the strongest being of magnitude 4.1, were recorded after the quake, Turkey's Disaster and Emergency Management Authority (AFAD) said Saturday on Twitter. Turkey is criss-crossed by fault lines and prone to earthquakes. Experts have long warned that a major earthquake is expected to hit Istanbul, Turkey's most populous city with more than 15 million residents. On Aug. 17, 1999, a huge magnitude 7.4 earthquake centered on the northwestern city of İzmit devastated vast areas in the country's densely-populated northwestern zone, notably around Istanbul. At least 17,400 people were killed including 1,000 within Turkey's economic capital. A large quake could devastate the city of 15 million, which has allowed widespread building without safety precautions.

In a statement to AA, Hepsiburada Chief Commercial Officer Mutlu Erturan said that they continue to meet customers' needs in a fast, practical and reliable way with more than 25 million products offered in more than 35 categories.

"According to Hepsiburada searches made after the earthquake, the whistle search saw a sevenfold increase, while power bank search doubled. Earthquake bags, or survival kits, searches increased tenfold, while flashlight searches tripled," she further informed.

Erturan noted that Hepsiburada customers could find products on the platform such as flashlights starting from TL 7.90, earthquake bags from TL 249 and all first-aid needs, adding they could also purchase whistles with a price tag of TL 9.90 and blankets at TL 25.

Bülent Elçin, head of commerce at GittiGidiyor, stated that earthquakes are a fact of life and that Turkey is located in an earthquake zone. "We wish we could always be prepared for an earthquake as the entire country, but our sales and search figures indicate that after the earthquake, the sales figures and search rates of some products increased." Elçin stressed that according to the average daily sales in September, blanket sales increased by 70%, while tent sales saw a 35% increase after the earthquake. "All these results point to a movement to increase pre-earthquake protective and post-disaster relief measures," Elçin added.

AFAD said the quake centered in the Mediterranean Sea off the province of Muğla hit at 10.50 a.m. The tremor occurred at a depth of nearly 109 kilometers (68 miles) and was felt in the resort town of Marmaris, some 144 kilometers away. No casualties or material damage was reported following the earthquake.