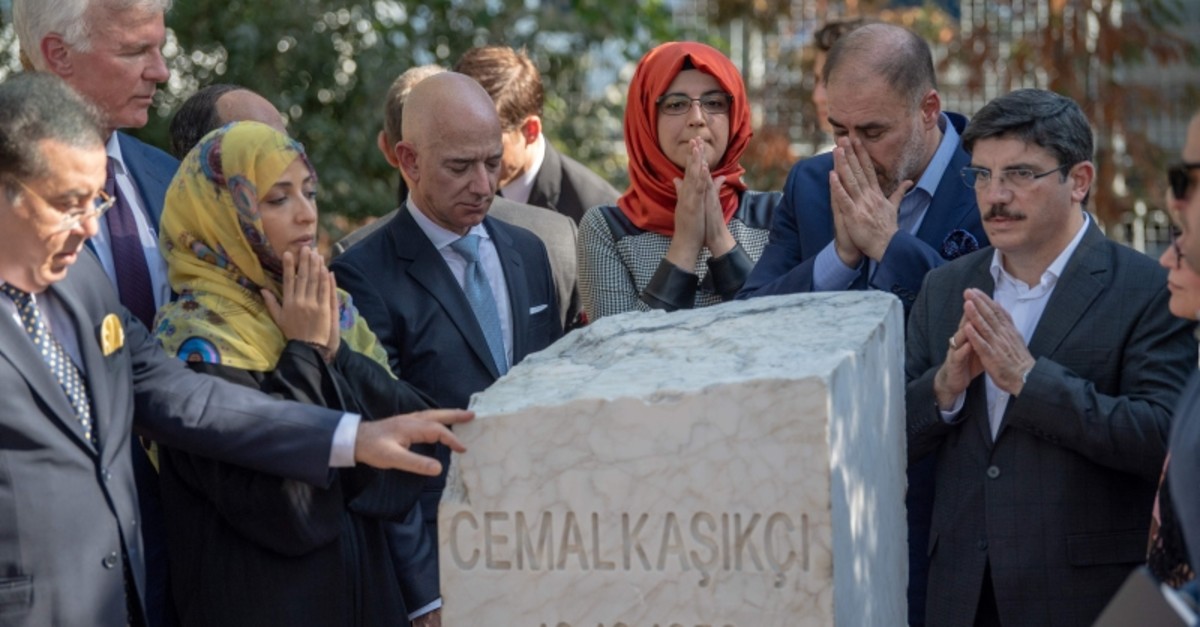 | AFP Photo
by Daily Sabah with DPA Oct 02, 2019 9:51 am
International media groups, human rights organizations and friends of Jamal Khashoggi on Wednesday held a memorial near the Saudi consulate in Istanbul, where the Saudi journalist was murdered.

The memorial began just after ‪1:14 pm‬ local time, the time that Khashoggi, a Washington Post contributor hailing from a prominent Saudi family, walked into the consulate on Oct. 2, 2018, to collect documents to marry his fiancee Hatice Cengiz, who was waiting for him outside. Yet, her waiting quickly turned frantic as he didn't come out again. Agents of the Saudi government killed Khashoggi inside the consulate and apparently dismembered his body, which has never been found.

The ceremony was attended by various media outlets, human rights groups and friends and family of Khashoggi. Also on the stage were U.N. special rapporteur on extrajudicial killings Agnes Callamard, who investigated the murder, and Yemeni Nobel peace laureate Tawakkol Karman. Another important attendee was Washington Post owner Jeff Bezos, who sat beside Khashoggi's fiancee Cengiz.

Unlike other memorial services, friends of Jamal Khashoggi called the event "a moment of unsilence" because silence is exactly what the murderers of Khashoggi want.

"Turning our back on what is intolerable is not an option," Callamard said during her speech at the memorial.

"No one should get away with murder, no matter who they are," she said.

Callamard, said in a previous report that the state of Saudi Arabia was responsible for the murder. The report also found "credible evidence" that linked Crown Prince Mohammed bin Salman (MBS) to the killing of Khashoggi. The rapporteur noted she had received no cooperation from Riyadh and minimal help from the U.S.

In a brief speech she said that "not even a power as influential as Saudi Arabia should get away with murder... and then audaciously rely upon the indifference of the world to provide them with cover."

Callamard further underlined that "justice must be served - and if justice is not met today, then we will shine our light tomorrow and ‪the day after tomorrow."

Honoring the journalists who investigated and reported on Khashoggi's murder, she said, "Persist! Expose! For Jamal and other journalists around the world... please do not give up, please keep shining your light for justice."

Yemeni Nobel peace laureate Tawakkol Karman, on the other hand, demanded justice for Khashoggi's murder as well as for the crimes in her home country, saying the same "rogue regime" is behind both.

Karman further added, "No country can do this. No country, no matter how brutal, could commit this crime. Only ISIS [Daesh]could do that. No country, other than the Saudi kingdom, could be like ISIS."

Karman also expressed that Khashoggi's murder served to "undermine all Salman's efforts to promote himself as a global leader," indicating that this will put an end to the royal's political ambitions.

In a very short speech, Bezos dubbed the murder "unimaginable," saying, "You (Hatice Cengiz) need to know you are in our hearts. We are here and you are not alone."

No one has been held accountable for Khashoggi's death, although Turkish and Western intelligence agencies say the order to kill him could only have come "from the highest levels of the Saudi government."

Initially denying and later downplaying the incident as an accidental killing in a fistfight, Riyadh finally admitted almost three weeks after his disappearance that Khashoggi was murdered in a premeditated act but denied any involvement by the royal family.

Ankara said Riyadh's statement is not satisfactory and demanded genuine cooperation. President Recep Tayyip Erdoğan has brought the topic up at all international platforms since the murder, and his remarks have influenced international public opinion.

Turkey's Presidency Communications Director Fahrettin Altun on Wednesday shared yesterday a series of statements regarding Khashoggi's legacy and Turkey's stance over the issue.

"It has been a year since #JamalKhashoggi was murdered inside the Saudi Arabian Consulate on Oct. 2, 2018. Thanks to our President @RTErdogan's astute stance, Turkey has continued its efforts since the first day to shed light on this gruesome murder," he said, adding that they have precluded the cover-up of this "organized and premeditated murder" by using all means at their disposal and yet Saudis' uncooperative stance still "overshadowed" the case's transparency.

"Turkey once again reminds that it will closely follow #JamalKhashoggi trial and reiterates its call for the international community to take concerted action against the murder," Altun further underlined.

While Turkey has been doing everything it can to bring light to the incident, the international community has failed to take a strong enough stance against the murder. Except for Germany, many European states only released a condemnation over the issue, overlooking the scale of the case's importance, which led to the lack of unity among the EU states. The U.K. and Spain continued to provide weapons to Saudi Arabia while Germany, Denmark and Finland announced that they will halt the selling of weapons to the kingdom. France, on the other hand, preferred to issue a visa ban to the Saudi authorities.

However, a year after the murder, the European Union paid tribute to the memory of Khashoggi on Wednesday.

"One year after his murder many questions still remain unanswered. The European Union reiterates the need to ensure full accountability for all those responsible and insists on a credible and transparent investigation of the circumstances of the killing, as well as due process for the defendants undergoing trial in Riyadh," an EU spokesperson said in statement.

The spokesperson said that like Khashoggi, journalists are too often the target of attacks in many countries.

"On this occasion, the European Union reaffirms its unequivocal commitment to the freedom of the press and the protection of journalists across the world," read the statement.

International human rights groups also demanded justice for Khashoggi yesterday, saying that a year after his brutal murder, Saudi authorities had yet to provide any "meaningful accountability."

The rights watchdogs also called on Riyadh to release the numerous government critics who remain in custody.

The New York-based watchdog criticized recent comments by the kingdom's de facto ruler, MBS, in which he accepted collective responsibility for Khashoggi's murder, but denied he was personally to blame.

"If he's serious, the crown prince and his government should provide transparency into the ongoing trial and reveal everything they know about the planning, execution, and aftermath of Khashoggi's murder," HRW's Middle East director, Sarah Leah Whitson, said.

Crown Prince MBS told U.S. broadcaster CBS Sunday that he did not order the murder, but took "full responsibility as a leader in Saudi Arabia."

U.N. special rapporteur Callamard responded on Twitter: "There is in this statement an implicit recognition that the killing of (Khashoggi) was a State killing. It happened under his watch as quasi head of state. The State is therefore implicated as he is."

Amnesty International said the crown prince's admission of "full responsibility as a leader in Saudi Arabia" would remain a public relation stunt if not met with immediate action.

This must include "prompt and unrestricted access to independent human rights monitors into the country, including to observe and publicly report on the ongoing trial," said Amnesty's Middle East research director, Lynn Maalouf.

In a letter to King Salman, the Vienna-based International Press Institute demanded a transparent trial for those implicated in Khashoggi's murder.

"As recommended by the U.N. special rapporteur, the government should support a U.N.-led additional criminal investigation and conduct a transparent retrial with international input, support and oversight," the institute said.