A paid overpass? Istanbul mayor under fire for solution to crowding 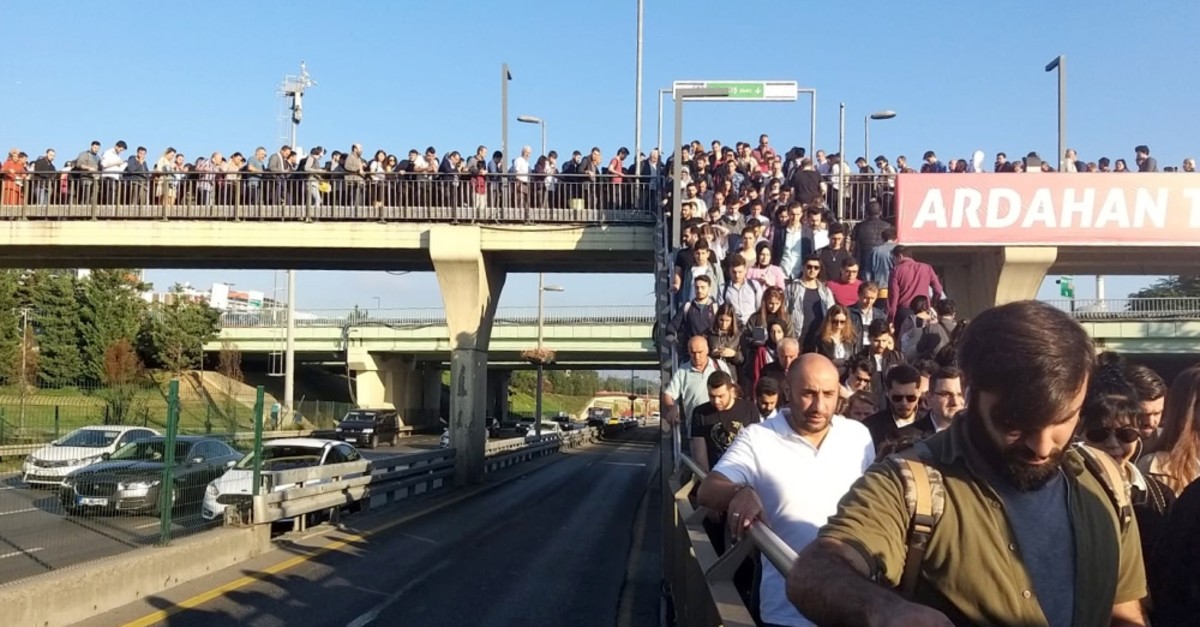 Altunizade metrobus station is one of the busiest especially in morning rush hour.
by Daily Sabah Oct 05, 2019 12:04 am

As a popular metrobus station has become impossible to enter due to overcrowding, the Istanbul municipality decided to relocate machines collecting metrobus fares on an overpass. However, the move, which came amid debate over poor handling of crowds during rush hour further infuriated the public. This is because the machines are now in the middle of the overpass and pedestrians who do not enter the station are also required to pay to cross the overpass. "He really helps people hug each other," a social media user commented under the photo of the overcrowded metrobus station in the city's Altunizade district, referring to Mayor Ekrem İmamoğlu's famous motto "to hug everyone" regardless of their political affiliation.

A few months into his term, Istanbul's new mayor faces criticism for the municipality's less than ingenious solution to the overcrowding problem on the popular rapid transit route.

The metrobus, the most viable mass transit option in Turkey's most populated city, has never lacked massive numbers of commuters during rush hour, but the problem was aggravated this month. Altunizade metrobus station on the city's Asian city is particularly notorious for commuters swarming the place, hence the municipality decided to move toll collection points in a bid to ease crowding a few days after they announced they'd dispatch additional buses to reduce crowding.

İmamoğlu, who has spent most of his term in office on holidays and travels to other cities, was quiet on the issue but the municipality spokesman Murat Ongun was quite vocal and even apologized for the crowding. However, the spokesman also claimed that the paid overpass issue was not a big deal, saying there was a nearby underpass that pedestrians could use in statements quoted by Turkish media outlets. "It is not true that you have to pay to cross the overpass. There is not any residential area on the other side of the overpass, only a green space and you can reach there through the metro underpass," he tweeted.

Ongun also ignored people's complaints for having to pay and opted instead to criticize a reporter from the public broadcaster TRT Haber. "TRT is now on the same level as paid social media trolls," Ongun tweeted and claimed the municipality increased "quality and services" in metro and metrobuses. However, pedestrians using the overpass and Sena Ünal Kaya, the TRT reporter who did the story about the paid overpass disputes his account. Kaya said in a statement that her report was accurate and the municipality officials she tried to contact to comment on the issue refused to speak to her. She called on Ongun to correct his statements.