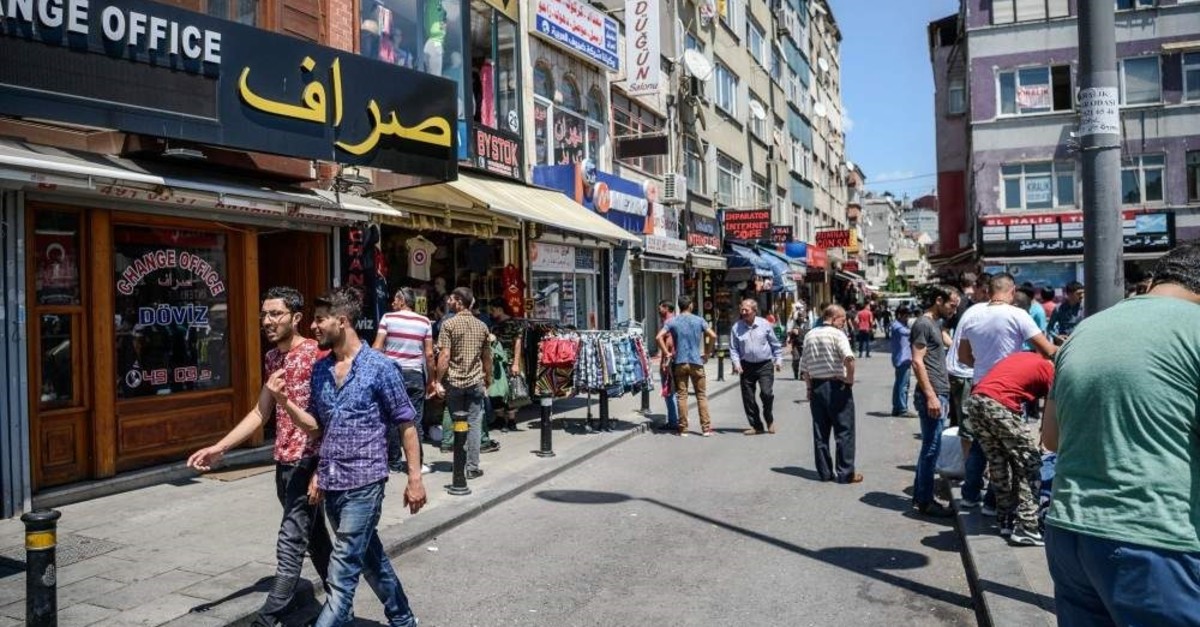 Syrian and Turkish people walk in a street next to shops with Arabic letters in Fatih district, Istanbul in this undated photo. (AFP Photo)
by daily sabah Oct 18, 2019 9:12 pm

The Istanbul Governorate announced on Friday that 5,945 Syrian refugees not registered to reside in the city were sent to temporary accommodation centers in other cities. The governorate also said 34,397 illegal migrants were transferred to migration centers in other cities between July 12 and Oct. 16.
Turkey is home to some 4.5 million Syrian migrants who fled the civil war, which has been ongoing since 2011 when Bashar Assad's regime brutally repressed peaceful calls for democracy. Sharing a 911-kilometer border with its southern neighbor, Turkey has repeatedly proposed establishing a safe zone in northern Syria to stop further refugee influxes into its own territory and into Europe, and to relocate Syrians living in migrant camps in Turkey while providing conditions allowing others to return.
The governorate announced in July that Syrian refugees without registration with authorities or registered elsewhere in Turkey would be sent back to Turkish the provinces they arrived from as the refugee population in Turkey’s most populated city swelled. In a statement in July, the governorate announced that there were 1,069,860 registered foreigners in Istanbul, made up of 522,381 foreigners with residence permits and 547,479 Syrians under temporary protection status. This constitutes one-fifteenth of the population of Turkey's economic and cultural population, as Turkish Statistical Institute (Turkstat) figures as of December 2018 put the megacity's population at 15,029,231. Syrians without temporary protection status and without registry and proper identification are being transferred to determined provinces according to a directive of the Ministry of Interior, the statement said, adding that Istanbul is closed to further registration for temporary protection status. Accordingly, a deadline of Aug. 20, 2019 had been set for foreigners of Syrian nationality in Istanbul registered in another province.
Foreign nationals with legal rights to reside in Istanbul should keep their passports and/or their temporary protection identity cards on them at all times to be presented to security forces during routine checks, the governorate said.
The announcement came at a time when issues related to Syrian refugees and their future in the country are at the forefront of Turkish public opinion and the political scene.
Last Update: Dec 20, 2019 1:07 am
RELATED TOPICS