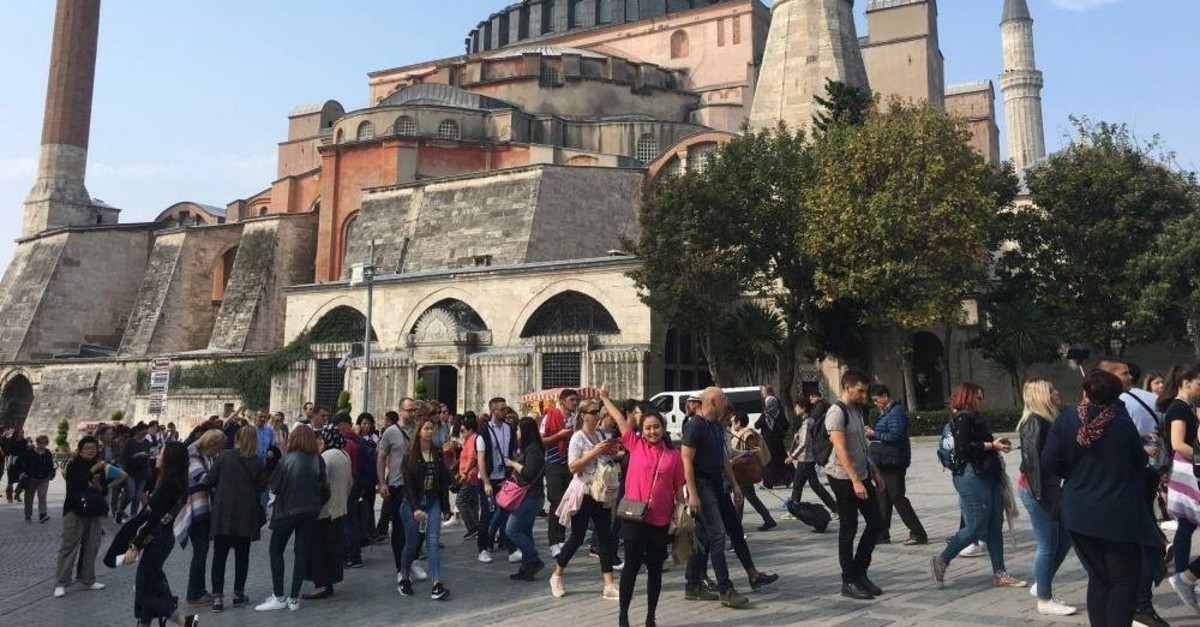 Historic sites in Istanbul are enjoying an influx of foreign tourists, especially people flying from Europe and the Far East, who are taking advantage of the unusually warm weather this late in the year

A city rich in tourism, history, culture and gastronomy, Istanbul has been attracting more tourists this autumn due to the unusually warm weather, which has been steadily above seasonal norms.
This has led to both foreign tourists and local citizens flocking to the historical and touristic areas of the city.
Crowded tourist groups, particularly on Istanbul’s historic peninsula, have been making local tradesmen and hoteliers smile this year.


What has also particularly drawn attention are the tourist groups that include transit passengers using Istanbul for connected flights.
Named the world’s eighth most visited city in 2018, Istanbul recorded its best numbers in the last five years by hosting nearly 10 million foreign tourists, 9.9 million to be precise, from 200 countries as of August this year.
According to the Istanbul Provincial Directorate of Culture and Tourism, the figure was up by more than 1 million compared to the last year’s eight-month period when some 8.9 million foreigners visited the metropolis.
The city has come a long way since 1998 when it hosted 2.3 million foreigners. Last year, it welcomed 13.4 million foreigners and in August 2018 alone, 1.3 million foreigners visited Istanbul. Furthermore, the monthly figure rose to 1.5 million this year in the same period.
LONG LINES
The city’s historic Sultanahmet neighborhood, located on the historic peninsula, is particularly attracting the most crowds. Tourists have been forming long lines in the neighborhood, waiting for their chance to visit Hagia Sophia and take selfies in front of the historic building, which stands out as one of the most important architectural structures in the world.
Tourists from many parts of the world, especially from Europe and the Far East, have shown quite an interest in Hagia Sophia. Apart from the famed structure, another must-see place, Topkapı Palace, has also been welcoming a large number of tourists.
For the first time in history, tourists in Istanbul are expected to exceed the city’s own residents in number. The city is expected to receive 15.5 million tourists by the end of 2019.
So far this year, a significant increase was observed in the number of European tourists. Some 2.6 million tourists came to the city from the Arab countries as of the end of August. Germany led the way among nations with 759,000 tourists in said period. It was followed by Iran with 595,000, Iraq with 471,000, and Russia with 448,000 visitors.
On the other hand, the occupancy rate in Istanbul, which was 84% in August 2018, increased by 4.4% in August 2019 to 87.7%. The average daily hotel room prices, on the other hand, increased by 107.3% to 20.1% compared to August 2018.
FREE ACCOMMODATION
Many transit passengers in tourist groups have been touring around the city as well. Most prefer to visit Istanbul’s historical and touristic sites instead of waiting at the airport. National flag carrier Turkish Airlines (THY) also provides a free stopover service for transit passengers staying in Istanbul for over 20 hours until their connected flights.
The carrier has also attracted many transit passengers to Istanbul with its free accommodation services, which was launched in March 2017 for passengers from Pakistan to attract more flyers and to support Istanbul’s tourism.
THY’s transit passengers with over 20-hour waiting periods can use hotel vouchers provided while booking their flights. With these vouchers, economy passengers can stay at a 4-star hotel for one night in the Sultanahmet and Taksim areas, while business passengers are provided with a two-night stay at a five-star hotel.
Last Update: Dec 20, 2019 1:08 am
RELATED TOPICS