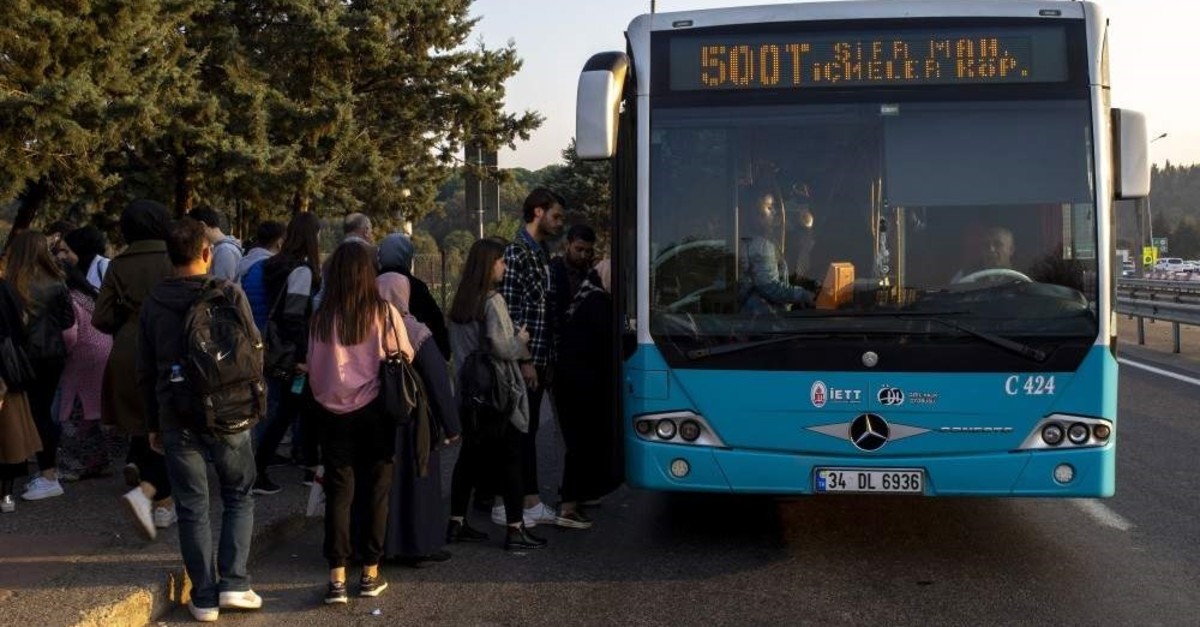 The 500T line is less popular nowadays but still carries thousands every day. (AA Photo)
by Daily Sabah Nov 24, 2019 7:45 pm
Finish reading a book or watch a film. Still, you wouldn’t be where you wanted to go if you intend to drop off at the last stop. Over 25 years after its launch, the 500T bus line remains one of the longest bus lines in Istanbul.
Staple of countless jokes, surveys and even poems, the 75-kilometer long route of the 500T takes passengers from Tuzla on the Asian side to Cevizlibağ on the European side and vice versa. It is not nearly as popular as it once was, thanks to the increased number of alternatives in mass transit. Yet, the bus still carries about 57,000 passengers every day.
The route covers 12 districts of Turkey’s most populated city, stopping at 78 bus stops. Depending on traffic, one trip can take up to three hours, longer than the entire route of the Metrobus, which similarly operates between two sides of the city running along an exclusively reserved lane. It is the third-longest route among Istanbul’s plethora of bus lines, but appears longer, as others usually take an expressway with few stops.
The bus line was rather "informal" at first, having been set up illegally by a group of bus operators in 1986 in order to patch up worsening transportation problems. It was later included in the formal transportation authority İETT’s growing route network in 1994. Buses operating on the route have long been the most crowded, with little breathing or standing space and strong odors associated with sweating passengers, daunting prospective commuters. Nowadays, they are cleaner thanks to regular disinfection and less crowded because of alternative routes. The number of trips has also increased, with a bus leaving every four minutes.
A route this long forces passengers to occupy themselves with whatever they can, from reading newspapers to learning a new language with online apps. Others admire Istanbul’s changing landscape along the lengthy route. Some meet their future spouses, while others have even proposed along the route.
One passenger conceived and patented the idea for water dispensers while taking a particularly brutal three hour trip. Kemal Berge, who has been working as a bus driver on the route before 500T’s launch, remembers a woman giving birth on the bus around 12 years ago. “It was somewhere near Kartal [on the Asian side] when a girl shouted from the back. She told me to drive slower and pointed to a woman lying on the ground. She was clearly having birth pangs,” he recounted to Anadolu Agency (AA). “Male passengers moved to the front to clear the way for the women to care for her. I drove slower and slower. A woman passed a cloth and another was holding the pregnant woman’s arms. A child was born about half an hour later,” he says, and still recalls the baby’s first cry. He dropped off the other passengers and took the bus to the nearest hospital where the woman and her baby boy were seen to.
Driver Ahmet Erim remembers the days when passengers would talk to each other and spark up friendships and relationships along the route, some often ending in marriage.
“Nowadays, young people are less friendly with each other. They are so occupied with their cellphones and always put on headphones. Most also pretend to be sleeping so they don't have to give up their seats for elderly people who need it,” he complains.
Erim says the 500T is better in terms of prices in comparison with other routes. “You only pay TL 5.20. It is more expensive to change buses along the route. The only problem in this route is the high traffic. If only there were fewer cars, the 500T would be as popular as it was in the past,” he says.
Last Update: Dec 20, 2019 1:53 am
RELATED TOPICS