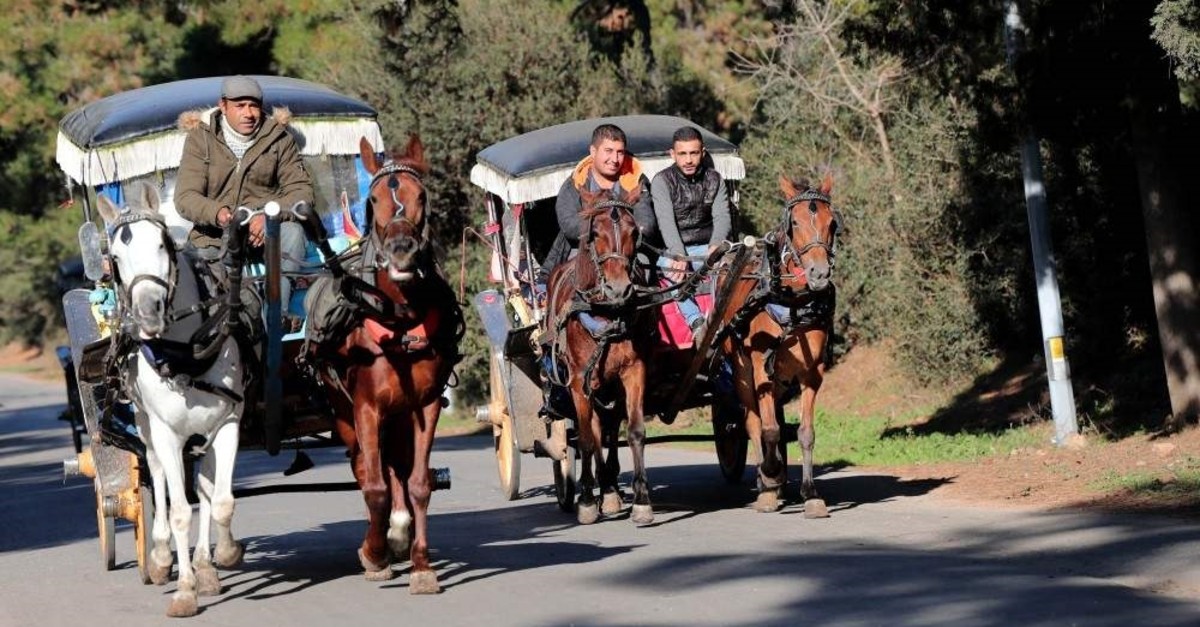 A sit-in protest calling for a ban on horse carriages in the Princes' Island entered its fifth day on Monday.

The protesters outside the Istanbul Municipality called on Mayor Ekrem İmamoğlu to impose the ban, which was part of his election promises.

A group of animal rights activists had launched the protest after 81 horses diagnosed with glanders were culled in Büyükada, one of the islands off the Istanbul coast. The outbreak was blamed on the bad conditions the horses were exposed to.

Horse carriages have been a staple on the islands as a popular tourist attraction but the maltreatment of the animals by their owners has long drawn the ire of activists.

İmamoğlu had pledged before the elections six months ago that he would ban the horse carriages. Speaking at a news conference Monday, the mayor reiterated his promise but stopped short of a blanket ban, saying some 35 horse carriages will remain as a "symbolic" means of transportation on the islands.

Protesters tried to set up a large tent outside the city hall but were prevented by the municipal police. They later set up tents in the park opposite the building.

Doğa Altınsay, one of the protesters, said they ignored rainfall and strong winds just to attend the protest. "Still, we have high morale because we are here to end this. We don't want more horses to die," Altınsay said.

Zeynep Özek, who found out about the protest on social media, joined the sit-in over the weekend. "This is a sacred act for me. These people are trying to save at least one creature. I hope more people will support them," she said.

Fuat Mehmedli, who came from the northern city of Kastamonu to attend the protest, said they will continue the "resistance" until all horse carriages are removed from the islands.

Onur Kavık, a university student, accused the mayor of not fulfilling his election promise and turning to "political maneuvers" instead, as he pointed to İmamoğlu's statement Monday saying the carriages would be "symbolic." "We will continue our resistance until there is not a single horse on the islands," he said.

Last week, the Istanbul Governorate imposed a ban on horse-drawn carriages for three months due to the glanders outbreak.