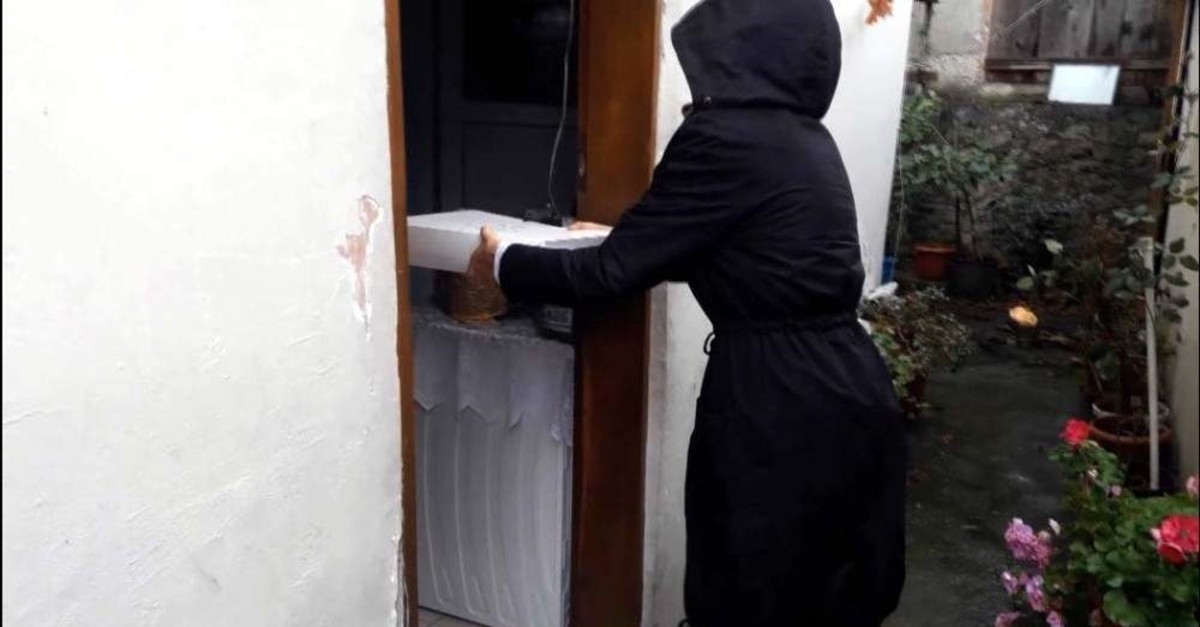 Istanbul's ,Robin Hood, sent wedding gifts to a woman who wanted to marry off her son via one of his fellow aides, seen in the photo dressed in black. (DHA Photo)
by Daily Sabah with DHA Dec 25, 2019 1:24 pm

Istanbul’s “Robin Hood,” is a mysterious philanthropist who, along with his fellow aides, distributes envelopes full of cash to those in need every now and then. This time around, he showed up in Üsküdar district on Saturday to make a woman's wish come true.

Vecihe Algül, who lives in the Kuleli neighborhood of the Üsküdar district on the city’s Anatolian side, had previously expressed her desire to marry off her son. One day after reading about the legend of Istanbul's modern-day Robin Hood, she thought to herself how nice it would be if the mysterious philanthropist gave her TL 5,000 to cover the wedding costs. Little did she know that her wish would be granted and her son's wedding costs would be covered. In fact, she would get much more than she was hoping for, which is good considering the fact that weddings in Turkey cost a lot more than TL 5,000 and are a burden on many Turkish families.

The mysterious individual did not sit idle for too long after learning about the situation through the media, and sent several wedding gifts to Algül, including five full gold coins each worth around TL 1,823, TL 1,000 in cash and chocolates.

Overjoyed by the gifts, Algül told Demirören News Agency (DHA) that she really needed the money because her husband is paralyzed and unable to work and she was contemplating how to marry off her son.

The individual, who adopted the moniker Robin Hood by the Turkish media, has occasionally shown up in the slums of several districts before, including those of Hasköy and Başakşehir on the European side and the Tuzla Mimar Sinan neighborhood and Ataşehir district on the Anatolian side. He and his team have been leaving envelopes full of cash at the doorsteps of needy families and sometimes paying off the debts families owe to local grocers and giving pocket-money to children in the area.