Istanbul traffic provides both risks and opportunities for Turkish vendors 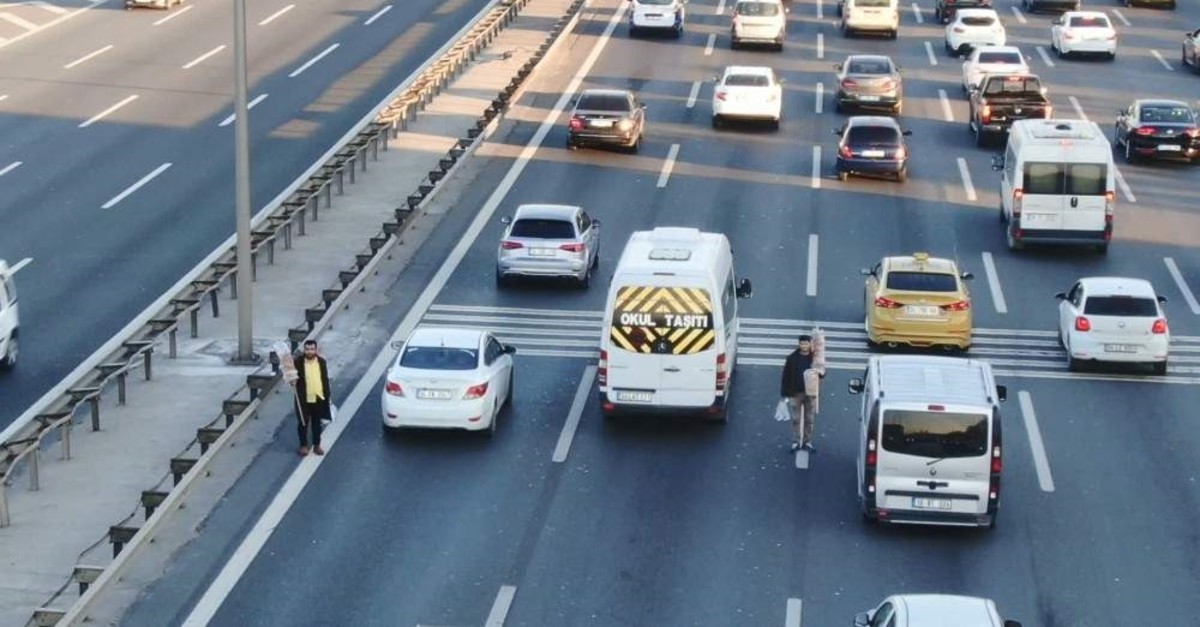 The oncoming traffic and fines do not deter vendors on Istanbul's highways. (DHA Photo)
by Daily Sabah with DHA Jan 05, 2020 7:15 pm

Being stuck in gridlock in Istanbul during rush hour is a familiar frustration for motorists and passengers alike. Yet, severe congestion is good news for some: street vendors. Ignoring the risks of standing amid oncoming traffic, these opportunistic sellers hawk all sorts of goods to drivers trudging along, from water to bagels, cellphone chargers and more. The greater the congestion, the more they earn, despite risking their lives as well as potential fines.

Touting goods on the road is a crime punishable by up to TL 154, however, this is a rather small change given some sellers can earn up to the same amount in a day. In the summer, they earn as much as TL 6,000 monthly.

Fırat Bakış waves bottles of water at passing cars in the Halıcıoğlu section of the D-100 highway that straddles Istanbul's European side. Despite having a full-time job, he nonetheless drops by the highway whenever he can, to take advantage of rush hour sludge after his shift. "I earn TL 200 and sometimes even TL 250 at times in the summer. But in winter, the most you can earn is TL 100. There is nothing to fear. Cars do not move and our dialogue with the drivers takes two seconds at most. The only problem is the police," he said.

Yeşim Al sells sweet wafers at an underpass in the same area. "I make a living for my children. It doesn't pay much but I have to do it," she said.

Yılmaz A., who did not give his last name, is another water seller. He has been fined thousands of Turkish liras, but is intent on not giving up. "I am trying to make an honest living here. I am not a thief," he said. Still, he does not recommend it to anyone. "You have to bear the exhaust pipe fumes. You don't have steady pay and there is no social security. No one will care if a car hits us here," he said.