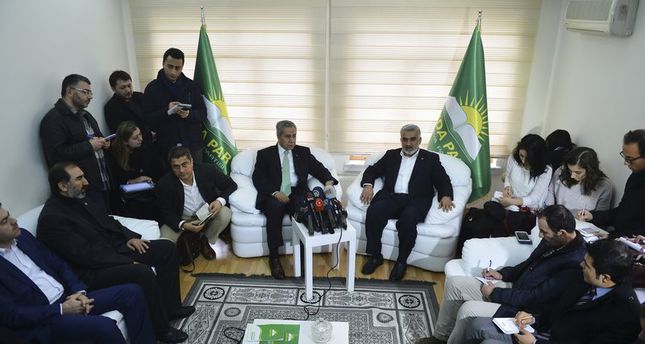 by Daily Sabah Dec 19, 2014 12:00 am
Deputy Prime Minister Bülent Arınç has stated that the government will take into consideration all actors who adopt a democratic and political rhetoric to participate in the reconciliation process. He also pointed out that the HDP is not the only representative of the Kurdish people in Turkey.
He made the statements after meeting with pro-Kurdish Rights and Freedoms (HAK-PAR) Party and the Free Cause Party (Hüda-Par) on Thursday and Friday respectively.

"The People's Democratic Party (HDP) is not the only option or representative of the Kurdish people" Arınç said, adding that the AK Party is the first choice of many Kurds throughout the country. He pointed out that the government wants to put HDP in a critical position in the reconciliation process, but the party does not seem to be distancing itself from violent means.

Arınç underlined that the HDP's responsibility should not be solely about visiting PKK's imprisoned leader Abdullah Öcalan in İmralı Prison and acting as couriers carrying Öcalan's messages to the Qandil Mountains and bringing messages from Qandil to a few people in Turkey.
He stated that the government is in favor of parties which adopt political means, not violence, while noting that everyone should contribute to the resolution of the Kurdish issue by political and democratic methods.

"HAK-Par and Hüda-Par are parties which base their ideologies on improving our civilization and focus on humans" said Arınç, who noted they have never embraced violent means to convey their political messages.

Arınç stated that a successful resolution to the reconciliation process cannot be possible if there is no public order ensuring the safety and security of the people, while he noted that the process concerns 77 million people who live in Turkey, not just the HDP.

He went on to say that it is necessary for all people to think and act positively and make productive decisions to reach a peaceful resolution.
The Deputy PM said that the main reason behind his visit to pro-Kurdish political parties was to listen to the ideas of everyone who can positively contribute to resolution.

"We will continue to carry out similar visits to parties which denounce the use of violence and arms and embrace using peaceful methods to deal with issues" said Arınç. He noted that the Monitoring Committee of the reconciliation process has not yet been finalized and signalled that the committee may consist of members from different actors.

Arınç also stated that he had not seen the draft reconciliation plan and said that the government will determine what steps will be taken next when concrete details are revealed and that it is not possible to base reconciliation initiatives on news articles and allegations.

The Deputy PM's visit was welcomed by chairmen and members of both parties. Kemal Burkay, the former chairman of HAK-PAR has stated that they are in favor of reconciliation rather than polarization and they emphasize the resolution of conflicts through dialogue.

"We will continue to express our support in this regard" said Burkay, who stated that the resolution of the Kurdish issue is not only important for Turkey but will also have positive implications for the region.

During his speech, Arınç also responded to questions about the December 14 Tahşiye Operation and said that he is in favor of releasing the suspects by the court pending a trial.

The "reconciliation process" initiated by the AK Party government began when a ceasefire was signed between the Turkish government and the PKK followed by a series of democratic reforms to improve the rights of Turkey's Kurdish population. It is reported that over 50 percent of the people in throughout the country are in favor of the initiative.
Last Update: Dec 19, 2014 3:53 pm
RELATED TOPICS