HDP committee heads to Qandil Mountains as reconciliation back on track 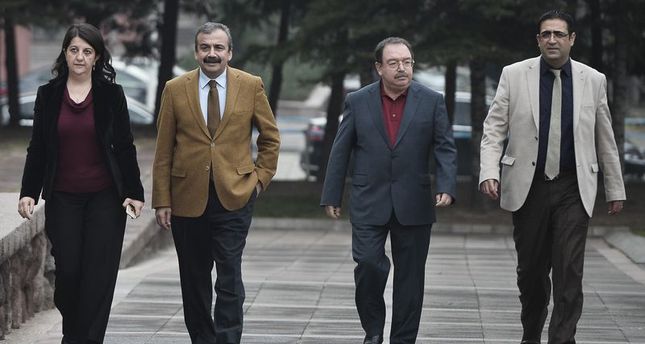 by Daily Sabah Dec 23, 2014 12:00 am
As the reconciliation process continues to be negotiated between Ankara and the Peoples' Democratic Party (HDP) in order to end the decades-long PKK conflict, the details of Monday's meeting have been released. The meeting was described by all parties as a "step taken towards a productive future in the reconciliation process," and it was further stated that establishing a Turkish intelligence office in Irbil is on the agenda.

As part of the reconciliation process between Ankara and Turkey's Kurdish population, the National Intelligence Organization (MİT) is expected to set up in Irbil to coordinate the reconciliation talks with PKK headquarters in the Qandil Mountains in Iraq.

The HDP committee, including Deputy Chairs İdris Baluken, Pervin Buldan, Istanbul Deputy Sırrı Süreyya Önder and Kurdish politicians Hatip Dicle and Leyla Zana are scheduled to visit the Qandil Mountains only days after talks with Deputy Prime Minister Yalçın Akdoğan and imprisoned PKK leader Abdullah Öcalan, who is serving a life sentence in the İmrali Island prison. The HDP committee is expected to hold talks with the PKK administration over Ankara's position on the reconciliation process and Öcalan's December 17 statements.

Prime Minister Davutoğlu said that the process is back on track and gained positive momentum. "We are happy to observe that a positive environment is emerging as the resolution process is now back on track. From this moment we will expand the stakeholders in the process by adding all the political parties, nongovernmental organizations and religious groups in the region."

Referring to the deadly Kobani demonstrations on October 6-7, Davutoğlu stressed that the reconciliation process is not an alternative to public order and that the government is determined to maintain public order. Concerning the future of the process, Davutoğlu said that it would not be appropriate to mention any specific date for its conclusion. "Instead of raising expectations and mentioning dates about the future of the process we focus on reaching tangible goals and reflecting their positive effects on daily life," he said.

Following Monday's meeting between the HDP committee and Akdoğan, Önder said that crises have been left behind and a productive period is ahead for the reconciliation process.

He said: "We have been through numerous fragile and problematic moments for a number of reasons," the main reason behind this was the fact that the reconciliation process is unprecedented in Turkey's political history. He continued by saying that the negotiating actors have sought to learn from the examples of other countries that have experienced similar problems and successfully resolved them.

He said that a new period in the reconciliation process has begun since crises have ended and the government and HDP have agreed on what path to follow on numerous issues.

The reconciliation process was initiated by the Justice and Development Party (AK Party) government and began when a cease-fire was signed between the government and the PKK in 2013, followed by a series of democratic reforms to improve the rights of Turkey's Kurdish population. It is reported that over 50 percent of people in the country are in favor of the initiative.