New phase of reconciliation to proceed in February 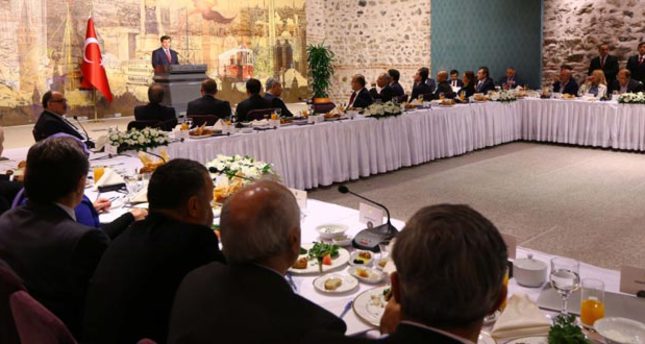 by Daily Sabah Dec 24, 2014 12:00 am
The Turkish government is preparing to announce a new democratization package and create a monitoring committee in February as a final step to bringing a speedy resolution to the reconciliation process following the Kobani protests which took place in October.

The new democratization package will reportedly be announced sometime between the last week of January and the first week of February.

The monitoring committee will convene following the announcement of the package in accordance with the talks between PKK's imprisoned leader Abdullah Öcalan and the Turkish government.

According to Turkish media outlets, the monitoring committee will consist of two groups, one of which will make contacts with the PKK and the other with the Kurdish Communities Union (KCK). It will consist of 16 members in total with eight members in each group. One of the groups will be visiting the İmralı Prison in February, while the other group will be visiting the KCK administration in the Iraqi city of Irbil in the first week of March.

If the talks go smoothly, Öcalan and the armed wing of the PKK will announce their pledge to disarm, which is likely to speed up the process of the reconciliation talks. While the government has explicitly requested the total disarmament of the PKK, the armed organization only pledges to do this in Turkey as long as the conflict in Rojava - in Syrian Kurdistan - continues.

The reconciliation talks gained momentum following the Kobani protests which took place in October 6 and 7. Both the government and the Peoples' Democratic Party (HDP), the representatives of the Kurdish side, have stated that they have reached a consensus on which issues to address.

After a meeting with Deputy PM Yalçın Akdoğan on Monday, HDP's reconciliation committee will be visiting the Qandil Mountains on Wednesday and sharing the revised and scheduled roadmap, as well as the views of Hakan Fidan, the Undersecretary of Turkey's National Intelligence Organization (MİT) and the government with the KCK. The committee is expected to consist of HDP deputies Hatip Dicle, Sırrı Süreyya Önder and Leyla Zana.

Sırrı Süreyya Önder gave a press statement following his meeting with Yalçın Akdoğan and stated that the period of crisis has been left behind and a productive period is ahead. He noted that although all issues have not been resolved, the government and the HDP will continue to resolve issues through dialogue and carry out the process in a speedier, focused and in-depth manner.

Deputy PM Yalçın Akdoğan has also made a statement following the meeting and said that the reconciliation process is proceeding with a strong political will and determination. He added that both sides have expressed their confidence in the process, which is expected to speed up the initiative under the scope of good faith.