Renewed clashes in southeast an attempt to sabotage reconciliation 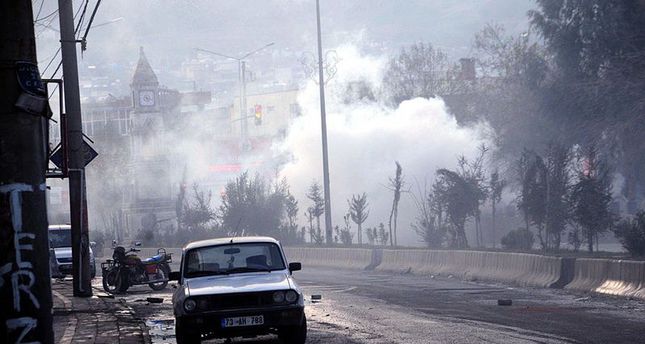 Rival Kurdish groups in the southeast are once again involved in deadly clashes. Experts believe the violence is directed by some PKK members aiming to derail the reconciliation process

Huge differences between rival Kurdish groups once again descended into deadly clashes in the soutneast over the weekend, with experts arguing that the violence was a reaction by a group within the PKK toward the reconciliation process.

Prime Minister Ahmet Davutoğlu yesterday advised people to stay calm and said: "We will not tolerate those who want to transport the clashes and unrest outside Turkey into our country, especially to the border provinces."

The clashes that started at 3:00 a.m. on Saturday in the Cizre district of southeastern Şırnak province killed Yasin Özer, Abdullah Deniz and Barış Dalmış and left three others wounded. Late on Saturday a group of masked people in the town of Silopi in Şırnak province protested the Cizre clashes and closed off the İpekyolu Road. Two people were injured in the protests and police used tear gas and water cannons to disperse the groups.

"Through social media and some broadcasting, certain circles tried to stir up provocations by creating an image of 'there is no control, only chaos in Cizre,' " Davutoğlu told journalists in Konya where he went to attend the Justice and Development Party (AK Party) provincial convention in Hatay.

Peoples' Democratic Party (HDP) Co-Chair Selahattin Demirtaş said that the Cizre clashes were a plot by agents who infiltrated the anti-PKK Free Cause Party (HÜDA PAR) and PKK-affiliated groups to cause tension in the region.

Speaking to Daily Sabah, Kurdish politics expert and columnist Kurtuluş Tayiz said that while the PKK is participating in the reconciliation process with the government, a certain group within the organization wants to continue socio-political engineering in the region: "That's why they want to clear all the other Kurdish groups in the region where they get support from some of the people [only]."

"The PKK recently announced that it will respect public order, and a few days later the Cizre incident happened," Tayiz said, adding that certain provocations are no surprise when the country is on the verge of solving the decades-long conflict.

Deputy Prime Minister Yalçın Akdoğan said on Sunday that the state "will stand firm to ensure public order and security." Stressing the state's strength to ensure the security of life and property, Akdoğan said: "Regardless of the place, whether in Silopi, Cizre or elsewhere, the police and army will be there to protect the citizens." He said all such provocations were aimed at harming the country's reconciliation process.

Earlier in October similar clashes and protests erupted resulting in some 40 deaths. They started when the Syrian border town of Kobani came under attack by the self-proclaimed Islamic State of Iraq and al-Sham (ISIS) and it was alleged that the Turkish government was not doing enough to help the town's Kurdish defenders.

The government's reconciliation process was launched in 2013 and aims to bring an end to the conflict with the PKK.