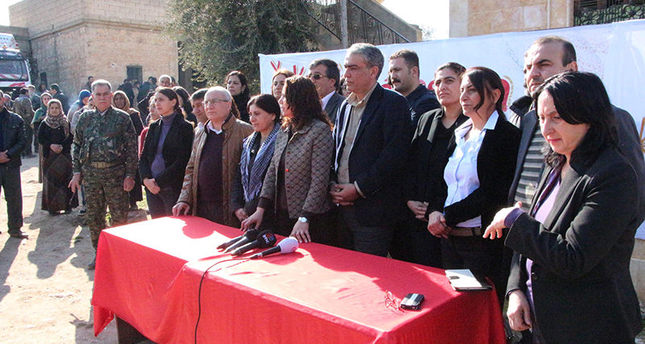 by Daily Sabah Jan 27, 2015 12:00 am
Following the recent reports that the Islamic State of Iraq and al-Sham (ISIS) has been beaten back from the northern Syrian town of Kobani at the end of the four-month battle, 10 lawmakers from the Peoples' Democratic Party (HDP) visited the town to evaluate the latest situation.

The HDP committee, including Şırnak deputy Selma Irmak, Şanlıurfa deputy İbrahim Ayhan and İbrahim Bilici, held talks with the Democratic Union Party's (PYD) Enver Müslim. In a speech, Müslim said that Kobani had turned into a symbol against terrorism around the world.

He added: "We will rebuild Kobani. We would build houses, gardens … We have fought and we will work to build a new town."

After the reports that ISIS was repelled from the town, some civilians, including women and children, have reportedly been seen walking in the war-torn town.