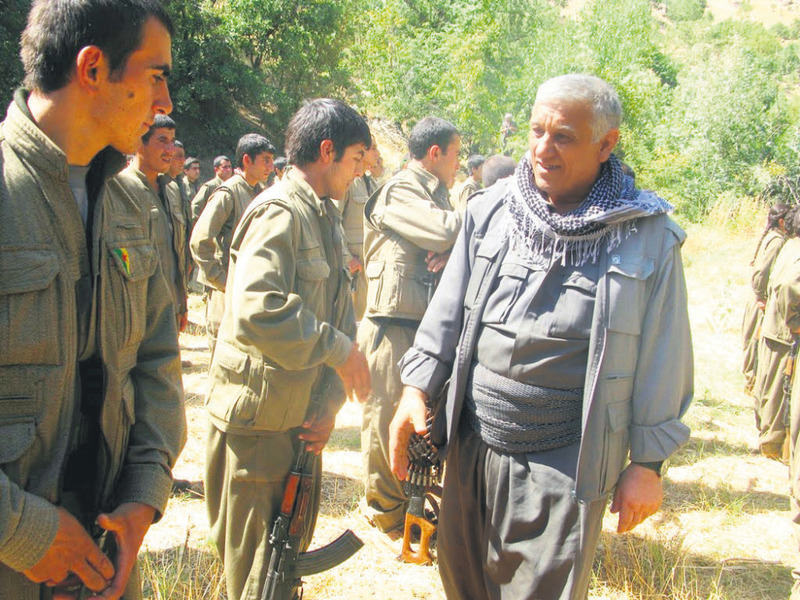 Senior PKK figure Bayık announced that the organization will not engage in fighting any longer and that it is going through a transformation, a move that experts brand as the eventual adaptation to the reconciliation process after remaining in limbo

Cemil Bayık, president of the Kurdistan Communities Union (KCK), which is an umbrella organization that encompasses the PKK, has said they were disillusioned with fighting given it "has brought no gains to any side." In what looks like the first reconciliatory statement indicating a genuine will to achieve peace between the state and the PKK, Bayık's remarks, which were given during an interview with German public television, are significant as they differ in language compared to his previous statements. Bayık is usually known for his aggressive stance against the reconciliation process.

Earlier statements had included harsh rhetoric and had put the fragile reconciliation process, which Ankara and the Peoples' Democratic Party (HDP) are pursuing in a bid to end the decades-long conflict with the PKK, at great risk. Experts agree that the PKK's gradual adaptation to the process and their will to abandon fighting is being reflected in their rhetoric.

Speaking to German public television channels WDR and NDR at the PKK leadership's headquarters in the Qandil Mountains in northern Iraq, Bayık, a senior figure of the organization outlawed in Turkey, said the PKK is going through a transformation. "We are out with war. Neither we nor the state can achieve their goals through fighting."

In a landmark step, Bayık also apologized for the past troubles it caused Germany. "I apologize to the German people on behalf of the PKK. There will be no further incidents as of now."

Experts have appraised Bayık's fresh statements as indicative that the PKK finally coming to understand that the transition from insurgency and fighting to politics to defend Kurds' rights is inevitable. Orhan Miroğlu, a prominent figure in Kurdish politics who served as deputy chairman of the Kurdish Democratic Society Party (DTP), said imprisoned PKK Abdullah Öcalan's call for disarmament is proof enough that the armed struggle is becoming a thing of the past and that the PKK wants a democratic solution to their problems. Miroğlu also adduced the candidacy of PKK leader Öcalan's niece in the upcoming June elections.

"It is a positive statement," Miroğlu said, while stressing that concrete steps that can cement the statement should be taken. "There are still illegal structures such as the courts of the PKK in the east. They have to eliminate them as an indication of sincerity," he added, emphasizing that violence that manifests itself in a variety of ways in the PKK continues.

"Pressuring one to vote for a certain party or sentencing someone in illegal courts can also be considered as violence and should be ended," Miroğlu said.

Kurdish intellectual and author Vahdettin İnce also saw Bayık's statements as promising, adding that the hope such remarks gives may become more frequent, although the rhetoric of conflict can recur from time to time, he warned. "It is not as easy to shift to the language of democracy from the language of war," he said, explaining contradiction in statements delivered by Bayık thus far.

The conflict between the government and the PKK, considered a terrorist group by Turkey as well as the U.S. and the EU, has been ongoing since 1984. It has resulted in some 40,000 to 100,000 casualties, as well as major economic losses for Turkey. The PKK, which at first aimed to establish a Kurdish homeland in southeast Turkey, suffered heavy losses during clashes as well. The violence also extended to Germany, where 4,500 lawsuits have been filed against the PKK in the country since 2004.

Turkey is going through a very sensitive phase concerning its reconciliation process, which was initiated by Ankara as part of its democratization initiatives. The Kurdish conflict is finally being settled thanks to the reconciliation efforts of both the state and the HDP to reach a conclusion. Despite being previously on shaky ground due to provocations, the process has never been as close to reaching a successful conclusion until when Öcalan, exerting his influence and called for a congress to convene to abandon arms in a message read out by HDP Deputy Sırrı Süreya Önder during March's Nevruz festival. The move was hailed by the majority of the country as well as the ruling Justice and Development Party (AK Party) , HDP officials and most of the main opposition. However, Bayık's statements during the process as well as after Öcalan delivered his message raised some eyebrows over the sincerity of the PKK's message to abandon their arms.

In an interview with the German network ARD on October 11, 2014, Bayık was alleged to have said that the PKK might take up arms against Turkey if they continued their policy in Syria's Kobani, which he said shortly after pro-Kobani protests that claimed dozens of lives in Turkey's southeastern provinces. The protests, which erupted when some Kurds demanded more support from the state for fellow Kurds in Kobani fighting Islamic State of Iraq and al-Sham (ISIS) militants, put the reconciliation process in a very delicate position. Alluding to the incidents, Bayık triggered further tensions when he said: "We have sent our militants back to Turkish territory," after the group had pledged to withdraw.

Speaking to a Turkish daily on March 14, after the historic joint press statement including Öcalan's will to abandon arms, Bayık raised concerns regarding the efforts by saying "a face-to-face meeting with Öcalan" would be a necessity to proceeding with the reconciliation process, and demanded that Öcalan be released. Bayık also talked to İMC TV, during which he was quoted as saying: "There will be no laying down of arms without Öcalan in the congress."The latest in a series of similar statements increasing the pressure on the government included the statement: "They are ready to end the armed struggle today," but did not mention laying down arms.

The reconciliation process was launched by the AK Party in 2012 when former prime minister and current president, Recep Tayyip Erdoğan, announced in December 2012 that the government was holding peace talks with Öcalan. Roughly three months after this announcement, Öcalan delivered a landmark message during Nevruz celebrations in March 2013 in which he called for a cease-fire. In July the following year, Parliament passed a bill to support the country's ongoing reconciliation process to end terrorism.
Last Update: Apr 10, 2015 11:29 pm
RELATED TOPICS