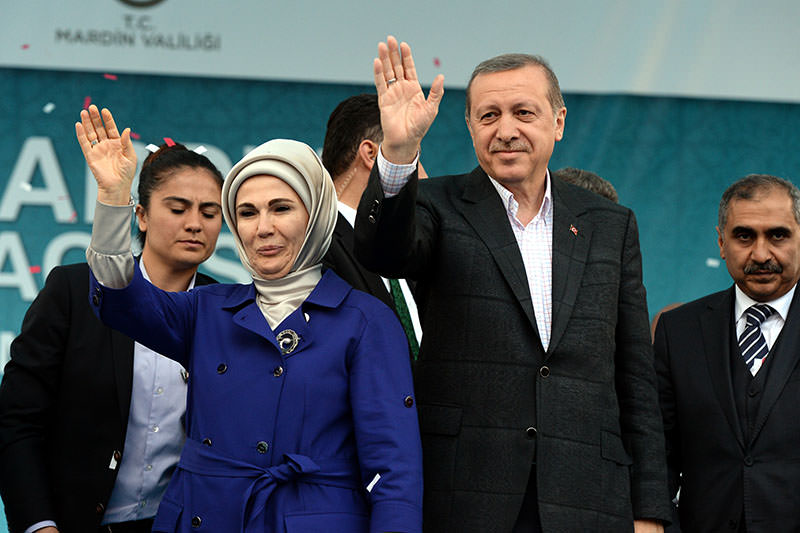 | AA Photo
by Ayşe Şahin May 04, 2015 12:00 am
During his visit to the southeastern province of Mardin on Monday, President Recep Tayyip Erdoğan said the government took the necessary steps in the reconciliation process it launched to end the conflict between the outlawed PKK and the state, but it along with the and Peoples' Democratic Party (HDP) failed to abide by their promise. The government launched the reconciliation process to bring to an end the Kurdish question that claimed tens of thousands of lives for decades. The process was on the brink of reaching a conclusion, as the leader of the PKK announced in his Nevruz message in March that it was high time to lay down their weapons and continue their cause via democratic means. However, the process that seemed to have been finally cemented after numerous provocations was crippled again after the recent Ağrı attack by the terrorist group.

"We did all we can but the separatist group and its political extension did not keep their promise," Erdoğan said, adding democracy and arms cannot exist together.

Erdoğan highlighted the reforms his party implemented while he was the prime minister, which aimed to enhance the standard of living of every community, including Kurds, as part of the efforts to invigorate Turkey's democracy. Erdoğan underscored that the Justice and Development Party (AK Party) addresses the needs and concerns of every community in Turkey without discrimination. He said, during his tenure as prime minister, Kurds were given back their rights that were once taken from them.

Erdoğan has also scorched the main opposition Republican People's Party (CHP) and pro-Kurdish HDP for their election promises that seek to ban certain religion-based institutions, claiming they are disrespecting the faith of the Turkish society. He said the mindset that aims to curtail a community's freedom to practice religion contradicts the parties' so called pursuit of freedoms.

Speaking in the eastern province of Siirt, Erdoğan slammed the leader of the HDP, Selahattin Demirtaş, for his pledge to abolish the Presidency of Religious Affairs (DİB), in what looks like a strategy to win the votes of the Alevi community, which is not willing to be attached to the body.

As Turkey approaches the June 7 general elections, the parties have accelerated their election campaigns and stepped up their work to garner votes from the public. The parties, in common, are leaning on economic issues and seem to be aiming to receive votes by addressing economic concerns, taking into consideration the promises they have already made. But the parties have some target sections of the population, who they think are more likely to vote for them. And as the elections draw closer, parties are being attentive to addressing their main concerns.

HDP leader Demirtaş has vowed recently to shut down the DİB, triggering reactions from Turkey's conservative circles. In response to Demirtaş's remarks, Erdoğan said, "[The HDP] says it will close the [presidency of] religious affairs. The other [CHP] says it will close imam-hatip schools but [denies] ever saying that. This is abuse," Erdoğan said. He claimed that it is thanks to the DİB that terrorist organizations like the Islamic State of Iraq and al-Sham (ISIS) and Boko Haram cannot carry out their activities in Turkey. Erdoğan later highlighted how previous governments had hampered imam-hatip schools, and the AK Party had removed the obstacles that were in their way. "You said you were on the side of freedom? Why are you bothered now? Don't interfere in parents' choice of school to send their children," Erdoğan said, adding that Demirtaş is also abusing the religious Kurdish community.
Last Update: May 05, 2015 10:18 am
RELATED TOPICS