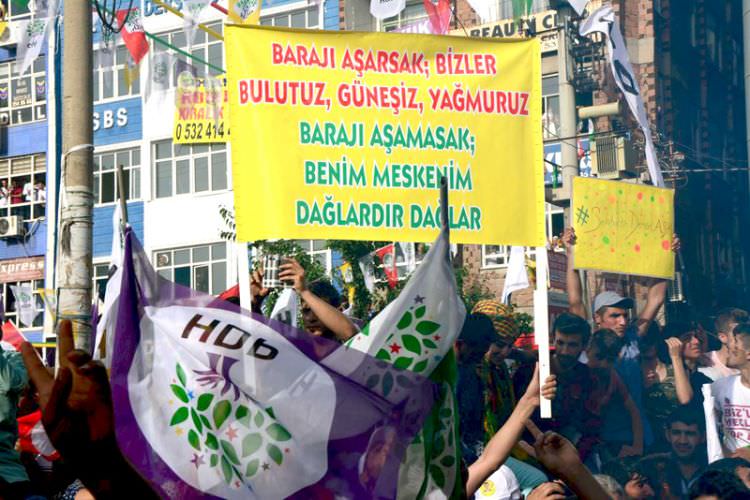 HDP Co-Chair Demirtaş, who took the spotlight with the peace messages he delivered in his campaign ad, remains mute regarding the dozens of reported attacks by his supporters in eastern provinces, purportedly giving consent to the pressure put on locals to vote for the party

With only two days left until the general elections that will determine the future of Turkish politics, the Peoples' Democratic Party (HDP), which is vying to pass the 10-percent election threshold hurdle to enter Parliament as a party, is resorting to pressure and violence to make its way into Parliament. The party, which is backed by the outlawed PKK, adopted democratic rhetoric to appeal to the electorate in the west, but intensified pressure in eastern provinces in an attempt not to lose its vote to the ruling party, which is also supported by a considerable number of locals in the region. There have been many reported threats and attacks thus far in the east, raising concerns of the security of the elections, and HDP Co-Chair Selahattin Demirtaş, who is already notorious for triggering violence during the Kobani protests that killed dozens, has stayed silent on the attacks committed by supporters, which some see as an apparent display of approval of the aggression.

Besides pressurizing people to vote for the party, the party's supporters have gone even further to intimidate the entire country by halting the reconciliation process the government is pursuing with the PKK to end the decades-long armed conflict between it and the state, and threatening that if the party fails to enter Parliament, they will take up arms.

"If we pass the threshold, we are the sun, the clouds and the rain. If we don't, our quarters are the mountains," a massive banner hanging in an eastern province reads, with "mountains" standing for the PKK headquarters in northern Iraq's Qandil Mountains. Another banner in Van province features a tap running with blood with a message that reads: "Take precautions beforehand," making a reference to potential violence that might erupt if the HDP does not pass the threshold. Another one with the HDP logo beneath the message reads: "It is dangerous for other parties to enter [Parliament]."

Previously, the HDP ran for seats in Parliament with individual independent deputy candidates to avoid the election threshold obstruction, but this time, taking a major risk, it is running as a party. Demirtaş, well aware that every single vote counts for the party to pass the threshold, has been employing the language of peace and democracy with the media and the west of the country, feeling its voting base in eastern Turkey is already strongly guaranteed. However, his embracing and peaceful messages fail to convince many sections of the public as the party has undertones of violence and aggression. Demirtaş is also still being accused of calling pro-PKK militants to take to the streets during the Oct. 6-7 protests that led to the deaths of roughly 50 people. The reported threats, pressure and acts of violence conducted by party supporters and the PKK has diminished already-blighted trust for the leader.Recently, a deputy from the socialist Patriotic Party (VP), originally the Workers Party, running for the eastern province of Hakkari, Namık Dereli, has resigned from his party and joined the HDP. The president of the party, Doğu Perinçek, claimed that what lies beneath Dereli's resignation was an armed threat by the HDP.

"He was forced to resign under the threat of arms. [Dereli] was previously telling us about how the PKK was intimidating him for the last few weeks. There were threats such as: 'You will be put on trial in the court of the public, you will be executed by shooting, none of your family will be able to live here.' "

Criticizing the HDP for its reported incessant threats and pressure on the public, Perinçek said: "I ask the public, how could you lead terrorists to Parliament when they are engaged in arms and threats," and continued: "I warn you, every vote for the HDP is support given to terrorism."

Some other reported incidents in the east are that in Diyarbakır province, members of the PKK raided a local cafe injuring one person in the leg. Two people from a rival pro-Kurdish party were attacked while they were trying to hang a poster. In Bismil, a district in the province, the cousin of the head of the district from the Justice and Development Party (AK Party) was kidnapped and released later. In the Ergani district, an office of AK Party deputy candidate Mustafa Elgörmüş was attacked with a bomb. In Silvan, PKK members left a local blindfolded and handcuffed in a cemetery, failing to complete the kidnapping. Some of the people who wander under the guise of poll takers, marked crosses on the doors of locals who said they were not going to vote for the HDP in the elections.

In Siirt province, a similar incident took place. People pretending to conduct a poll threw stones at the working places of those who would not vote for the party. Four members of the AK Party youth branch were assaulted by HDP members. An AK Party election office in the Veysel Karani region was set on fire. AK Party member Yasin Aktay's campaign vehicle was also attacked with stones. In Ağrı province, independent deputy Cemal Kaya was attacked with stones by HDP members. In Mardin, two hand grenades were thrown at the AK Party district election office.
Last Update: Jun 05, 2015 1:52 pm
RELATED TOPICS