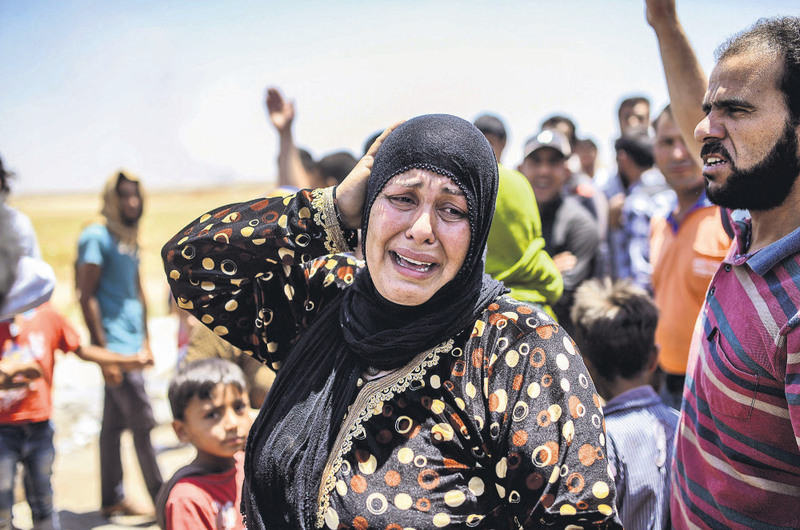 Civilians from Tal Abyad are fleeing the clashes between ISIS and the PKK-linked PYD. Turkey fears the PYD is exploiting the chaos to change the ethnic make-up of the region.
by Erdal Şafak Jun 14, 2015 12:00 am

President Erdoğan is concerned about the mass displacement of Turkmens and Arabs as a result of Kurdish advances in Tal Abyad, and said the operation against ISIS is replacing the population with PKK-affiliated Kurds, claiming they will become a threat to Turkey

President Recep Tayyip Erdoğan has once again voiced his concern over an advance of the Kurdish Democratic Union Party (PYD) and its People's Protection Units (YPG), which he bills as an extension of the outlawed PKK, toward Tal Abyad in Syria, a border town under the sway of the Islamic State of Iraq and al-Sham (ISIS), saying the coalition forces conducting airstrikes in the region to push back the advance of the militants seem like they are targeting Turkmen and Arab Syrians who are forced out of their homes due to the clashes. Erdoğan, speaking to journalists on his way back from his two-day official trip to Azerbaijan, said he is worried that the vacuum left behind is being filled with PYD and PKK forces, which he noted might blight the security of Turkey's borders. "This does not bode well. There is an aura that Arabs and Turkmens are being targeted. There are 15,000 Arabs and Turkmens who have fled the region and crossed to Turkey. The PYD and PKK are being placed in the evacuated region. This leads to a structure that poses a threat to our borders," Erdoğan said calling on all segments to act according to the sensitivity of the country.

The YPG, backed by Syrian rebels and airstrikes from the U.S.-led coalition fighting ISIS, edged closer on Saturday to Tal Abyad within just a few kilometers southeast of the town, according to reports. The continuing clashes are forcing residents to abandon the town and flee either to Raqqah or north to the Turkish border.

Displaced Syrians have been congested on the border and are seeking to enter Turkey, to no avail, as Turkey is refusing them entry so as not to be part of the apparent purpose to change the demography of the region. Meanwhile, ISIS militants are reportedly pushing residents to return to the town, thinking that a civilian presence might prevent airstrikes by the coalition forces.

Erdoğan initially voiced his concern about the tension at the Syrian border a couple of days ago: "The West, which bombs the Arabs and Turkmens, unfortunately places the terrorist PYD and PKK in Tal Abyad. How could we be alight with that? How could we consider the West sincere?"

Turkey's stance against the PYD has been strict since the U.S.-led coalition, which also included Turkey, was formed to fight ISIS.

While the U.S. was providing assistance to Kurds fighting ISIS, Turkey refrained from extending help to those it designates as terrorists. Instead, Turkey came up with various ideas to cement cooperation in the fight against ISIS, one of which was to use peshmerga fighters from northern Iraq's Kurdistan Regional Government (KRG) in the fight for Kobani and allow their passage through Turkey to Syria.

The YPG expelled the ISIS attack on the border town of Kobani in January. Since then, the YPG has emerged as the most significant partner on the ground in Syria for the U.S.-led alliance that is trying to roll back ISIS advances.

However, Turkey has been hesitant in empowering the YPG in the name of fighting ISIS, since it considers the group as an offshoot of the PKK. Ankara fears that a strong structuring in the region might put the security of borders in jeopardy.

U.S. State Department spokesman Jeff Rathke recently raised his concerns over the reports saying a demographic change committed by the PYD forces in Syria's Tal Abyad where intense clashes with Kurds and ISIS are ongoing.

Rathke said they are aware of the reports regarding ethnic cleansing in the area and are concerned by them. "We're seeking more information about them," he said.

A Turkish official, speaking to Reuters on Thursday about the fighting in and around Tal Abyad, said: "Arabs are being pushed away as Kurds flow into the area. Moving forward, the Arab population of the region might not have a place to go back to."
Asked about these assertions, Rathke said he is not in a position to confirm the details of the reports and added: "We have raised our concerns with the PYD about their human rights record, including intimidation of rival Kurdish political parties in the past."
Last Update: Jun 14, 2015 9:59 pm
RELATED TOPICS