by Daily Sabah Jul 04, 2015 12:00 am
The outlawed PKK tries to recruit youngsters with propaganda brochures, according to local media outlets and Twitter users currently residing in eastern and southeastern cities and rural areas.

The PKK militants handed out propaganda brochures which read "When, if not now? Who, if not you? " in Eastern Turkey. The terrorist organization and PKK-linked Patriotic Revolutionary Youth Movement (YDG-H) tried to brainwash and recruit youngsters of the region with their propaganda brochures. 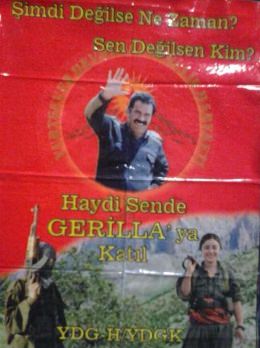 The brochures also mention the jailed PKK leader Abdullah Öcalan who currently resides in a maximum security prison in İmralı Island in the Marmara Sea. "For the freedom of Apo, (a nickname given to Abdullah Öcalan) join the guerilla forces," read the brochures.

According to local media outlets and people of the region, PKK uses young women to give out the propaganda brochures.

PKK is a Kurdish nationalist terrorist organization based on Marxist-Leninist ideology, and its attacks have claimed more than 40,000 lives of innocent civilians and soldiers since its establishment in 1978.
Last Update: Jul 04, 2015 7:17 am
RELATED TOPICS